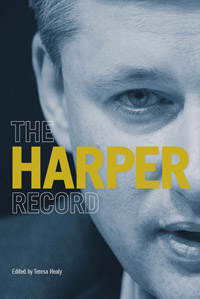 This book is one in a series of CCPA publications that have examined the records of Canadian federal governments during the duration of their tenure. As with earlier CCPA reports on the activities of previous governments while in office, this book gives a detailed account of the laws, policies, regulations, and initiatives of the Conservative minority government under Prime Minister Stephen Harper during its 32-month term from January 2006 to September 2008.

The 47 writers, researchers and analysts who have co-written this book probe into every aspect of the Harper minority government’s administration. From the economy to the environment, from social programs to foreign policy, from health care to tax cuts, from the Afghanistan mission to the tar sands, from free trade to deep integration, and to many other areas of this government’s record, the authors have dug out the facts and analyzed them.

The Harper Record was necessarily researched and written long before an election was called, but its publication does coincide with an election campaign and thus may help citizens to make informed choices about the future of their country. Regardless of the election outcome, its contents will continue to be relevant between elections. In detailing what a minority Conservative government really did, or failed to do, it may serve as a guide and model for future elections.

Notes
About the Authors