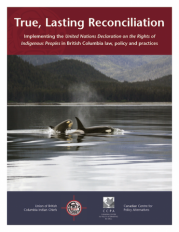 Implementation of the United Nations Declaration on the Rights of Indigenous Peoples is a central political and public policy issue around the world. The BC government has committed to fully adopting the UN Declaration and this ground-breaking report, for the first time, outlines what implementation could and should look like in BC law, policy and practices.

The report challenges politicians, officials, advisors, experts and the public to explore a range of avenues about how the Declaration can be given meaning on the ground in constructive, impactful and practical ways.

Inspiring the report’s research is a strong belief there is significant unfinished business to address the legacy of colonization of Indigenous peoples in Canada, and that addressing this legacy requires significant changes to legal and policy frameworks. The report takes stock of current efforts to implement the UN Declaration in British Columbia, identifies roles and responsibilities in implementation efforts, and makes recommendations on actions going forward. In particular, the report outlines what should be core components of a framework Act that embeds the UN Declaration in BC law.

There is significant agreement in Canada that the Truth and Reconciliation Commission Calls to Action must be adopted. These include the call for the federal, provincial, territorial and municipal governments to fully adopt and implement the UN Declaration.This means that one cannot be in support of the Calls to Action without also being in favour of full implementation of the UN Declaration