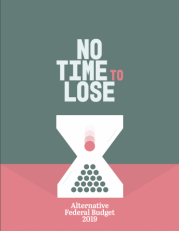 With the country facing significant and unpredictable headwinds going into another federal election year, the 2019 Alternative Federal Budget (AFB) shows that Canada can boost competitiveness and encourage innovation by investing in people, not by giving corporations more tax cuts.

The progressive and cost-effective measures in the 2019 AFB will narrow the gap between the rich and the rest of us, lift close to a million people out of poverty, raise revenues by closing unfair and expensive tax loopholes, and create 500,000+ jobs, many of them in the low-carbon jobs of the future. The alternative on offer—for Canada to copy the Trump administration’s tax cuts and deregulation—is far too expensive to even consider.

Under the AFB plan, the 95% of Canadian families who earn less than $254,000 a year will be better off on average due to both tax and transfer changes, and new social programs including a long overdue national pharmacare plan, universal child care and free tuition. This can all be achieved while maintaining historically low deficits.

The fully costed AFB plan shows that Canada can afford to: