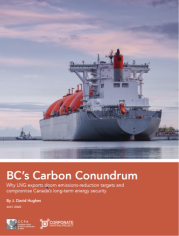 The British Columbia government has pledged to reduce greenhouse gas emissions by 80 per cent from 2007 levels by 2050 through its CleanBC Plan and the federal government has pledged that Canada will be net zero by 2050. But as this report shows meeting these targets is not possible with the currently forecasted oil and gas production levels. Even without accounting for LNG exports, emissions from oil and gas production alone would exceed BC’s 2050 target by 54 per cent—and that is if all other sectors of BC’s economy reached zero emissions by 2042. If emissions from producing and liquefying the gas required for LNG Canada are added, BC’s 2050 target would be exceeded by 160 per cent, even if emissions from the rest of the economy are reduced to zero by 2035.

The analysis in the report, which accounts for the emissions from the production, processing, pipeline transportation, liquefaction, shipping and regasification of LNG shows that exporting BC LNG to Asia will not reduce global climate emissions as industry claims, and in fact will make global warming worse over at least the next three decades. The report concludes that Canada’s practice of ramping up oil and gas production in the hope of financial gain is not a credible plan to meet the long-term energy needs and emissions-reduction goals of its citizens.