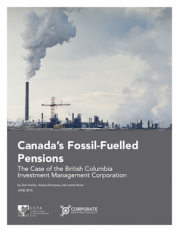 The British Columbia Investment Management Corporation (BCI), formerly known as bcIMC, is a financial institution most British Columbians aren’t aware of. Its actions, however, are essential to BC’s and Canada’s ability — or inability — to address the climate change crisis.

BCI is the fourth largest pension fund manager in Canada and controls one of the country’s largest consolidated pools of wealth worth over $135.5 billion, including almost all of the province’s public sector pension funds. Given the threats caused by climate change, this report asks if BCI is investing these funds in ways that support the shift to a 2°C global warming limit that Canada committed to in the Paris Agreement.

Unfortunately, the answer is no. This report shows that BCI’s claims of responsible investment are more talk than walk, as its actions are not sufficient considering the risks posed by climate change to its portfolios, its beneficiaries or the broader society. Instead of curbing its investments to align itself with the Paris Agreement, BCI has been increasing its oil and gas holdings.

Since BCI’s duty is to act in the best financial interests of plan members, its carbon-heavy holdings mean it may be breaching its statutory duty of prudence.