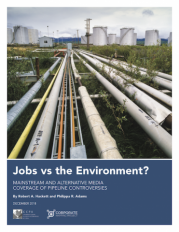 Jobs vs the Environment?

Much of the argument advanced in support of expanding Canada’s fossil fuel production centres on job creation and economic benefits. Politicians, pundits and corporate spokespeople who support fossil fuel infrastructure projects—such as new oil and gas pipelines—often evoke this rhetoric when they appear in the media.

This study examines how the press—including corporate and alternative outlets—treats the relationship between jobs and the environment. Focusing on pipeline projects that connect Alberta’s oil sands to export markets, it also asks which voices are treated as authoritative and used as sources, whose views are sidelined, which arguments for and against pipelines are highlighted, and what similarities and differences exist between mainstream and alternative media coverage of pipeline controversies.

These are important questions as, even in the internet era, traditional “legacy media” outlets continue to heavily influence voters and political actors.

——
This study is part of the Corporate Mapping Project (CMP), a research and public engagement initiative investigating the power of the fossil fuel industry. The CMP is jointly led by the University of Victoria, Canadian Centre for Policy Alternatives and the Parkland Institute. This research was supported by the Social Science and Humanities Research Council of Canada (SSHRC).