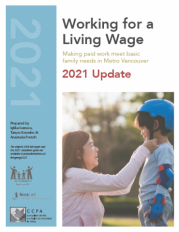 Living expenses in BC, particularly for housing, are continuing to rise for families, meaning higher wages are required for working families to afford their basic needs.

This new report, published in partnership between the CCPA-BC and Living Wage for Families BC, calculates the living wage in 14 communities across BC and finds that BC’s minimum wage of $15.20 per hour is less than the living wage in each of those communities. It also shows that family expenses have increased since 2019 in Metro Vancouver and Victoria at a rate higher than inflation.

In addition to looking at the costs of basic family needs, the calculations in this report include changes in government investments that make life more affordable for families. Recent government investments in child care and other policy measures to support families have helped to prevent a greater increase in the living wage. It finds that further increasing those investments, with initiatives like $10-a-day child care, would reduce the living wage for families.

The report calls on both government and employers to play a part in moving toward a living wage for all British Columbia families.