OTTAWA—Parents in some cities could be in line to save tens-of-thousands of dollars annually under a proposed national child care plan, according to a new city-by-city savings analysis from the Canadian Centre for Policy Alternatives (CCPA).

“For families with one child in care, much less two or more, these types of savings can be tremendous. For the first time outside of Quebec, Canadian parents have the chance of seeing something they’ve never seen before: affordable daycare fees,” says CCPA Senior Economist David Macdonald, who authored the analysis.

The April federal budget announced plans to create a national child care plan that would drop fees by 50% by 2022, to $10-a-day by 2026. The new analysis finds that, if implemented, such a plan would mean that parents in some cities could save over $10,000 annually, per child, by 2022 and almost $20,000, per child, by 2026. Families with the youngest children would see the largest savings, as the fees for younger children are generally higher.

Parents can explore this interactive map of the findings that show the potential savings across 37 cities in Canada where child care fee data exists. The highest child care fees, and therefore largest potential savings, are found in the Greater Toronto Area (GTA): parents in Toronto could save $11,200 a year by 2020, and in GTA suburbs, the average savings would be $9,100 annually for an infant. By 2026, parents in Toronto could save $19,800 a year on an infant space, or $15,600 in GTA suburbs.

In B.C. and Alberta, average savings in the big cities would be $6,000 by 2022 and $10,000 by 2026 for families with an infant. Even in Manitoba and P.E.I., which already have set fees subsidized by those provinces, parents could see those fees decline further. Average child care savings in Winnipeg by 2022 would be $3,900 per infant, with savings of $4,400 a year in Charlottetown.

See the list below for a full city-by-city look at potential savings.

The first federal-provincial agreement to deliver $10-a-day child care was announced July 8 between Ottawa and the British Columbia government, followed by the announcement of an agreement with Nova Scotia on June 13. To make the national plan a reality, the federal government will have to negotiate agreements with the rest of the provinces and territories, a number of which have already outlined concerns about signing on to a deal.

“Make no mistake: a national child care plan targeting fees will deliver more savings to parents than a tax credit or a monthly cheque ever could,” adds Macdonald.  “Reducing fees must be part of a broader plan, one that includes capital funding for more spaces but it must also include higher wages for childcare workers to attract and retain them as the system expands. Otherwise child care waitlists will explode.”

The analysis notes that, paradoxically, “cash for care” approaches using a tax credit or a monthly cheque, have in the past often led to even higher child care fees in the long run, and do nothing to create new child care spaces, especially in cities with long wait lists.

The new CCPA child care savings analysis and interactive map can be found online. The CCPA’s most recent data on child care fees in Canada is available at policyalternatives.ca.

The CCPA is an independent, non-profit charitable research institute founded in 1980. 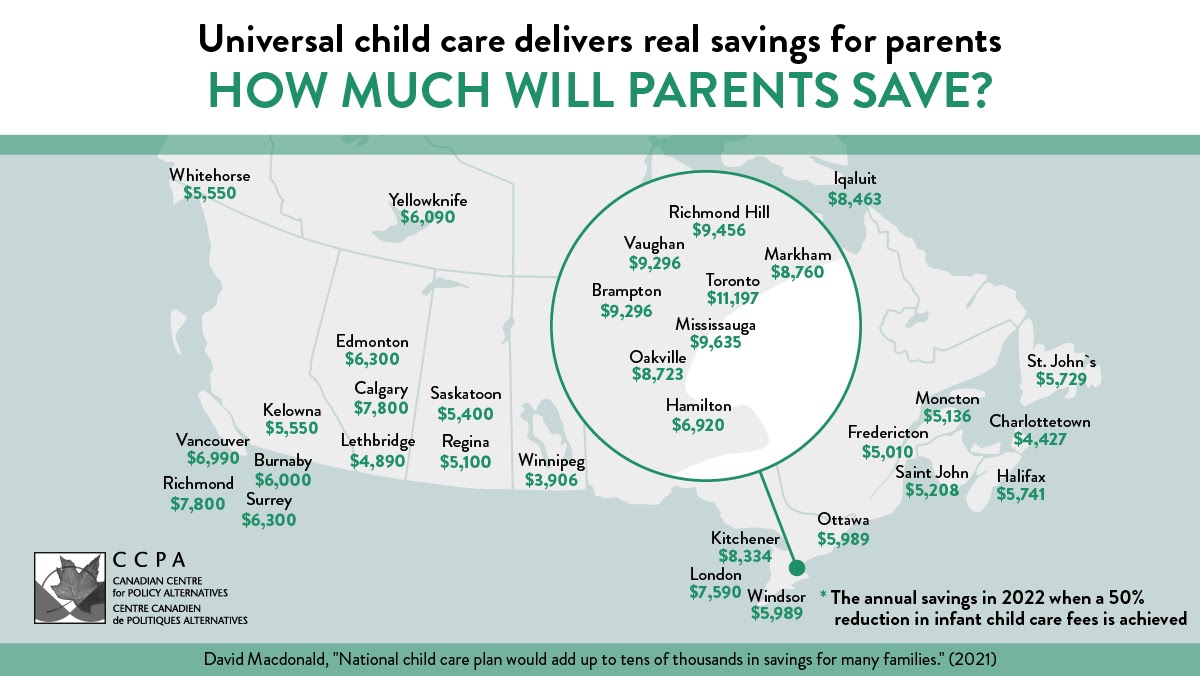