Richest 20% of BC households have biggest carbon footprint

(Vancouver) The richest 20% of BC income earners are responsible for almost double the greenhouse gas (GHG) emissions of those in the lowest income group, according to a new Climate Justice Project brief from the Canadian Centre for Policy Alternatives.

The findings of By Our Own Emissions: The Distribution of GHGs in BC show an increasing carbon footprint in proportion to income and suggest that global warming policies must take inequality into consideration.

“Policy makers tend to view GHG emissions through an ‘average’ or middle-income lens, but that doesn’t give us insight into who is actually doing the emitting,” says report author and CCPA-BC Senior Economist Marc Lee.

“If climate policies are going to be effective, they need to be fair,” says Lee. “That means high-income British Columbians should bear the greater burden of reducing greenhouse gas emissions.”

By Our Own Emissions: The Distribution of GHGs in BC is available for download from www.policyalternatives.ca. This study is part of the Climate Justice Project, a five-year research initiative of the Canadian Centre for Policy Alternatives and the University of British Columbia. 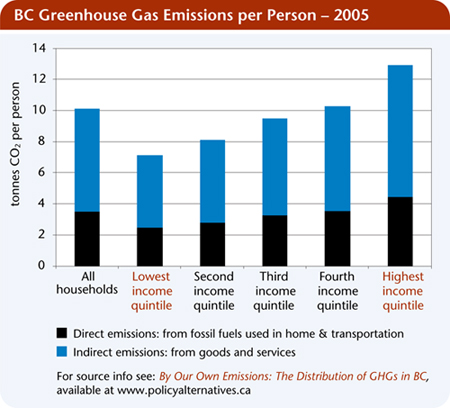