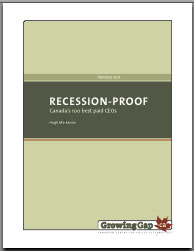 The study looks at 2009 compensation levels for Canada’s best paid 100 CEOs and finds they pocketed an average of $6.6 million during the darkest period of the recession – a stark contrast from the total average Canadian income of $42,988.

At this rate of reward, this handful of elite CEOs pocket the equivalent of the average Canadian wage by 2:30 pm on January 3 – the first working day of the year. Read the report here.