We write this statement as members of the Campaign 2000 steering committee, authors, and publisher of the Annual Nova Scotia Report Card on Child and Family Poverty.

We are outraged by the continued systemic violence and police brutality against Black people and hostile responses to protests against anti-Black racism and for civil liberties.  We grieve with our Black and Indigenous colleagues and community members who are impacted.

We denounce all forms of anti-Black racism, colonialism and white supremacy.  While much of the focus has been on the United Stated, we know that these systems have a long history and deep roots in Canada where Black and Indigenous Peoples have long been denied their human rights.

As is stated in the United Nations Report of the Working Group of Experts on People of African Descent,“Canada’s history of enslavement, racial segregation and marginalization of African Canadians has left a legacy of anti-Black racism and had a deleterious impact on people of African descent, which must be addressed in partnership with the affected communities.” We are almost halfway through the International Decade for People of African Descent (2015-2024) and much more needs to be done so they can fully and equally participate in all aspects of society.

We know that Black and Indigenous communities have much worse health outcomes and exponentially higher rates of poverty than white Canadians and that this is a both a result of and a strategy to maintain systemic oppression.  At 40%, the rate of poverty among Black children in Nova Scotia is the second highest in the country. This is compared to a provincial child poverty rate of 22.2%. 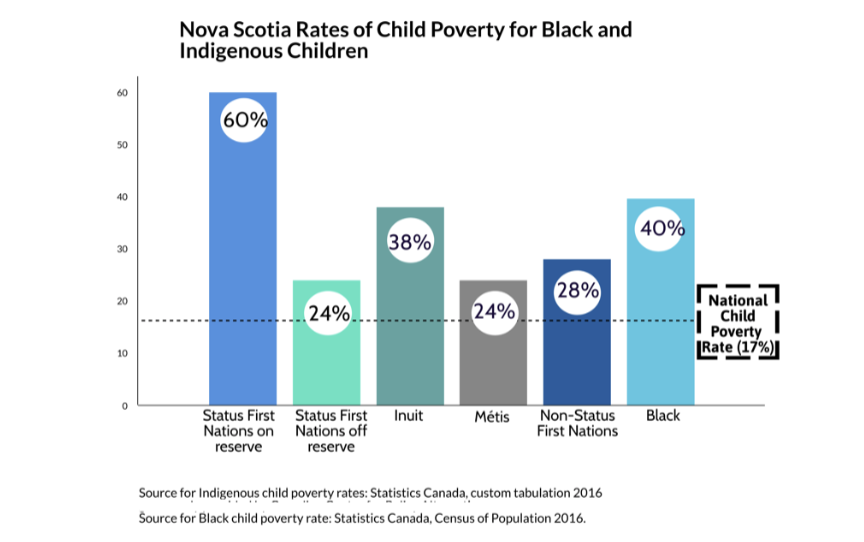 We have a responsibility to ensure that our work in these areas contribute to ending anti-Black and anti-Indigenous racism, which cannot be done without critical self-reflection, education and dialogue.

We recommit to learn from and work with Black and Indigenous community members, service beneficiaries, educators, leaders, policy makers and organizations to ensure prevention and intervention services respond to their needs and are barrier-free.  We will work with them to ground our research and develop policy solutions that dismantle systemic violence and colonialism and lead us towards true democracy, safety and inclusion.

We support the calls to declare anti-Black racism a public health crisis.

We support the calls for the federal government to:

A pdf version of this statement is available to download here.
The press release from Campaign 2000 can be found on their website.