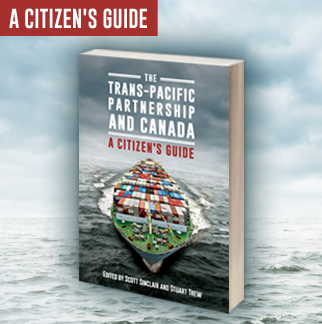 In February 2016, Canada was one of twelve countries to sign a controversial trade and investment deal called the Trans-Pacific Partnership. But the debate over whether it should be ratified rages on — in the U.S., where both major presidential candidates oppose it, and in Canada, where the Trudeau government is consulting Canadians before it decides.

Edited by CCPA's Scott Sinclair and Stuart Trew,The Trans-Pacific Partnership and Canada, brings together experts in many public policy fields and goes beyond the media hype to explore how the deal would impact environmental protection, health care and other public services, Canada’s cultural industries, labour rights and the workforce, human rights and the democratic decision-making process generally.

The Trans-Pacific Partnership and Canada: A Citizen's Guide is available now from Canadian publisher, Lorimer.

Chapter 1: Will the TPP be Good for Canadian Trade? John Jacobs

Chapter 3: The TPP and Regulation of Medicines in Canada, Joel Lexchin

Chapter 4: The TPP and the Environment, Jacqueline Wilson

Chapter 5: Does the TPP Work for Workers? Laura Macdonald and Angella McEwen

Chapter 9: The Trouble with the TPP's Copyright Rules, Michael Geist