A new CCPA study examines historical data on business investment and cash flow from 1961 through 2010, and, using econometric techniques, finds no evidence in the historical data that lower taxes have directly stimulated more investment. 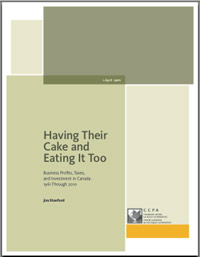 Business fixed capital spending has declined notably as a share of GDP and as a share of corporate cash flow since the early 1980s—despite repeated tax cuts that have reduced the combined federal-provincial corporate tax rate from 50% to just 29.5% in 2010.

According to the study, by economist Jim Stanford, the Conservatives’ proposed 3-point reduction in corporate tax rates would cost the public purse $6 billion per year, yet only stimulate about $600 million of new business investment annually.

If the federal government spent $6 billion on public infrastructure instead of corporate tax cuts, the total increase in investment would be more than ten times as great as the increase in private investment from tax cuts alone. This includes the new public investment itself ($6 billion), as well as an additional $520 million in private business investment that would be stimulated through the positive spin-off effects of the resulting economic growth.