This fall, British Columbians will get to vote on whether we want a new electoral system for our province. What an incredible opportunity.

Between October 22 and November 30, BC voters will be able to vote in a mail-in referendum. The ballot will look something like this: 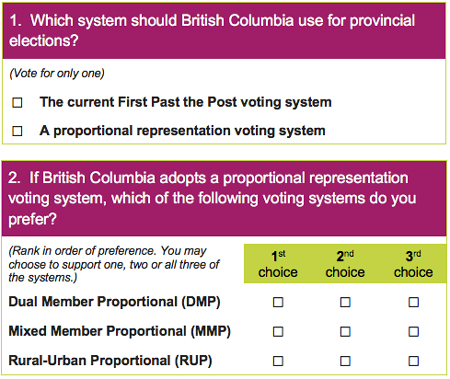 We at the CCPA-BC are big fans of proportional representation (pro rep). Our research and analysis on election issues have led us to determine that pro rep would much better reflect the real preferences and backgrounds of BC voters—and we’re so excited for the possibility of a system where all our votes count, our politicians cooperate, and our governments get only the power they deserve.

For too long, powerful groups have had a voting system that privileges their interests. Our current system fosters “winner-take-all” competition, and concentrates political power in the hands of parties that do not necessarily have the support of the majority of voters—which means less representation, less accountability, and less collaboration between elected officials.

BC can do better.

The ‘No’ side, however, has been telling us otherwise: that the whole affair is frightfully confusing and “too complicated” for British Columbians to navigate, that first-past-the-post has been the only thing preventing far right “extremist” political parties from taking power, that our governments will be forever unstable, and other distracting, fear-mongering, and kind of insulting (right?) claims.

In response, we’re doing what we nerds do best: Research. Writing. Sharing.

We’re putting together a series that sets the record straight, busts myths, and helps readers become more confident about the choices we get to make this fall.

So far, we’ve published the following:

You can find all of that work (and keep an eye out for more) at: policynote.ca/pr4bc

Between now and the referendum end-date, you’ll hear a lot more from us on this critically important topic. We plan to publish, garner as much media coverage as we can, and give public talks on the subject as often as possible.

But this historic opportunity will slip away unless every one of us does what we can. Please talk-up the need for this game-changing shift with your friends, co-workers and family. Other organizations are also looking for volunteers, including Leadnow, VotePRBC and Fair Vote Canada BC.

We have a unique opportunity to choose a made-in-BC electoral system—one that captures how we want to balance local representation with proportional outcomes, and which lets us finally vote our values.

The only things that can stop us are misinformation and fear. So please: learn as much as you can, share your knowledge with others, and then vote for what you truly want this fall.