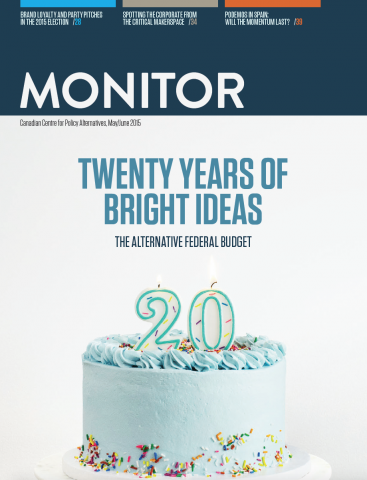 After more than two decades, and on this 35th anniversary of the CCPA, the Monitor is rebooting to seize new political opportunities and adapt to technological challenges.

Neoliberalism produced great wealth at the cost of extreme inequality and existential pressure on the Earth’s ecosystems. It has put a drag on traditional growth everywhere while leaving millions in poverty. When even the International Monetary Fund recognizes the status quo cannot hold, you know the space for alternatives has expanded. That is, there is a wider and more receptive audience for the kinds of economic, social and environmental policy proposals the CCPA has been putting on the table for over three decades.

To reach that audience, in a post–Web 2.0 age, the Monitor needed to be much more than a bulletin, so we’re giving it a little pop. We will continue to cover inequality, climate change, trade and investment agreements, technology, labour and other issues, but with a much higher quotient of CCPA research and original feature articles you won’t find anywhere else.

In-depth thematic issues like this month’s feature on the Alternative Federal Budget will bring together a wide variety of perspectives that enhance and challenge our understanding of the world. And though we will publish six issues per year compared to the previous 10, they will be longer and easier to read, giving us more time to prepare, and you more time to read, each one.

This is more than a facelift. It’s a chance to really show off what the CCPA has to offer in a format that we hope appeals to both current and new readers. We have lofty goals and they are the same as the Monitor’s first editors: to reach new minds and expand popular support for sometimes modest, sometimes radical political and economic alternatives to the flagging neoliberal order.

We couldn’t have gotten to this point without you. The Monitor can only exist because of the generous donations of CCPA supporters. And your guidance will be critical to making it continually better.

Check out the new Monitor online, or make a donation and receive a hard copy by mail.