If the federal government wants to get serious about spending controls, it needs to look critically at its ballooning outsourcing costs. The Shadow Public Service, a new CCPA study, finds that over the past five years, personnel outsourcing costs have risen 79%. While federal departments have had their budgets capped, expenditures on outside consultants have not been touched and remain above $1 billion a year. 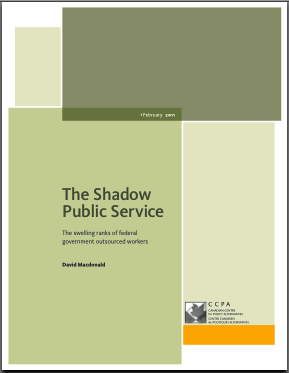 The growing and concentrated nature of outsourcing has created a shadow public service that works alongside the real public service—but without the same hiring practices or transparency requirements. The study makes specific recommendations to help curb rising costs and make better use of the resources the government already has.

Click to read the study in English or in French.