Sshhh. It's an election.

Speech rights are one of our most precious freedoms, and never are they more vital than during an election. Yet in the lead-up to the 2009 provincial election in British Columbia, a significant number of non-profits, charities and other small groups censored their public communication efforts. 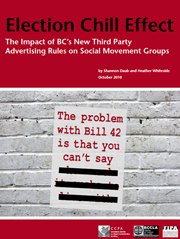 That's the central finding of a new study released today by the CCPA's BC Office, the BC Civil Liberties Association, and BC's Freedom of Information and Privacy Association. The study follows up on controversial "third party election advertising rules" introduced in 2008.

"When the provincial government introduced these new rules, its rationale was to limit election advertising by ‘big spenders’,” says study author Shannon Daub. “But major flaws in the legislation mean that in practice, the rules extensively regulated 'small spenders' and cast a chill on the democratic process."