Our Land is Our Future: What Does Aboriginal Title Mean For Us All? 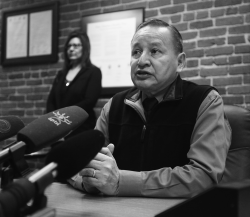 Scroll down to buy tickets

Includes a delicious Indian buffet dinner. There will be a silent auction and raffle packages full of amazing gifts, services, tickets to arts events, getaways and more.

Charles Demers, comedian and regular on CBC Radio’s ‘The Debaters’, will be the emcee for the evening.

In his 16 years as President of the Union of BC Indian Chiefs, and in his many concurrent and previous capacities, Grand Chief Phillip has taken an active role in the defense of Aboriginal Title and Rights, and readily offers his support to Native communities in need.

In October 2006, the Okanagan Nation, led by the Elders of the Penticton Indian Band, acknowledged his lifetime commitment to the defense of Indigenous Peoples' Title and Rights by bestowing on him and his family the rare honour of the title of Grand Chief.

Grand Chief Phillip is well known for his personal approach—seeing first-hand proposed mining sites in the heart of the Sacred Headwaters of the Taku River and Teztan Biny; paddling the Peace River with Elders, leadership and youth of Treaty 8 as they fight the proposed Site C; burning referendum ballots with fellow chiefs in protest; and proudly standing on the steps of the Legislature with 3000 other people united under the Title and Rights Alliance banner.

Most recently, the Grand Chief made waves when he crossed an injunction zone line on Burnaby Mountain. In doing so, he joined over 100 people who were willing to be arrested as part of the protest against Kinder Morgan’s Trans Mountain pipeline expansion project. "As I am being arrested, I will think of our grandchildren," he said.

“The First Nations people of this province have made it abundantly clear that we have every right...to stand by our traditional laws and legal orders, and defend our territories from the threats and predations of oil and gas. And we fully intend to do that.”
— Grand Chief Stewart Phillip, June 2014

Tickets are $90, and you can choose to make an additional donation.
Table reservations are available when 8 tickets are purchased in a single block: $750 for group table or $1500 for patron table.

Thank you for your support. Tax receipts will be issued in early 2016 for a portion of the ticket price and the full amount of any donation.