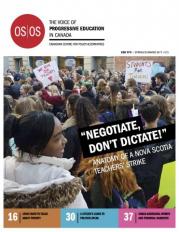 Welcome to the new Our Schools / Our Selves!

Thanks so much for your patience. No doubt you’ve noticed that this is the spring/summer issue, and it breaks the (visual) mold you’ve grown accustomed to. We have launched a major redesign to try and ensure the look of the publication is as accessible and engaging as the contents we publish. Through this process, we will be temporarily moving to double issues for the next few months.

This issue focuses on the teachers’ strike in Nova Scotia — how it began, the way in which it evolved, lessons learned throughout, and next steps after the recent provincial election saw the Liberals return to a majority government (albeit a slim one), as Christine Saulnier discusses in her commentary.

Brian Forbes, a former president of the Nova Scotia Teachers’ Union, has written a detailed historical overview of the collective bargaining process, providing a wealth of information to those curious about how we got to this point. Educators Kerri Veinot, Ben Sichel, and Paul Wozney explore (respectively) the impacts of Bill 75, next steps for a revitalized teacher union, and the need for an engaged citizenry to deconstruct politico-speak (at all levels of government, and certainly not just in his home province of Nova Scotia!). Parent Tina Roberts-Jeffers talks about the intersections between identity, education and power and the movements that gelled in support of public education in the province. Emily Reilly examines the disconnect between the stated priority of Culturally Responsive Pedagogy in the classroom, and the steps being taken (or not) at the political level to support the teachers who are tasked with providing it. Grant Frost puts the frustration of Nova Scotian educators into the broader context of a 25-year international anti-public education campaign waged largely by non-educators. And Larry Haiven looks at the teachers’ strike and the various pieces of provincial legislation as part of a campaign waged against labour unions more generally.

The NSTU has launched a court challenge against Bill 75, and as useful context we’ve included a legal brief that outlines the reasons why the BCTF won their challenge against provincial legislation that limited collective bargaining rights. Fred Harris takes a close look at Ontario curriculum intended to address issues of social justice and asks why the power-based relationship between employee and employer is not included in the discussion. Summer Thorp talks about a remarkable initiative — Nokee Kwe — which uses Photo Voice to help support Aboriginal women develop their own personal narratives. New educator Cheryl Brown’s poem explores her commitment to creating safe, inclusive, engaging classrooms. And educator Liz McAnanama reflects on a lesson plan she put together for her Grade 8 students, using math to talk about poverty in Hamilton, ON.

Again, thanks for your patience as we grow as a publication, and please know how much we appreciate your support throughout this process. As always, we look forward to hearing from you!

Have a great summer!