Just when the world economy appeared to be settling down, Greece -- that cradle of civilization, the birthplace of democracy – exploded with financial and political angst.

The Greek/Eurozone debt crisis continues to send shock waves through the global financial system. It is the new fault line of the 2008 financial crisis – the new contagion that threatens many other nations around the world.

Contagion, a medical term referring to a highly transmittable disease, has become the metaphor for a world of highly interconnected and deregulated financial markets; a situation where a debt crisis in one country can quickly spread to other countries.

Eighteen months ago the G20 economies collectively put together a massive financial bailout to quarantine the contagion, and a $ 5 trillion (U.S.) fiscal spending program. Without that government intervention, the world would have plunged into an even darker economic scenario.

But now that the danger is supposedly past, the  G20 political leaders, despite paying  lip service to the still fragile and uneven state of global economic recovery, are planning to rapidly eliminate their deficits -- the very mistake governments made during the 1930s.

Powerful forces are aligning to flick the world back into its previous ideological default position – a move that is turning real live people into collateral damage. Starting with Greece.

In early May, European governments and the European Central Bank put in place a $1 trillion (U.S.) rescue package in an effort to shut down the speculators and stop the financial contagion from spreading to other countries.

Draconian austerity measures are now being imposed on the Greek people as a condition of “rescue”: severe pension rollbacks and wage cuts for public servants, additional government spending cuts amounting to 10% of GDP.

These measures are guaranteed to deepen and prolong Greece’s recession and paradoxically weaken its ability to manage its debt.

Collateral damage is what happens when contagion hits people who live and work in the real economy, and who pay the price of reining in the financial market excess that caused the contagion.

Many thousands of Greeks are losing their jobs, their homes and their businesses. They are the collateral damage in this recession. They are paying the price of a crisis that was created by banks and corrupt elites, and they are expressing their outrage with general strikes and massive, sometimes violent, street protests.

Yet it’s the banks, not the people, who remain protected. What is happening is an income transfer from the Greek population to mainly foreign banks – a scenario that threatens to play itself out in other indebted nations, reviving fears of another plunge into global recession.

Could Canadians experience another round of collateral damage from the spread of the eurozone debt crisis? It’s possible.

Canadians are not immune to this contagion. Though it appears Canadian financial institutions have little direct exposure to European sovereign debt, the real threat is indirect. The contagion could spread from creditor banks to the global inter-bank markets and, ultimately, to Canadian banks. It could choke off the flow of credit to business and consumers, just like in the fall of 2008.

Our Prime Minister is busy promoting rescues for banks and financial elites while advising other nations to step back from interventions that sustain investment, create jobs and protect real people.

Though Canada’s federal debt is a moderate 35% of GDP (one-fifth of private debt), the Harper government —egged on by the bank economists and its own ideological instincts -- is preparing to shrink its own deficit and debt even as un and underemployment afflict 11.5% of the Canadian work force. 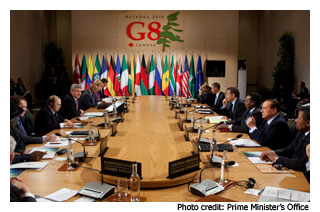 At the Toronto G20 meeting, Harper secured agreement to cut deficits in half by 2013, raising the probability of a backslide into global recession. He also lobbied hard to kill an international bank tax that would help reign in the speculators that put the global economy in crisis in the first place, and provide a major new source of government revenue.

So the poor and the vulnerable will pay the price of deficit reduction via social program cuts and continued high unemployment. They are collateral damage while the perpetrators get back to business as usual

The destructive free market mindset -- the real source of the contagion here – was not extinguished two years ago and proponents such as Harper and other G20 leaders have worked hard to keep it alive.

Clearly, they have not yet learned the lesson of this dramatic market meltdown. Until they do, the cycle of contagion and crisis will recur. And people -- the collateral damage in this dangerous high stakes game -- will continue to pay a heavy price.

Bruce Campbell is the Executive Director of the Canadian Centre for Policy Alternatives.