The Manitoba Federation of Labour (MFL) is holding its annual convention in Brandon October 2 - 4, 2009. There are many important issues to be dealt with however the one issue that should be on the agenda and should be the focus of discussion is the spectre of eroding memberships in trade union organizations, evident in all jurisdictions in Canada.

The following table reflecting Statistics Canada Labour Force Survey data reveals that Manitoba has done relatively well compared to British Columbia and Canada. As a result, we have improved our ranking among provinces from sixth place in 1981, to third place in 2008. 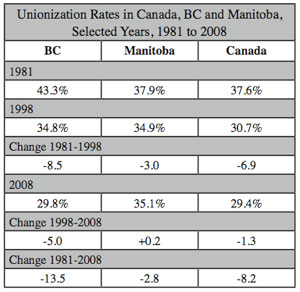 As encouraging as this trend is, it would be a mistake to draw positive conclusions.

A union movement faced with a declining or stagnant unionization rate will lose its power and its capacity to influence government policy. Individual unions and the union movement as a whole must grow to generate the resources needed to service present members, and to finance organizing drives to add new members. Failure to grow will result in eventual decline.

Trends in Manitoba are less pronounced, in part because of the presence of a more labour-friendly (NDP) government. But while the unionization rates in both the public and private sectors are higher in Manitoba (74.9% and 17.5% respectively in 2008), it would be a mistake to conclude from this that all is well. The crucial issue is that union membership rates have to grow, not remain stagnant.

How can these workers be brought into the labour movement? Lots of effort and resources need to be put into creative organizing campaigns. But essential as it is, organizing is not enough.

The most promising approach, as suggested by Roy J. Adams and others, is not what individual unions do in their own organizing campaigns, but rather what all unions do as a collective---the labour movement as a whole. A collective, class-wide approach is what is needed to create possibilities for major breakthroughs in union growth.

Adams suggests that we build mass support around the idea that union rights are human rights, and all workers should have the right to belong to unions, participate in determining their wages and working conditions, and belong to a workplace governed by negotiated collective agreements.

In Manitoba, we need a campaign mobilizing working people to demand amendments to the Labour Relations Act. The Act should allow for automatic certification to workers when 50% plus one have indicated their wish to belong to a union by signing a union card and paying their initiation dues. This legislative change would help to arrest the decline of unionization in Manitoba. It would also project Manitoba labour and the Manitoba government into a leadership role in labour relations in Canada.

There would be opposition to reform of the Labour Relations Act from firms like Wal-Mart, whose version of utopia is right-to-work states like Arkansas. The labour movement and the government would have to stand firm in the face of such opposition.

The leadership for such a campaign will have to come from the MFL and labour councils. These organizations represent the collective interest of all segments of labour. These organizations need to establish a greater presence in the public discourse about the kind of society we want and the institutional changes required to enable us to get there.

If these organizations do not provide this kind of public leadership, we are likely to witness to the continuing demise of organized labour. All Canadians would suffer, because a strong, energetic labour movement is an essential ingredient in the struggle to improve living and working conditions for all of us.