The following editorial will appear in the November issue of the Monitor.

The CCPA's National Office is in downtown Ottawa, about ten blocks from Parliament Hill. On October 22, we were just putting the Monitor to bed, an editorial on the federal government’s anticipated surplus nearly finished, when at about 9:50 a.m. Twitter lit up with news of shots fired and a wounded soldier at the War Memorial. The updates came in fast from journalists, bystanders and several MPs.

According to early reports, there was one confirmed shooter on the loose inside the Centre Block, with possibly two more roaming the city’s business and political core. Two days earlier a man had run over two soldiers in Saint-Jean-sur-Richelieu, Quebec before he was pursued, shot and killed by police. By 9:57 a.m. on October 22 this second, apparently similar assailant was also dead. Though no one knew it at the time, there was no longer a danger to MPs or everyone else in the RCMP-enforced security zone who remained locked inside (or out of) their businesses, homes and cars into the evening. 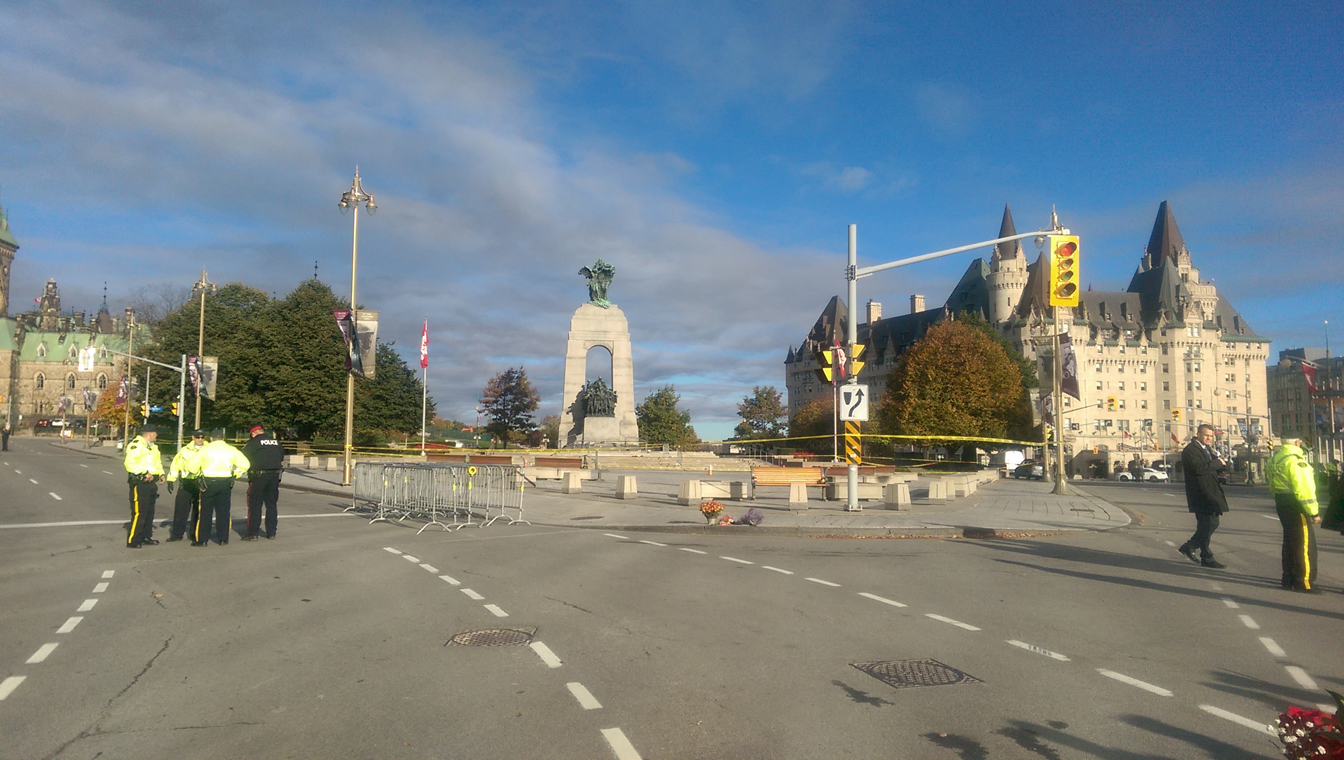 Our offices were locked as well, though we could come and go, and for most of the day it was impossible to think about anything other than the events a few blocks away. A feeling of dread set in and lingers as I write this on the morning after. Talking to friends and colleagues, I know I’m not alone in feeling this way. Possibly you had a similar reaction. The dread had as much to do with what had transpired as what was still to come, notably how the government would respond to what, absent evidence of strong links to terrorism, appeared to be criminal acts by desperate people.

The camaraderie (and hugs) in the House of Commons on October 23 was comforting in its unusualness. But it also masked the reality of a dysfunctional democracy—a perverse system where one party still holds an absolute majority, with plans to use that great power to rush through imposing new security and surveillance measures in an atmosphere where challenging those measures will be increasingly difficult.

According to news of the proposals, the Canadian Security Intelligence Service (CSIS) is to receive a greater international mandate and immunity for agents providing intelligence related to terrorism cases. This will make it even more difficult than it already is to test that intelligence information in court, compromising the rule of law. What we really need is a modicum of public oversight into the existing activities—including surveillance and data collection—of Canada’s spy agencies, which exists in the United States, U.K. and most other self-styled democracies but not in Canada.

The government also announced it wants to introduce new exit controls at the border and airports. Canadian border officials currently share entry data on anyone coming into the country from the United States with the U.S. Department of Homeland Security. Under the government’s new proposal, information on all travellers leaving Canada from any port could be shared to satisfy U.S. demands in the ongoing (and opaque) Beyond the Border negotiations. Precisely this kind of streamlined information sharing was criticized in the 2006 Arar Commission’s final recommendations because of the potential for foreign governments to use it in a way that puts Canadian lives in danger.

Will these measures receive the public scrutiny they need from a Parliament under pressure not to look weak on terrorism?

Even before the attacks, the chance of a full hearing on any government policy proposal was almost nil. As the lone gunman in Parliament was brought down by RCMP officers on October 22, six CF-18 fighter jets were on their way to Kuwait where they will take part in a U.S.-led bombing campaign against Islamic State militants in Iraq. The Harper government took the decision to join the fraught mission, which has been compared to the disastrous 2011 NATO intervention in Libya, despite all three opposition parties voting against it, and polls showing more than half of Canadians favouring a non-military (i.e. humanitarian) role.

From their annual budget omnibus bills to hastily ratified trade agreements to new sex-worker legislation to sensitive oil pipeline approvals, this government refuses to compromise. The opposition is treated like a prop, and dissenting voices outside of Parliament like enemies of the government. Public opinion has occasionally held back some recent government proposals, such as earlier versions of an online spying bill. But these are often short-lived victories, as when warrantless spying powers for police agencies were cynically inserted in anti-bullying legislation despite the warnings of privacy commissioners.

There are questions we should be asking about the attractiveness of groups like Islamic State to young Canadians like Martin Couture-Rouleau and Michael Zehaf-Bibeau, though even here the connections are tenuous and in Zehaf-Bibeau’s case possibly less important than mental illness. It would be completely appropriate to revisit security measures on Parliament Hill and in other government spaces given the ease with which one person was able to enter the Centre Block carrying a rifle. It is essential, however, that we are also able to question the logic, effectiveness and motives behind Canada’s anti-terrorism legislation and military engagements without being accused of weakness, or perhaps of “committing sociology.”

Stuart Trew is the editor of the CCPA Monitor. Send feedback to [email protected].