Trade Agreements Like NAFTA Are a Menace to Democracy 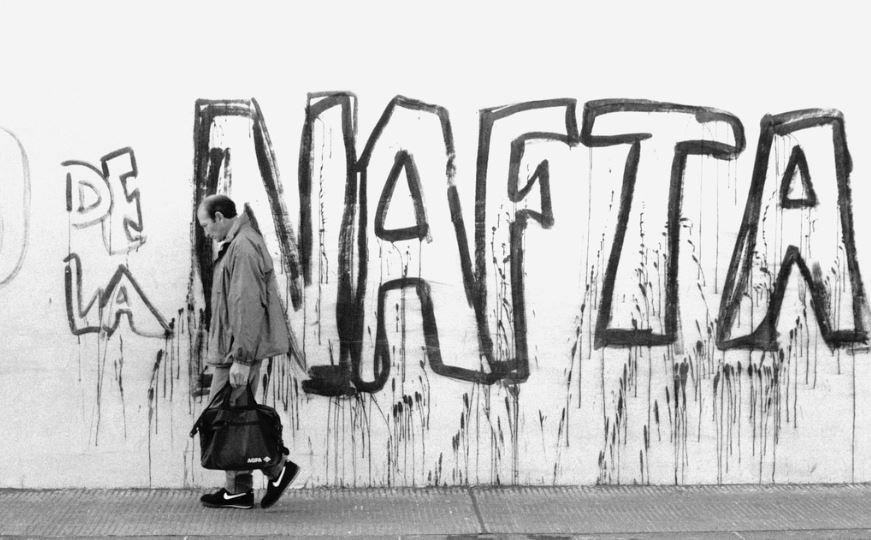 On his first day in office, US president Joe Biden revoked the permit for the controversial Keystone XL (KXL) pipeline. The partially built project was supposed to carry bitumen from the Alberta tar sands to Gulf Coast refineries in the United States. Green-lighted by Donald Trump in 2017, but delayed in the courts for years, this climate-busting project is now thankfully dead.

While the pipeline will not be built, the company behind it will almost certainly pursue hefty compensation from Washington, with the Alberta government at its side. To do this, they will sidestep the regular court system and appeal to the North American Free Trade Agreement’s (NAFTA) decommissioned investor-state dispute settlement (ISDS) mechanism.

These clauses may seem technical, and they’ve long been hidden away from proper democratic scrutiny. But they give companies the power to sue elected governments for making decisions in the interests of their citizens. The Keystone XL case should be the catalyst for a fightback against the threat ISDS clauses pose to democracy.

TC Energy started an ISDS case against the United States in 2015, seeking over US$15 billion in compensation for the Obama administration’s earlier cancellation of KXL. The company dropped that challenge after Trump reversed Barack Obama’s decision in 2017.

The project’s investors now include the province of Alberta, which foolishly sunk C$1.5 billion of public money into the failing project, along with a further C$4.5 billion in loan guarantees. Alberta premier Jason Kenney has said that Biden’s cancellation represents “a clear violation of the investor protection provisions in the North American Free Trade Agreement.”

An ISDS tribunal cannot force the United States to reverse its decision, but it does have the power to order compensation for the investors. This fine — or award — can cover not only the investor’s expenditures, but also its expected future profits.

The United States has been challenged twenty-two times under NAFTA Chapter 11 to date but has never lost a case. However, all winning streaks come to an end. If the United States were to lose a KXL case (a strong possibility), it could result in the largest fine in NAFTA’s history.

Property Rights for the Few, Property Theft for the Many

Investment arbitration has been a feature of bilateral investment treaties between developed and developing countries since the late 1950s. But NAFTA was the first regional free-trade agreement to include an ISDS clause. The idea was so new that few in or outside of government knew what to make of the chapter, or why they should oppose it.

The obscurity of NAFTA’s ISDS system was short-lived. In 1996, Ethyl Corporation, the US company responsible for leaded gasoline, launched the first NAFTA claim against Canada. Ethyl objected to a Canadian ban on the import and interprovincial trade of MMT, the manganese-based gasoline additive that is a suspected neurotoxin.

In 1998, after preliminary tribunal judgments against it, the Canadian government settled. It paid Ethyl US$13 million, repealed the MMT ban, and, absurdly, even apologized to the company. Suddenly, NAFTA Chapter 11 had the attention of policymakers and the public.

Perhaps the most egregious early NAFTA ruling was against Mexico. Metalclad, a US waste management company, contended that it had been treated unfairly after a local government refused it a permit to construct and operate a hazardous waste treatment facility and landfill. Federal permits related to the project were subsequently issued and construction proceeded, even in the face of a municipal “stop work” order.

Ultimately, the state government intervened to create an ecological preserve in the area where the facility was to be located, effectively ending the project. The investor successfully argued that these measures were “tantamount to expropriation.” Mexico was ordered to pay US$16.7 million in compensation plus interest, a huge sum of money for the state and local governments who ultimately bore the cost.

Through NAFTA’s ISDS system, assertive trade lawyers had achieved what property rights zealots could not manage through the domestic courts — namely, an extreme definition of “regulatory takings.” That is the idea that government regulation can limit property rights to the degree that it constitutes expropriation.

NAFTA chapter 11 also allowed for an absurdly broad interpretation of the “minimum standards of treatment” owed to investors under customary international law — something that had previously been confined to abuses like imprisonment without trial.

With these early wins for investors, the path was clear for the lawsuits to roll. Nearly half of NAFTA ISDS claims have targeted Canada. To date, Canada has lost or settled ten of forty-three NAFTA lawsuits, paying out C$260 million in compensation to investors and spending a further C$113 million on legal fees. More than half of these claims involve challenges to environmental protection or natural resource management policies.

A NAFTA tribunal, for example, condemned the results of an environmental assessment of a Nova Scotia quarry because the assessors dared to consider “community values.” In a long-running case, Canada is fighting a C$250 million NAFTA lawsuit because the province of Quebec banned fracking in the St. Lawrence River valley.

Mexico has been sued twenty-three times and been obliged to pay out more than US$205 million in damages. Over the last few years, the country has faced an accelerating number of claims, with investors seeking hundreds of millions in damages. US investors are threatening even more NAFTA disputes if AMLO’s government proceeds with planned reforms to expand state participation in the energy sector.

The most insidious effect of NAFTA, however, was its impact on global arbitrations, which skyrocketed after investors started winning NAFTA cases. When NAFTA was signed, there had been only a handful of treaty-based arbitrations globally. By 2020, arbitrations had ballooned globally to 1,061 known cases, many of them dealing with challenges to nondiscriminatory public interest regulation.

In a rare trade policy setback for the corporate lobby, ISDS was stripped out of the renegotiated NAFTA, at least when it came to relations between Canada and the United States (a scaled-back version survives between the US and Mexico). The US Trade Representative Robert Lighthizer, the Canadian government, and representatives of organized labor all saw this as a victory.

When Chrystia Freeland, then Canada’s foreign affairs minister, announced a new deal had been reached with the United States and Mexico to replace NAFTA, she emphasized the end of ISDS, claiming that, "in removing it, we have strengthened our government’s right to regulate in the public interest to protect public health and the environment."

However, the USMCA allows investor-state claims under the old NAFTA rules to continue for three more years. These claims must involve investments made before July 1, 2020 and challenge additional government measures affecting those investments taken at any time until July 2023.

Canada was hit with its first legacy claim last year. Koch Industries is suing over Ontario’s exit from a cap-and-trade emissions trading program that also involves Quebec and California. A Koch subsidiary reportedly purchased US$30 million in emission allowances under this program, but the Ontario government denied the company compensation.

Whatever one’s views are on the merits of cap-and-trade, this is a bizarre situation. The Koch family has done more than almost anyone to sow doubt about climate change and create a polarized environment where right-wing governments can irresponsibly trash established climate programs. Now they stand to profit when exactly that scenario plays out.

This is the kind of rigged system fostered by investment treaties and ISDS. Companies can place risky bets on politically contested projects, knowing that even if they fail, the investors have a good chance to recover their costs — and then some — through an investor­-state claim.

The Future of ISDS

Since Freeland uttered her words of caution about investment arbitration in NAFTA, the Trudeau government has continued to negotiate ISDS provisions into a free trade deal with Mercosur. It has also warmly endorsed the UK’s entry into the CPTPP, with its “modernized” version of the NAFTA investment chapter and ISDS system.

Lighthizer, on the other hand, took the USMCA decision to heart, avoiding ISDS provisions in Trump-era trade deals, and signing no new standalone bilateral investment treaties. It remains to be seen whether this policy will stick under the new Democratic administration.

ISDS still has many backers in the corporate wing of the Democratic Party. But in response to pressure from unions, the Biden campaign pledged last year to oppose ISDS in new trade deals, and much of the party base and many members of its Congressional caucus are opposed. This opposition will be difficult to dampen. A KXL dispute, should the Alberta government and TC Energy move forward, will stiffen the resolve of activists, and hopefully provoke Biden’s trade officials to draw a line, too.

It won’t be easy to unravel the hundreds of investment treaties containing ISDS. But it is a worthwhile fight that can be won. In Europe, there is fury over lawsuits from investors demanding massive compensation for the phasing out of fossil fuels. In the global South, dozens of countries have been trying to extricate themselves from investment treaties.

US sponsorship was pivotal to the proliferation of ISDS. Just as the early NAFTA cases turbocharged ISDS, its undoing might send the process into reverse, satisfying a demand that global trade justice activists have been making for over two decades.

Scott Sinclair is the founding director of the Canadian Centre for Policy Alternative’s Trade and Investment Research Project. This article first appeared in Jacobin on March 4.