"The Elf on the Shelf" and the normalization of surveillance
Author(s):
Laura Pinto
Selena Nemorin
December 1, 2014 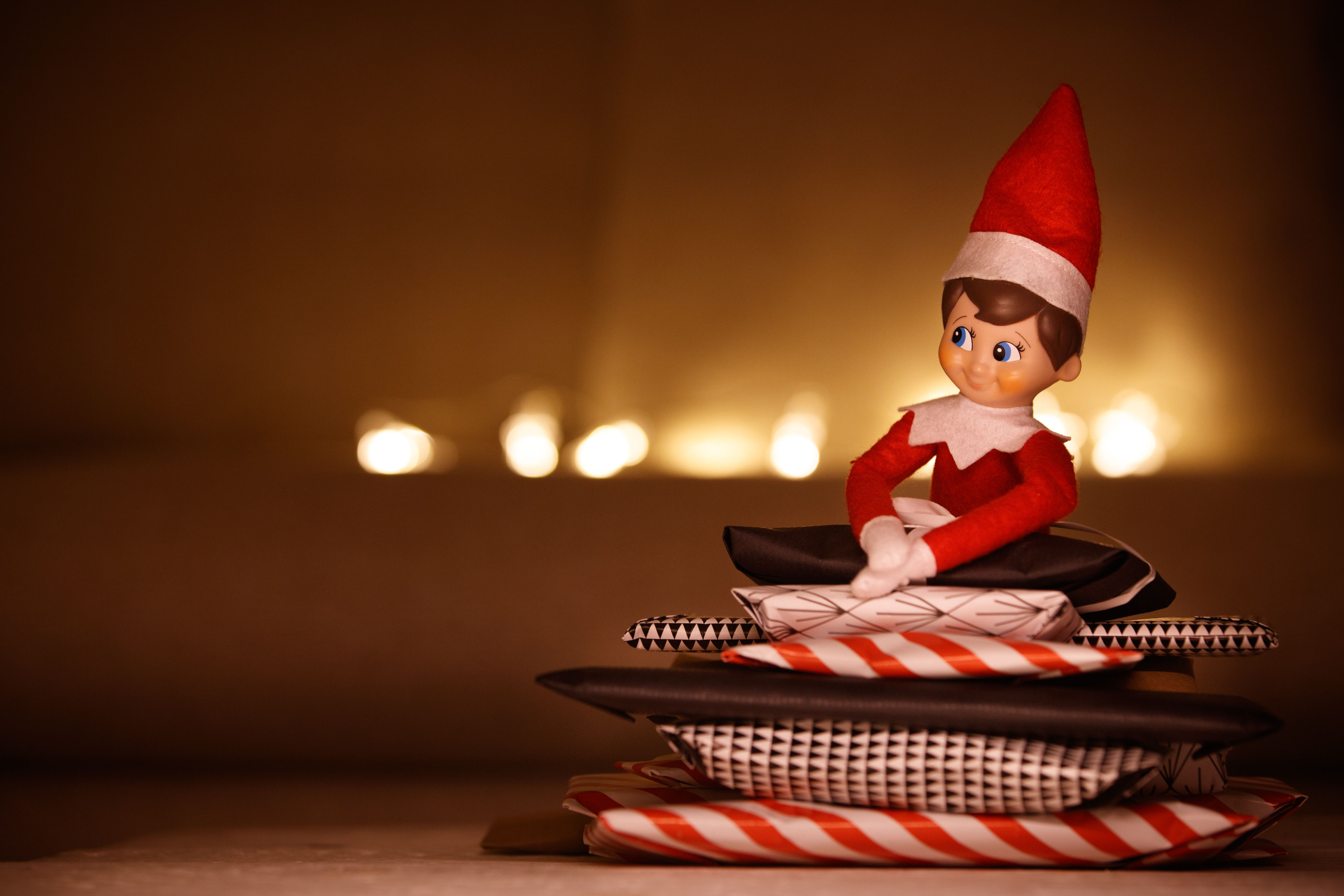 The Elf on the Shelf ® is a special scout elf sent from the North Pole to help Santa Claus manage his naughty and nice lists. When a family adopts an elf and gives it a name, the elf receives its Christmas magic and can fly to the North Pole each night to tell Santa Claus about all of the day's adventures. Each morning, the elf returns to its family and perches in a different place to watch the fun.

After several years of observing parents and teachers sharing photos of Elf on the Shelf dolls in various (sometimes compromising!) poses on social media, our curiosity led us to critically examine this cultural phenomenon.

The Elf on the Shelf is a wildly popular, Christmas-themed book that comes with a doll to reinforce the story in home and school settings. The purpose of this article is to explore theoretical and conceptual concerns about the popularity and widespread educational use of The Elf on the Shelf in light of the contemporary literature on play and panoptic surveillance.

Based on a family Christmas tradition in their home, retired teacher Carol Aebersold and her daughter Chanda Bell self-published an illustrated children’s book called The Elf on the Shelf in 2005 and distributed it in the U.S. By 2013, they sold over 6 million copies of their book, packaged with an elf doll. Evidence of its mark as an icon of North American culture includes a float in the 2013 Macy’s Thanksgiving parade, coverage on NBC’s Today show, and a television special on CBS, two Elf-themed Saturday Night Live sketches in 2012 and 2013, and being named one of Amazon’s top 10 toys of 2012.

The illustrated book enclosed with each Elf on the Shelf doll explains that elves are assigned to homes (or sometimes classrooms) with the explicit charge of observing children's actions all day on behalf of Santa Claus, who is referred to as “the boss”. These industrious elves perched high on shelves are managers of Santa’s “naughty” and “nice” lists with a central aim of ensuring that the children who have adopted them remain on the “nice” list. As the story goes, at night the elves step away from their shelves to return to the North Pole so they can report their observations to Santa Claus. According to The Elf on the Shelf website, there are two basic rules that children must know about having an elf:

First, an elf cannot be touched; Christmas magic is very fragile and if an elf is touched it may lose that magic and be unable to fly back to the North Pole. Second, an elf cannot speak or move while anyone in the house is awake! An elf's job is to watch and listen.

Elf on the Shelf teacher resources are designed with American curriculum standards in mind. The website encourages teachers to register for The Elf on the Shelf® “Teacher Resource Center” for free kindergarten to grade 5 lesson plans and classroom resources that support the Common Core State Standards which teachers in most of the 50 states are required to follow.

The immense impact of play in how children make sense of their world, their place in society, and their identity, and what is right and wrong has been well-documented. Play comes in a variety of forms and involves many different types of activities; children may role-play and interact with other people, or they may interact with things (toys or other objects), or a combination of both. In the course of play, children practice all sorts of social and cognitive activities, such as exercising self-control, testing and developing what they already know, cooperating and socializing, symbolizing and/or using objects in ways that are meaningful and exciting to them.

When children enter the play world of The Elf on the Shelf, they accept a series of practices and rules associated with the larger story. This, of course, is not unique to The Elf on the Shelf. Many children’s games, including board games and video games, require children to participate while following a prescribed set of rules. The difference, however, is that in other games, the child role-plays a character, or the child imagines herself within a play-world of the game, but the role play does not enter the child’s real world as part of the game. As well, in most games, the time of play is delineated (while the game goes on), and the play to which the rules apply typically does not overlap with the child’s real world.

Elf on the Shelf presents a unique (and prescriptive) form of play that blurs the distinction between play time and real life. Children who participate in play with The Elf on the Shelf doll have to contend with rules at all times during the day: they may not touch the doll, and they must accept that the doll watches them at all times with the purpose of reporting to Santa Claus. This is different from more conventional play with dolls, where children create play-worlds born of their imagination, moving dolls and determining interactions with other people and other dolls. Rather, the hands-off “play” demanded by the elf is limited to finding (but not touching!) The Elf on the Shelf every morning, and acquiescing to surveillance during waking hours under the elf’s watchful eye. The Elf on the Shelf controls all parameters of play, who can do and touch what, and ultimately attempts to dictate the child’s behavior outside of time used for play.

The gaze of the elf on the child’s real world (as opposed to play world) resonates with the purpose of the panopticon, based on Jeremy Bentham’s 18th century design for a model prison (a central tower in a circular structure, surrounded by cells). Backlighting in the central tower made it impossible for prisoners to discern whether or not they were being watched. Michel Foucault (1979) saw the panopticon as a perfect symbol of modern surveillance societies: a metaphor for discipline operating through a variety of social and institutional apparatuses that leave the individual on guard, never certain if she is actually being watched, but knowing structures are in place to monitor her movements at all times.

This was illustrated by Huffington Post writer Wendy Bradford who reported that her children insist on ringing the doorbell before entering their home to make sure that their Elf on the Shelf doll, “Chippey,” is prepared for their arrival, thus underscoring their awareness (and acceptance) of the surveillance apparatus. Lewis reminisced about the “good old days” in a tongue-in cheek blog about The Elf on the Shelf phenomenon while simultaneously reinforcing the surveillance functions of the toy:

I long for the days when Santa's helpers were mystical, magical, mysterious and unseen little people and not some overpriced brand. But, the times they are a-changing. If I must participate in this new "tradition," I choose to let the elf serve its purpose -- to set on a shelf and encourage my children to be "nice”… Parents need all the help they can get. Let your elf help you.

Under normal circumstances, children's behaviour (i.e., what is "naughty" and what is "nice") is situated in social contexts and mediated by human beings (peers, parents, and teachers) where the child conceptualizes actions and emotions in relation to other people and how they feel.

Through play, children become aware about others’ perspectives: in other words, they cultivate understandings about social relationships. The Elf on the Shelf essentially teaches the child to accept an external form of non-familial surveillance in the home when the elf becomes the source of power and judgment, based on a set of rules attributable to Santa Claus. Children potentially cater to The Elf on the Shelf as the “other,” rather than engaging in and honing understandings of social relationships with peers, parents, teachers and “real life” others.

What is troubling is what The Elf on the Shelf represents and normalizes: anecdotal evidence reveals that children perform an identity that is not only for caretakers, but for an external authority (The Elf on the Shelf), similar to the dynamic between citizen and authority in the context of the surveillance state. Further to this, The Elf on the Shelf website offers teacher resources, integrating into both home and school not only the brand but also tacit acceptance of being monitored and always being on one’s best behaviour--without question.

By inviting The Elf on the Shelf simultaneously into their play-world and real lives, children are taught to accept or even seek out external observation of their actions outside of their caregivers and familial structures. Broadly speaking, The Elf on the Shelf serves functions that are aligned to the official functions of the panopticon. In doing so, it contributes to the shaping of children as governable subjects.

While the elf may be part of a pre-Christmas game and might help manage children’s behaviors in the weeks leading up to the holiday, it also sets children up for dangerous, uncritical acceptance of power structures. Certainly, teachers and parents can incorporate critical pedagogies alongside the elf’s presence in children’s play worlds and social lives in “teachable moments” that cultivate children’s ability to identify, question, and resist power. How do children conceptualize being watched; do they perceive themselves to be engaging in performance, or is performativity a natural response to the elf’s presence.

Although The Elf on the Shelf has received positive media attention and has been embraced by millions of parents and teachers, it nevertheless represents something disturbing and raises an important question. When parents and teachers bring The Elf on the Shelf into homes and classrooms, are they preparing a generation of children to accept, not question, increasingly intrusive (albeit whimsically packaged) modes of surveillance?

Dr. Laura Elizabeth Pinto is an assistant professor at the University of Ontario Institute of Technology (UOIT). She has been recognized with a Canadian Governor General’s Gold Medal, the University of Windsor Odyssey Award, and the Ontario Business Educators’ Hillmer Award. She has authored and coauthored 11 books, and was shortlisted for a Speaker’s Book Award from the Ontario Legislature for Curriculum Reform in Ontario (University of Toronto Press, 2012). She invites you to view her video that inspired this article, Elf et Michelf.

Dr. Selena Nemorin is a post-doctoral fellow at Monash University in Melbourne, Australia. Her research interests include critical-democratic education, surveillance and ethics, educational technology, and philosophy of technology. She has written about propaganda and dissent in a global media environment for Oxford University Press.

Foucault, M. (1979). Discipline and punish: The birth of the prison. England: Penguin.