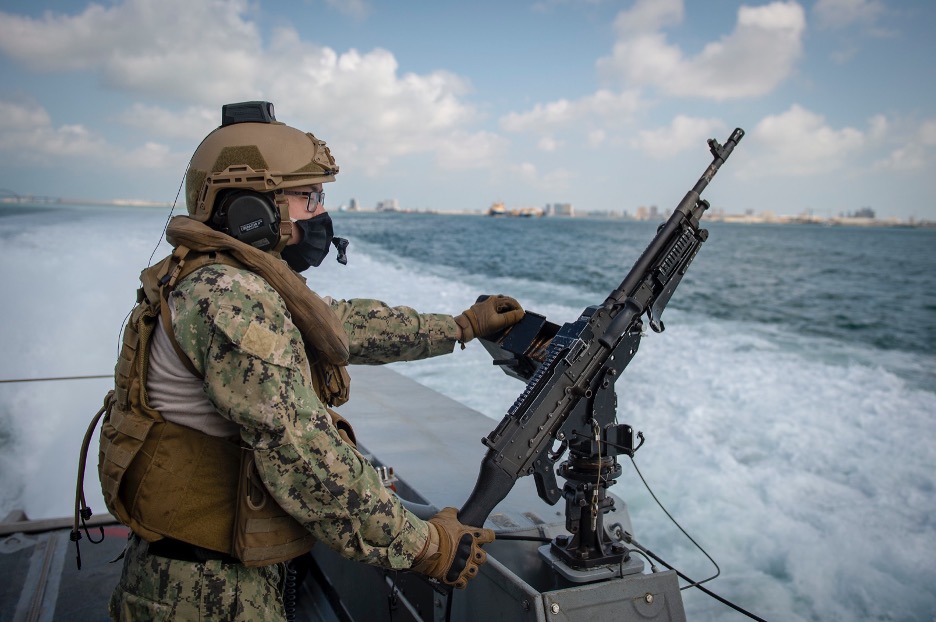 A U.S. sailor stands watch on a Mark VI patrol boat before a weapons sustainment exercise in the Arabian Gulf, April 16, 2020 (U.S. Navy)

Just 12 years ago, oil exceeded US$100 per barrel. In April this year, prices crashed below zero for the first time ever. How could that happen? The shutting down of economies during the coronavirus pandemic provides a partial answer, but the story is more complex. It involves miscalculations in both the U.S. and Canada.

During the past 10 years, North American oil output doubled, essentially because of fracking in the U.S. and expanding oil sands extraction in Canada. The production tsunami created a bonanza for North America but also flooded the world oil market, leading to the earlier price collapse in 2014-15.

The U.S. and Canada continued expanding production, expecting Saudi Arabia and other countries to cut back. To some extent, this happened. In late 2016, 24 oil-producing countries hammered out a historic accord to alleviate the world oil glut. They agreed to cut output by about 1.2 million barrels per day for six months.

These countries subsequently extended cuts through March 2020. Signatories included not only the 13 member countries of the Organization of the Petroleum Exporting Countries (OPEC), but also 11 others led by Russia (the OPEC+ group). Oil prices improved substantially. The U.S. and Canada, who were not among the signatories, freeloaded off the agreement by continuing to increase production.

This March, the OPEC+ group faced a crisis. How far was it willing to cut production again to underpin the world oil market? Demand was falling with the pandemic, yet North American production continued to expand. Russia was willing to extend existing cuts; Saudi Arabia wanted to increase them. The meeting ended without consensus. The next day, Saudi Arabia slashed its prices and opened up the spigots. World oil prices fell to record lows.

Some observers perceived a strategy—concerted or not—to derail the U.S. fracking industry. The Kremlin refuted the idea, telling reporters, “there are no price wars between Russia and Saudi Arabia.... We know the huge U.S. oil sector is now in distress because of these prices. There is a serious crisis, we also understand this.”

With alarm bells ringing, Trump phoned Putin on March 30. According to the Kremlin readout, the two leaders agreed to hold Russo-American consultations through their ministers of energy. Trump told Fox News, “We don’t want to have a dead industry that’s wiped out... It’s bad for everybody. This is a fight between Saudi Arabia and Russia.” Alberta Premier Jason Kenney commented, “OPEC+ started this fire and they have to put it out. We're not going to surrender our industry and we're prepared to go the distance.”

OPEC+ countries took action on April 9, announcing huge cuts of almost 10 million barrels per day from May to June, eight million b/d from July to December, and six million b/d from January 2021 to April 2022. They called on major producers worldwide to help stabilize the market.

The next day, Saudi Arabia hosted a virtual meeting of G20 countries. The final communiqué said blandly, “We commit to take all the necessary and immediate measures to ensure energy market stability.” Neither Ottawa nor Washington promised specific cuts at the meeting.

The OPEC+ cuts were far less than the anticipated 20-million-b/d or more drop in global demand. With the oil glut, storage installations became full and the bottom fell out of the market.

On April 20, the U.S. benchmark West Texas Intermediate price for May deliveries crashed below zero for the first time ever. Suppliers were paying customers to take oil off their hands. In subsequent days, the U.S. price hovered around US$10–15 per barrel. The oilsands price, Western Canadian Select, floated around US$0–5 per barrel. Subsequently, both benchmark prices improved but remained below production costs.

In early June, OPEC+ countries extended the May-June production cuts an additional month and the WTI benchmark approached US$40 per barrel. Whether this will tempt some U.S. or Canadian producers to reopen shut-in operations is too early to know.

The price collapse was calamitous for both fracking and oilsands operations. They are both high cost operations, initiated when prices exceeded US$100 per barrel. The prevailing wisdom then was that production had peaked and scarcity loomed. During the 2020 price collapse, companies were unable to cover operating costs, let alone capital overhead. U.S. oil and gas producers closed wells, suspended drilling and axed new projects. With a glut of both oil and gas, numerous producers faced bankruptcy.

Should the U.S. and Canada shore up an industry whose future is questionable? What about the banks saddled with bad loans?

Relatively speaking, Russia and Saudi Arabia are sitting pretty. Russia’s finance ministry revised its 2020 budget to reflect a US$20 oil price. While Russia needs a breakeven price of about US$40 per barrel to balance its budget, it has “enough resources to cushion the blow,” according to the Kremlin. To cover the shortfall, Russia can use its National Wealth Fund accumulated from oil revenues. Besides, Russian oil is very cheap to produce. Its largest oil producer, Rosneft, enjoys operating costs of about US$2.50 per barrel (about $3.50/barrel in Canadian dollars).

Saudi Arabia is a petro-state par excellence. It too has huge foreign exchange reserves to help weather the oil price collapse. While it needs a breakeven price of about US$85 per barrel to balance its budget, it can meet the shortfall by borrowing, cutting non-essential projects and financing from its Public Investment Fund. However, austerity has also come into play. To further shore up government finances, the Saudi Finance Minister announced in May he would be raising the value-added tax from 5% to 15% and cancelling a cost-of-living allowance for state workers worth about $375 a month. Its national oil company, Saudi Aramco, has operating costs in the US$2.50–2.80 range.

In addition, Western sanctions hammer Venezuela, a country with the world's largest oil reserves. As a result of sanctions, Venezuelan oil exports have tanked. Canada cheerleads the clamour for regime change, alleging Venezuela's democracy deficit. Unable to import Venezuelan heavy crude, U.S. refineries switched to using more oilsands bitumen. Numerous U.S. refineries have invested in the expensive units that can upgrade bitumen. Outside the U.S. and Alberta, such refineries are rare.

While Iraq’s oil exports have recovered, those of Iran, Syria and Venezuela remain disrupted. Washington continues implacable pressure for regime change despite the pandemic. By disrupting their oil exports, sanctions help both U.S. fracking companies and Canadian producers. Ottawa is complicit in support of Washington. Western sanctions are not endorsed by the United Nations.

Washington has applied its sanctions against trading with Iran worldwide. Further, U.S. sanctions against European companies have delayed completion of Nord Stream 2, a joint venture gas pipeline from Russia to Germany. The U.S. wants to reduce Russian gas supplies to Europe and substitute its own higher priced gas. What’s going on is economic warfare.

Black swans—rare and unpredictable events that seem obvious only in hindsight—lurk everywhere. The future of oil globally and in Canada remains uncertain. After the pandemic, will world demand resume its previous trajectory? How far will prices recover?

Analysts question whether consumption will return to pre-pandemic levels quickly, or at all. Is a support package for the oil industry a panacea? It may provide life support, but long-term prospects remain problematic for oilsands and fracking alike.

The reality is oil can be produced much more cheaply outside North America. War and sanctions fail to offer long-term solutions to oversupply. Meanwhile, global warming is hatching new black swans every year. Miscalculations in both the oil industry and governments will be costly for all.