Corporate income tax has long been a leading provider of government revenue. Unfortunately, large sections of the media and policy-making community have accepted the notion, propagated by both the business lobby and neoliberal ideology, that corporate tax is a detrimental, inefficient and growth inhibiting tax. Tax cuts, on the other hand, are said to encourage investment, create jobs and increase productivity. There is strong evidence that neither of these widely held beliefs are true.

We need look no further than south of the border for the latest example of corporate tax cuts failing to match promises. President Trump’s Tax Cuts and Jobs Act of 2017, which lowered the corporate tax rate from 35% to 21%, did not lead to any increase in growth, investment or wages, according to a Congressional Research Service paper published in May. These findings were echoed in a more recent study by the IMF. The only benefit from the cuts was a brief upturn in repatriated corporate money from abroad, which quickly levelled off as companies dumped their proceeds into share buy-backs and dividends.

Despite this considerable policy failure, we still hear calls for renewed corporate tax cuts in Canada. The Alberta government, for example, has announced it is lowering the provincial corporate tax rate by one-third, claiming this will increase competitiveness and spur investment. It almost certainly will not. Between 2000 and 2006, the Chrétien and Martin governments cut the corporate rate from 28% to 21%; by 2012, the Harper government had taken it down to 15%.

This halving of corporate taxes in just 12 years contributed substantially to the profits of large firms, but the public benefits are hard to find.According to Statistics Canada, after-tax corporate profits have more than doubled since 2000 (from $122 to $303 billion) while total federal corporate tax revenue increased by $33 billion (from $50 to $83 billion). Canada’s economy (measured by GDP) doubled in size over this period, from $1.13 to $2.22 trillion, yet corporations are contributing a declining share of this amount to the federal treasury.

Even small changes in corporate tax rates have sizeable ramifications, as every one percentage point cut has been estimated to cost the federal government roughly $2 billion in annual revenue. This lost revenue has substantially undermined public spending. But corporate tax cuts have also been shown to actually foster slower growth in Canada. Worse yet, rather than investing their enlarged earnings into expansionary industrial projects, Canada’s corporate sector has hoarded an idle cash pile of $680 billion, which nearly matches the federal debt size.

As mentioned, the corporate profits that are not hoarded have mostly been spent on share buy-backs and dividends. As shown in the chart, dividend spending has quadrupled since the turn of the century as the tax rate dropped, while investment in machinery and equipment has barely budged. 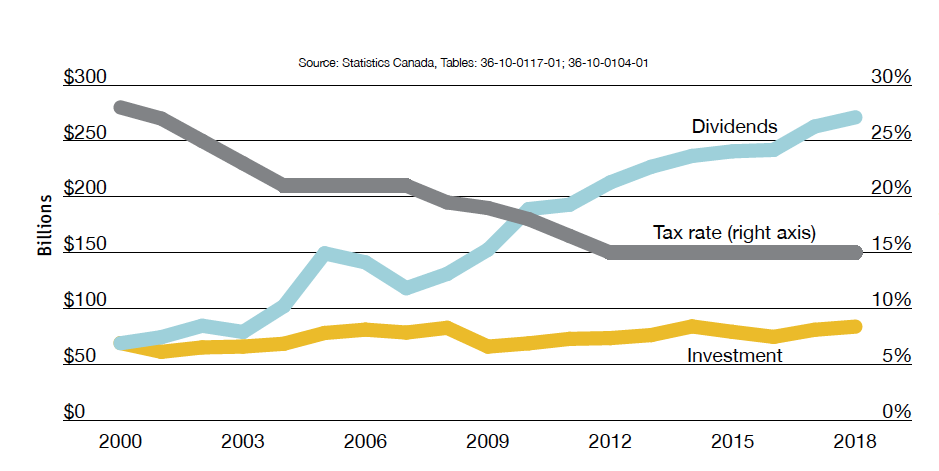 Canada already has the lowest effective corporate tax rate (which includes tax incentives) among the world's leading economies, but it hasn't led to any increased rates of business investment. Canadians should be questioning why we are trying to win a global race to the bottom that simply helps more wealthy shareholders avoid paying tax.

Low corporate tax rates contribute to soaring inequality that has also proven to be harmful for economic growth. Moreover, the long-term well-being of Canada is being put at risk, since corporate profits depend on tax-financed public goods such as an educated and healthy workforce and a strong infrastructure. Cutting already low taxes for corporations does not lead them to invest more or contribute their fair share, but it does undermine everyone else.

Matt Polacko is a Progressive Economics Fellow with the CCPA’s national office and a doctoral candidate in Politics at Royal Holloway, University of London.