A federal discussion on the future of agriculture could determine how much Ontario food makes it onto provincial shelves and dinner tables.
Author(s):
Emery Huszka
May 1, 2018 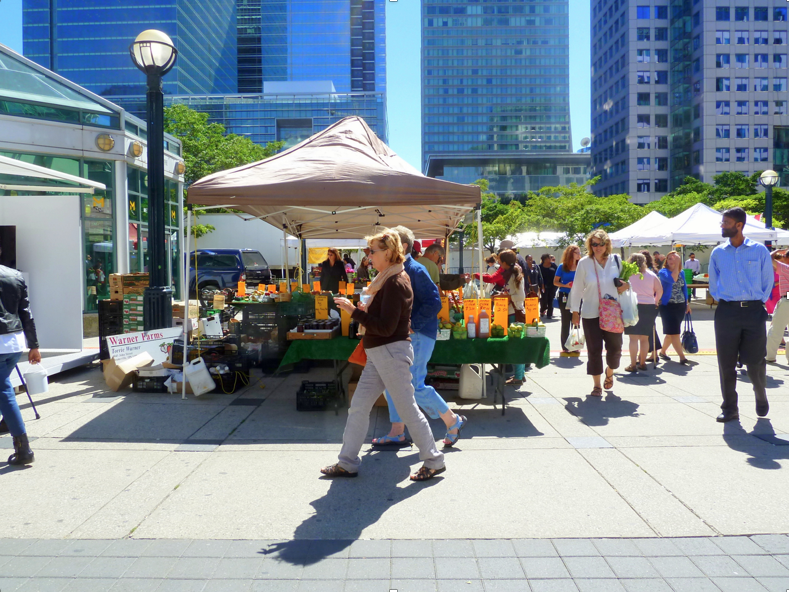 Canada is finally discussing a national food policy, but what does that really mean for eaters and the farmers who grow our food in Ontario and across this country? It’s a question we should be putting to our elected representatives, and those hoping to join their ranks, at all levels of government.

At its core, a national food policy must consider how Canadians will feed themselves, now and in the future. But while it’s positive this important conversation has been opened up in Ottawa, the federal government and large agricultural players are still pushing an old refrain: economic gains through an export-first food policy.

That message was transmitted yet again in a recent report from Finance Minister Bill Morneau’s Advisory Council on Economic Growth. The Barton Report (the advisory council is headed by McKinsey & Company management consultant Dominic Barton) wants Canada to focus on increasing processor capacity to facilitate the export of agricultural products.

“Enabling the sector to move up to 2nd place in agriculture and to 5th place in agfood would imply an additional US$30 billion in exports in today’s distribution of global export shares, equivalent to nearly 2 per cent of current GDP,” the council wrote in February. Canada is currently the 5th largest agricultural exporter and 11th largest food exporter.

Unfortunately, while farmers do need strong processing partners, focusing on export capacity will not feed Canadians. Ontario farmers would be better served by a bigger-picture strategy that considers domestic as well as export opportunities, the financial burdens on farmers and the environmental impacts of large-scale farming.

The National Farmers Union believes that access to healthy local food is a right. Provincially certified abattoirs, direct marketing opportunities and support for smaller-scale farming operations will be more productive and sustainable in the long term than export-led growth.

The results of a narrow policy of export promotion and government support for export-sized operations, to the exclusion of farmers focused on the domestic eater, are plain to see: family farm ownership is replaced with non-farm ownership and control; farmland is reduced to a commodity to be mined instead of a living system to be fed and nurtured; farm owners become indentured employees to national and multinational corporations; local high-quality food becomes less important than durable food for processing; control of Canadian food is consolidated within the processing and retailing sectors; and gross margins on farms escalate while net margins evaporate.

On top of its environmental benefits, moving the agricultural policy target from exports to localization will engage more people in food production and encourage economic growth within the rural communities where farmers live and work. Food exports are important, but they ought to occur because of genuine consumer need abroad, not because of artificially inflated domestic supply.

Statistics Canada has recorded a consistent annual drop in the number of farm operations in this country. In addition to the trend of operations growing larger and swallowing up smaller farms, investment funds and foreign governments have become powerful buyers of farmland globally, removing ownership and control from the farmers working the land and increasing the cost of farmland to a point where it cannot be recouped.

While governments in Ontario and B.C. have taken steps to regulate foreign ownership in urban centres, there hasn’t been the same action for farmland, as detailed in the NFU report Losing Our Grip. Public policy can and should prioritize small-scale ownership and efficiency per acre over large-scale bargaining power.

As a society, we also need to acknowledge that while food production is a business, food itself, like the air we breathe and water we drink, is a basic necessity whose protection and management should not be left alone to capitalist markets. Without careful public oversight and public interest reforms, we risk losing control of our food systems to monopolist corporations.

The potential for structural failure was brought home to Canadians recently when two large-scale businesses, food processor Weston Foods and retailer Loblaws, admitted they had been fixing the price of bread for more than 14 years. Our governments’ poor oversight did not go unnoticed by consumers, who were offered a piddling $25 Loblaws gift card as compensation.

Consumers showed their own power to change the food system when, years earlier, they forced Loblaws to reverse a corporate decision to remove Canadian-made French’s ketchup from store shelves. Clearly, consumers wanted to purchase Canadian-grown food. We should be doing more to make sure family farms have the land, distribution systems, buy-local labelling regimes and other support they need to make that happen.

Food production methods must be tied to ecological activities such as carbon sequestration in soil. An appropriately sized farm operates on a closed loop where nutrients that are used in growing the food are fed back through animal manure or cover crops. Farmers also maintain and nurture grasslands, woodlots, wetlands and other natural areas in the public interest, providing environmental goods and services in the process while covering the costs out of their own profits.

The stewardship and conservation role played by farmers could be greatly expanded and enhanced with more public support. Underfunded protection plans are futile in the face of land values rising beyond their productive capacity and an increasingly industrialized, export-driven machine for food production. Bigger farms are not the enemy, but allowing smaller more environmentally responsive family operations to become extinct is an absolute shame on our part.

Canadian trade negotiations always put foreign market access for agricultural exports in the spotlight. Market access for local farmers here at home is just as important—a fact brought home again by the NAFTA renegotiations. In those talks, the Trump administration is coming hard after Canada’s supply-managed agricultural sectors when we should be holding them up as examples of sustainable, equitable food models to be emulated here and abroad.

Canada’s dairy, egg and chicken farmers are protected by high tariffs for a reason: these farmers produce almost exclusively for the Canadian market and create a reliable, steady supply of high quality food in the process. Farmers in supply-managed sectors are also guaranteed a fair and sustainable price for their labour, and consumers are guaranteed a stable price at the grocery store. The Ontario government and Canadian NAFTA negotiators need to make it clear this system is off limits in any new deal.

Coming back to the issue of labelling, a CBC Marketplace investigation last year found several instances of farmers’ market vendors claiming their produce was local when in reality it was purchased at a central food terminal, or other producers labelling a product as organic when it was not. Such infractions undermine the trust eaters have in farmers, which also negatively affects market access in Canada. A more strictly enforced labelling regime could improve that situation.

As Canadian consumers request more local food, farmers need to be able to meet that demand through regional food processing systems that have scale-appropriate regulations. Abattoirs that process 100 animals a week, where the inspector sees every single animal, do not pose the same food safety risks as an abattoir that process 1,000 animals a minute. Without these local businesses, farmers will not be able to supply their local markets with the safe, healthy food demanded by appreciative eaters.

What does our national food system look like in 50 years? Who controls it and what input will citizens have? Do rural communities shrink and merge, undercutting the infrastructure that supports local farms? Does sprawl-based economic growth overrule long-term, community-based, sustainable and scalable models of planning? Do towns die because costs go up, income and jobs decrease, government-imposed costs of compliance balloon, and people quit making the effort, broken by their lack of options?

Or is there an alternative? Do farmers of all sizes make a living wage that they can spend locally so that their communities thrive? Do services and infrastructure grow as farmers return to the land? Do we mitigate climate change through sustainable farming practices? Do new farmers have access to farmland through transition programs that reward retiring farmers with a fair pension so they don’t have to cash out their farm operations?

To take control of our food sovereignty, eaters must continue to vote with their wallets, of course. But when politicians come knocking at election time, those same eaters can also let would-be federal or provincial politicians know how important local food is to them as a constituent.