Home › Publications › The Monitor › Capitalism vs. Us

A review of Naomi Klein’s new book, "This Changes Everything: Capitalism vs. The Climate"
Author(s):
Stuart Trew
September 22, 2014

Naomi Klein writes important books and has very good timing. But as we’re warned in her latest, the meticulously researched and predictably impressive This Changes Everything, time is something we’ve finally run out of.

The climate emergency is no longer our grandchildren’s problem: it’s ours, it’s inescapable and it’s going to mean working against, not with, the capitalists and stubborn governments doing everything, by doing nothing, to make it worse. The professional environmentalists and celebrity philanthropists, notes Klein, with special derision for Virgin CEO Richard Branson, have utterly failed us. It’s time to force the powers that be into a greener more equitable future. 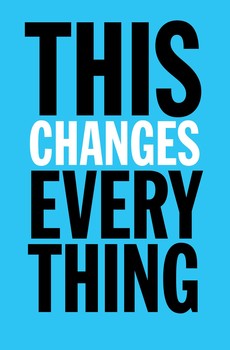 This is confrontational stuff. It excludes certain people from the conversation: climate-denying think tanks, geo-engineering fantasists, oil and gas industry–financed environmental organizations. But it includes a far greater number, namely everyone who would be better off from a publicly orchestrated and financed shift to renewable energy, community management of scarce resources, more accessible universal public services, and the equitable sharing of wealth.

I’m trying here to use “we,” “us” and “our” as carefully and intentionally as I think Klein does throughout the book. The author is not limiting her audience—she is trying to grow it.

No Logo came out a month after the 1999 WTO protest in Seattle, providing a bible for the unified (if, as the author lamented at the recent Ottawa Peoples’ Social Forum, ultimately short-lived) anti-globalization movement. In 2007, The Shock Doctrine made sense of why capitalism vanquished so totally in the post-Communist era, how it thrived in the rubble of natural and man-made disasters like Hurricane Katrina or Bush’s adventures in Iraq, and how it would lead to dystopian levels of inequality unless it could be stopped… by somebody.

The somebodies in both books were hard-working community activists resisting the juggernaut of free-market globalization, re-creating a more sustainable way of living, and occasionally convincing their governments that these were desirable and achievable goals. They were often people from communities on the experimental edges of neoliberal–imperialist expansion, like the Argentine workers who took back their bankrupt factories in the 2004 Klein–Lewis documentary, The Take.

But these somebodies were also sometimes from the Global North, pressuring Nike to pay its workers more money, for example, or organizing a transnational movement to stop the Free Trade Areas of the Americas, NAFTA’s ill-fated expansion into an increasingly “pink” Latin America.

The difference in This Changes Everything is that these somebodies and their alternatives are not relegated to a single hopeful chapter at Page 480. They greet us in the introduction, walk with us through every chapter and, though it’s Klein speaking, ask us to join them in blockading the climate criminals.

More than the Shock Doctrine, Klein’s latest is about North America, home of the fracking boom and GHG-belching tar sands but also the four-year Keystone pipeline delay, growing Indigenous–settler solidarity and an Ontario Green Energy Act that combined local job creation with the transition to renewables. (The policy was declared illegal by the WTO in 2013, a travesty Klein describes at some length in a section on the problem of free trade, excerpted recently in the Globe and Mail.)

We visit the Elsipogtog who continue to bravely stand against seismic testing for shale gas on their land, as well as the Pine Ridge Reservation in South Dakota, where a Lakota social entrepreneur is bringing solar power and jobs to a community that might otherwise feel pressured to let the coal industry tear up the earth.

We read about Canadian mining companies using trade agreements to pressure countries to let destructive projects move forward but also about communities in Greece and Romania who can fill the city centre on a few minutes’ notice of an impending police raid against a peaceful anti-mining protest. As is often the case, the mines are both Canadian-owned. Klein connects these struggles to a common threat (climate change) and a common goal (system change).

“This infrastructure of death is bringing us together to defend life,” she told the Peoples’ Social Forum, itself the embodiment of Klein’s statement. To save ourselves we have to stop the emissions, and that means standing in the way of pipelines, oil and gas projects and other extractivist violations of community and ecology. But Klein insists we need to simultaneously propose alternatives. Although it’s possible to get bogged down here on how different we can be as unique communities, when you see them written down, the solutions Klein proposes are obvious.

“We will need comprehensive policies and programs that make low-carbon choices easy and convenient for everyone,” she writes about 100 pages into This Changes Everything. “That means cheap public transit and clean light rail accessible to all; affordable, energy-efficient housing along those transit lines; cities planned for high-density living; bike lanes in which riders aren’t asked to risk their lives to get to work; land management that discourages sprawl and encourages local, low-energy forms of agriculture; urban design that clusters essential services like schools and health care along transit routes and in pedestrian-friendly areas; programs that require manufacturers to be responsible for the electronic waste they produce, and to radically reduce built-in redundancies and obsolescences.”

But who’s going to pay for all this?

One of the most satisfying parts of Klein’s book (for a CCPA type) was her list of potential income sources for “the great transition,” as she calls it. They include a low-rate financial transaction tax on trades of stocks and derivatives, netting US$650 billion annually; a 1% billionaire’s tax that could add another US$46 billion to that; a US$50 tax per metric tonne of Co2 emitted in developed countries, worth US$450 billion a year, and; killing global fossil fuel subsidies, estimated at US$775 billion annually, among other measures.

In other words, Klein says the polluters and those most capable of sparing some of their incredible wealth will pay—the greatest transfer of wealth from the haves to the have-nots, within and between countries, ever conceived since perhaps the Marshall Plan in Europe following the Second World War.

It will not be a voluntary transfer. Klein is ruthless in her condemnation of the half-measures of billionaires like Bill Gates, Richard Branson and Michael Bloomberg. Their efforts are stripped bare in a chapter called “No Messiahs.”

Klein shows how Branson in particular failed to get even close to his pledge, made eight years ago, to spend £3 billion (CDN$5.37 billion) on the green technologies of the future. He did, however, massively expand his gas-guzzling airline business during that time. The problem is a “win-win” attitude that believes environmental protection must be profitable, and fit within a neoliberal framework, to be successful—a brain virus that inflicts far too many of the largest U.S. ENGOs, says Klein.

Which brings us back to timing. This Changes Everything launched fortuitously close to the September 21 climate summit in New York City—the largest gathering of environmental activists in the history of the campaign, according to organizers. ENGOs who had vested so much energy into a positive outcome at the Copenhagen Climate Change Conference in 2009 came away in tears, also described by Klein in her book. This year, in New York, they were on the street with anti-fracking, anti-mining, environmental justice, fair minimum wage and other activists whose voices are much stronger when they come together.

“Rather than the ultimate expression of the shock doctrine—a frenzy of new resource grabs and repression—climate change can be a People’s Shock, a blow from below,” writes Klein. “It can disperse power into the hands of the many rather than consolidating it in the hands of the few, and radically expand the commons, rather than auctioning it off in pieces.”’

Klein tells us in her introduction that she was trying to avoid the climate debate; that environmental issues were too complicated and someone else was probably looking after them. She says she fought back pessimism that the solutions were impractical and that the will to change course wasn’t there. In researching the book, however, the potential for a mass movement based on the climate threat overpowered her pessimism.

The money is already there, the renewable technology to replace carbon-based power already exists, the framework for transferring both wealth and technology from the climate change–causing north to the climate change–ravaged south would not be difficult to establish. But none of it will happen unless people stop asking their governments to do something and to leave them no option. This is a political struggle, not an environmentalist’s mathematical puzzle. “[W]e do not need to be spectators in all this: politicians aren’t the only ones with the power to declare a crisis. Mass movements of regular people can declare one too.”

Others have no doubt made this case before, in books and important reports and documentary films. But hey, this is Naomi Klein. This will be read by many, debated very publicly in the news, and hated by all the right people. This might really change everything, or at least achieve its main goal, which is to rally disparate movements together to fight climate change as a social justice cause. That means stopping the emissions, blocking the pipelines, closing the mines, and killing the free trade agreements that lock in corporate power—because our survival depends on it. And it can only make the world a better place.

Stuart Trew is the editor of the CCPA Monitor.