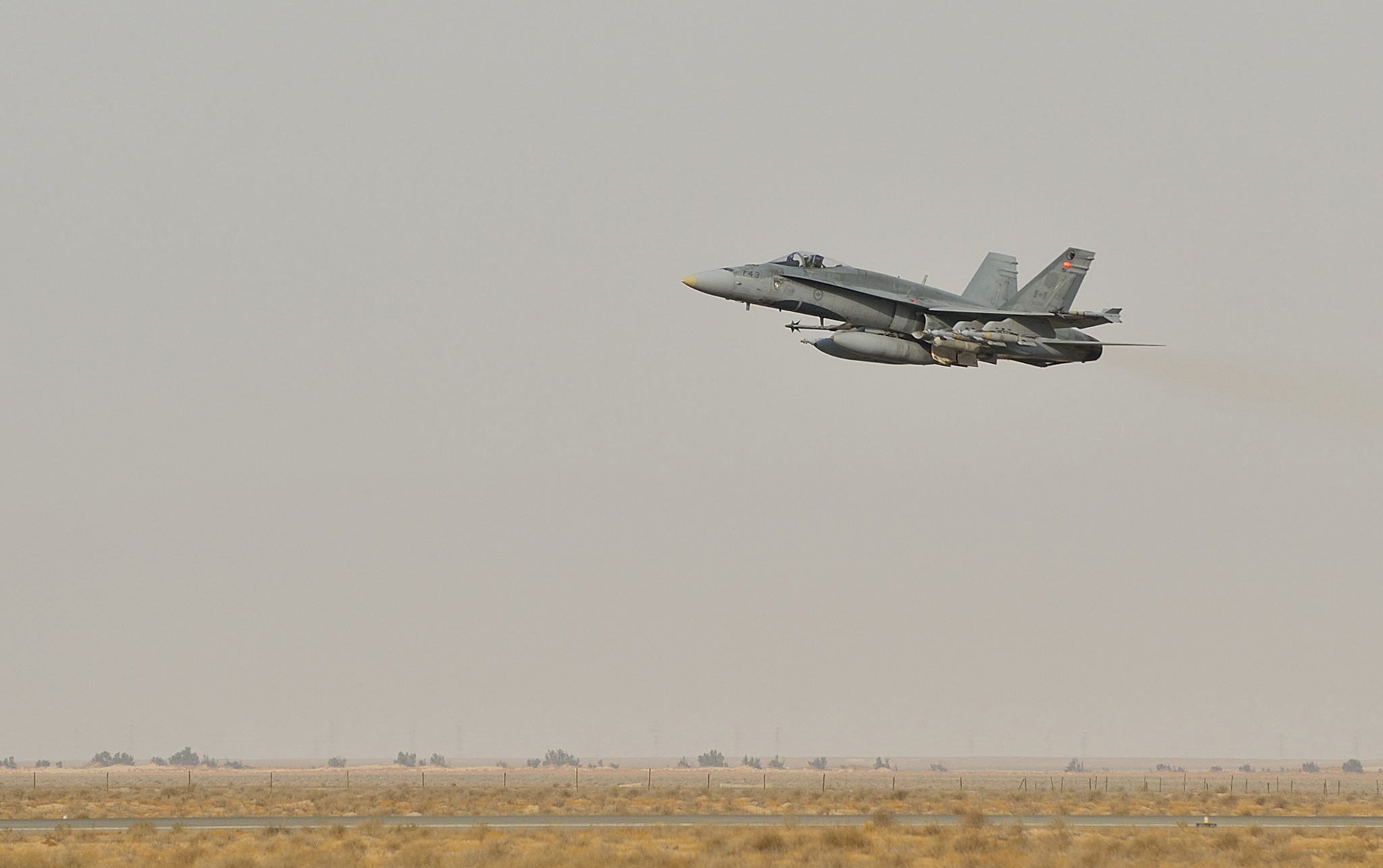 The U.S.-led air campaign being waged in Iraq and Syria against Islamic State features a cast of regional allies, including Saudi Arabia, Egypt and the United Arab Emirates, whose repressive governance, gross human rights abuses and stifling of political dissent fuel the very terrorism the West says it is fighting. The current military campaign is a recipe for a long conflict and further regional destabilization, the very conditions in which violent extremists like Islamic State thrive and grow. What we need instead is a comprehensive political strategy, with regional Arab allies at the core of a solution, that privileges rule of law and governments in the Middle East that have legitimacy in the eyes of their people.

To date Western military action has been disastrously counterproductive. Prime Minister Harper says we are not responsible for the chaos in Libya. Yet it is absolutely clear that our military victory in Libya was a pyrrhic one that paved the way for a civil war that rages to this day. We armed ISIL fighters in Libya in their fight against Gadhafi, and, when the president fell, they got the mountains of weapons released from his arsenal—weapons that helped destabilize not only Libya but the broader sub-region including Mali. We armed ISIL fighters opposing the government of Syria until we realized they were more dangerous than the Assad regime. Now the West is bombing ISIL in Syria, leaving Assad free to bomb our allies, the so-called “moderate” opposition.

While Iran is fighting with Assad in Syria (and therefore against the forces the West backs), the main ground force countering ISIL in Iraq today—all the rhetoric about the Kurdish Peshmerga fighters notwithstanding—is the Iranian-backed Shia militias, necessitating de facto military co-ordination between the USA and Iran.

We have to constantly remind ourselves how we got to this point. The West chose war over negotiations. Had NATO not exceeded its UN mandate in Libya (which did not authorize regime change), a power-sharing deal could have been negotiated with Gadhafi, which would have facilitated incremental democratic reform under international supervision, and not left a power vacuum to be filled by violent jihadists including ISIL. And despite Harper’s cavalier denials of responsibility, we now know that Department of National Defence intelligence officers warned his government that a Western bombing campaign against Gadhafi forces could play into the hands of extremists and lead to a lengthy civil war. Journalist David Pugliese reports that some military officers even began to privately joke that Canada’s CF-18’s were part of “al-Qaida’s air force,” but the government was not listening.

Exactly the same argument can be made for Syria. Had the West not insisted on regime change and refused to allow Iran a seat at the table (in deference to regional rival Saudi Arabia), Kofi Annan’s peace plan might have had a chance to take root. Canada’s largely rhetorical contribution to this effort was to help undermine the chances of success by siding with Saudi Arabia, which at the time was actively funding ISIL and opposing Iran’s participation.

So the West, in effect, offered Gadhafi and Assad, in turn, a choice between surrendering or fighting. Rather predictably, they each chose the latter, with utterly devastating consequences for their respective countries.

More than a military organization

As security experts like Paul Rogers of Bradford University in the U.K. and journalist and author Loretta Napoleoni have repeatedly emphasized, ISIL is not just a military organization. It governs the huge areas it controls in Iraq and Syria, providing basic services and collecting taxes.It is organized and coherent, with a well-developed ideology, however abhorrent to the West. The core is made up of seasoned fighters and an extremely motivated leadership with origins in the “dirty war” waged by the U.S. and British Special Forces in Iraq between 2006 and 2009. They survived intense air attacks and relentless special forces operations in Iraq for years.

In early February of this year, Western publics and their governments were rightly outraged by the horrific burning, then burying in asphalt, of a Jordanian pilot captured by ISIL in late December. Yet, it clearly was meant to mirror the grisly and almost certainly illegal “shake and bake” tactics of U.S. forces in Fallujah and other cities, where white phosphorus was used to burn up Iraqi fighters driven into tunnels by the relentless bombing. The orange jumpsuits of hostages held by Islamic State echo another part of the experience of these fighters and their leader, Abu Bakr-al-Baghdadi—their detention in Camp Bucca or another of the black sites run by the United States in Iraq and the region, the squalid conditions of which were veritable breeding grounds for radicalization.

Central to the Islamic State ideology is the belief that the West is out to humiliate and destroy Islam. Western military intervention validates ISIL’s role as would-be saviour of Islam from the “Christian-Zionist” crusade. Incursions, whether ground- or air-based or both, into Afghanistan, Iraq, Yemen, Pakistan, Somalia, Libya, Mali, Syria and Iraq once again, together with the failure to take any meaningful steps to staunch the open wound that is Gaza and the Occupied Territories, provide ample evidence for the Islamic State narrative of malevolent Western intentions.

Using extremely sophisticated social media tools and psychological techniques, they are instilling fear simultaneously in opponents and subjugated populations, titillating with video images of sadism and violence and promulgating a potent message of a new “Caliphate” to disaffected Muslim youth all over the world. Canadians, with our own “souverainiste” history in Quebec, should recognize the appeal that a political philosophy promising “maître chez nous” can engender.

ISIL capitalizes on local grievances to gain local support. The key to neutralizing its appeal is to begin to effectively address this huge array of legitimate political injustices and marginalization that ISIL so effectively exploits to get and maintain support. Sunnis, who make up 20% of the Iraqi population, were systematically victimized by the Western-supported, viciously sectarian Nouri al-Maliki regime in Iraq between 2006 and his departure in late 2014, and many are now supporting ISIL. For these Sunnis, Islamic State is a lesser evil than the Iranian-backed Shia militias, who see their role not so much in terms of fighting for Iraq as in defending their own long-persecuted Shiite sect.

The unity government now in place in Baghdad has a very long way to go to repair these deep sectarian rifts. Perhaps the best example of this dilemma (and the shortsightedness of a military focus that gets ahead of the politics) is the major Iraqi offensive now underway to push Islamic State out of Tikrit, the birthplace of Saddam Hussein in the Sunni heartland.

So concerned are the Americans about the prominent role of Iran in this military action—with leadership from experienced Iranian commanders and troops composed of mainly Shia militiamen—that the operation is proceeding without U.S. air support. There are huge fears that atrocities will be committed against the civilian population of Tikrit, as has happened in the past in other areas captured from ISIL. The danger is immense of achieving, at best, a tactical military victory, which further deepens the sectarian cleavages, drives more Sunnis into the ranks of ISIL, and further undermines basic security for ordinary Iraqis.

What should Canada do?

Our military contribution to the U.S.-led anti-ISIL coalition, up for renewal in early April, is symbolic at best. This is so despite a very real risk to the 69 Canadian special forces advisors who are “forward deployed” in Northern Iraq and directly engaged in ground combat targeting activities, despite their parliamentary-approved non-combat training mission.

For a government that has turned most serious foreign policy issues into props for pandering to specific voting constituencies, no matter what the cost tothe merits of the issue, this is almost the perfect war. It features bloodthirsty bad guys, a reasonably low cost (if only because Canada is dropping so few bombs)—the costs can be completely hidden anyway for “operational security” reasons until the election is safely over—and just enough risk of casualties to keep the “support the troops” mantra in play.

Oh, what a lovely war.

But if the Harper government actually wanted to do something meaningful, it would make a concerted effort to support what actually appeared to be U.S. President Obama’s preferred strategy (before the shrewdly calculated ISIL beheadings of American journalists forced his hand): “no American military solutions in Iraq; only Iraqi political solutions.” The same holds true in equal measure for Libya and Syria, the latter entering the fifth year of a civil war that a new UN report says has plunged 50% of the Syrian population into poverty and reduced the life expectancy by 20 years.

Canada could help find those urgently needed political solutions by getting fully behind the UN-led negotiations in Libya and Syria and by urging other NATO members to do the same. The Americans are apparently now backing Libyan talks but remain curiously ambivalent about the Syrian negotiations, almost as if they feared a solution being found where they were not playing a central role.

Canada’s latest contribution to Syrian peace talks was the announcement on January 21 by then foreign minister John Baird that Canada would not attend a high-level meeting, chaired by his Norwegian counterpart, on the future of Syria at the World Economic Forum in Davos, Switzerland—a meeting that included Iran. Happily for those championing a peace deal for Syria, the presence of Iran at the table is far more important than the absence of Canada.

Jason Kenney gave his inaugural speech as the new Minister of Defence on February 19 at the Conference of Defence Associations Institute 2015 Ottawa Conference on Security and Defence. In his closing comment (after remarks that referenced “bombs” or “bombing” in almost every other sentence), Kenney promised that Canada would no longer be an “honest broker as what could be more dishonest than that?”

It seems that the most Canadians can hope for is that the Harper government lets others, like Norway, take on the role of respected peace-builder.

Peggy Mason is the president of the Rideau Institute. This article is an amplification and update of a piece that first appeared in Embassy Magazine in October 2014.