Home › Publications › The Monitor › A crisis of public revenue

A crisis of public revenue

Progressive taxation can equalize and stabilize our economy while providing insurance against the next inevitable crash
Author(s):
Toby Sanger
September 1, 2018 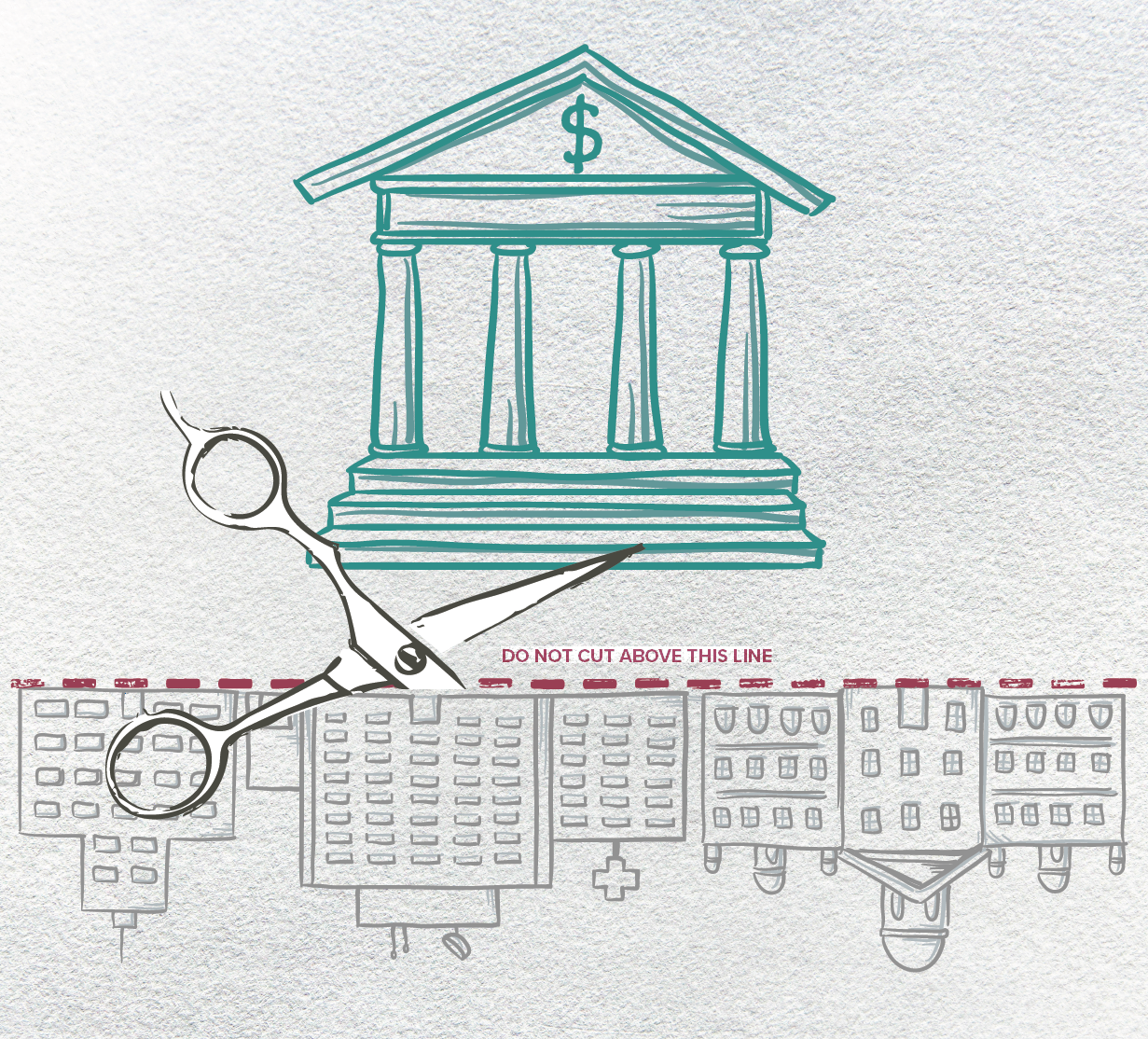 In a world where we’re blasted daily with bombastic attacks on equality and democracy by Donald Trump and his ilk, the financial and economic crisis of a decade ago can feel like a quaint memory. Yet it still has much to teach us, in particular about the power of government to manage the economy and in whose interests they typically choose to exercise that power.

The crisis exposed deep fissures of inequality and dysfunction in our economic system. Popular movements launched in response, from Occupy Wall Street to the Arab Spring to Fifteen and Fairness, won some impressive battles. The Dodd-Frank financial reforms in the U.S. brought stability to Wall Street, for example, while minimum wages were increased to $15 an hour in several North American jurisdictions, and taxes were raised on the top 1% to reduce growing inequality in this country.

But momentum on these and other fronts has been lost or diverted as centrist politicians are replaced by right-wing populists. These self-styled disruptors claim to speak for the people and promise to “get out of your pocket.” Once elected though, they almost always push through tax cuts for corporations and the wealthy, which inevitably increases deficits (Trump’s latest tax cut is expected to add US$1.85 trillion to the deficit over 10 years), creating opportunities for cutting more public services.

A progressive tax system, on the other hand, can act like a double-shot of espresso to a sluggish economy: it promotes equality while the economy is humming and insulates people from the cyclical fallout of speculative bubbles. Progressive taxes directly reduce inequalities, indirectly improve living standards for all—by generating the revenues necessary to provide public services—and improve economic efficiency by minimizing opportunities to hoard cash (and speculative profits) in offshore tax havens.

And so, with all the bad policy these right-wing populists throw at us, we simply cannot lose sight of the need for progressive tax reform. It is a tried and true insulator, equalizer and sustainable growth generator in an economy prone to devastating boom and bust cycles.

Many people believe that because personal income tax rates in Canada are relatively progressive—in that we tax higher incomes at a higher rate—so too is the overall tax system. But this claim ignores all the other taxes we pay—sales taxes, payroll taxes, property taxes and corporate taxes—that cannot claim the same mantle.

As CCPA economist Marc Lee demonstrated in a 2007 report, Canada’s overall tax system is actually much more regressive now than it was two decades ago, withthe result that the top 1% pay a lower overall rate of tax in relation to their income than all other income groups, including the poorest 10%. If the assets and income hidden offshore by corporations and the wealthy were also accounted for, these figures would look even worse.

The following tax reforms are largely responsible for this regressive situation:

These tax changes, along with a growth in user fees over the same period, were part of a concerted agenda around the world to reduce taxes on top incomes, savings, wealth and businesses and to increase reliance on consumption taxes and tax on lower incomes. Governments turned a blind eye and in many cases facilitated the expansion of tax havens, and willingly engaged in international tax competition to drive corporate rates down.

We were told these tax reforms would result in greater savings, greater investment, higher productivity and stronger economic growth: trickle-down economics, in short. It didn’t work, at least not in the ways our governments claimed it would. Instead we’ve experienced growing inequalities in both income and wealth, and record corporate profits and surpluses alongside growing household indebtedness.

Cuts to corporate taxes have helped Canadian corporations amass a hoard of over $700 billion in cash that they are not reinvesting in the economy. Meanwhile, households are shouldering the bulk of the slow recovery through debt-financed consumption.

The chart on this page shows how rates of business investment actually followed the corporate tax rate downward, slowing productivity growth in Canada. Low rates of business investment are in part a result of outsourcing and investing overseas, but also reflect low wage and demand growth, and the fact that production is becoming less capital intensive. This stockpiled cash is instead going into speculative investments or share buybacks to drive up company stock prices.

These growing imbalances and inequalities in the economy, along with lax regulation and oversight, were a major cause of the 2008-09 financial crisis and subsequent Great Recession. The particular role of the finance industry (see Ann Pettifor in this issue), and its massive public bailout following the crash, increased calls for better regulations, fairer taxation of financial companies and the introduction of financial transactions taxes to curb speculation.

But these sensible measures were strongly resisted by the powerful financial industry and their political friends, especially in the United States, Britain and Canada. A decade after the financial crisis, little has been done to prevent history from repeating itself, possibly sooner than later.

In the immediate wake of the crash, Occupy Wall Street embodied public outrage over the power of big finance and the unwillingness of Western governments to do anything about extraordinary levels of inequality. Splinter groups occupied cities around the world to demand economic policy for the 99%. This bottom-up pressure led some countries and jurisdictions to raise taxes on top incomes and either stall or reverse some cuts to corporate taxes.

While important symbolically, these measures have been fairly modest in degree and in terms of the revenue they’ve raised. There has not yet been a significant increase in the tax share paid by top incomes and corporations. Nor have total tax revenues as a share of the economy changed much in the last decade (they remain close to all-time lows federally in Canada).

Likewise, successive scandals in the news about tax havens—including the Luxembourg Leaks, Swiss Leaks, Panama Papers and Paradise Papers—have increased the public appetite to crack down on tax cheats and the large accounting firms that facilitate tax dodging. Clearly there is one set of rules for the wealthy and another for the rest of us: we pay taxes, they don’t if they can avoid it. Yet government action has been tepid here, too.

Faced with public pressure to fight tax evasion, in 2013 over 100 nations including Canada committed to an OECD “base erosion and profit shifting” (BEPS) action plan. Implementation has been slow, and five years later the Canadian government has failed to do anything on the first priority action item related to taxing e-commerce.

Large foreign digital companies such as Google, Facebook, Apple and Netflix are not required to collect or remit HST on services sold (e.g., streaming television) or advertising bought in Canada. This not only costs the federal government billions in lost tax revenues, but it has contributed to the loss of tens of thousands of news and media jobs at Canadian companies that are by law required to collect GST and/or HST.

The government could balance the playing field between domestic and foreign e-commerce firms (and raise a lot of revenue in the process) simply by applying the same tax rules to both, as the OECD endorses. For reasons unknown the Liberals are strangely reluctant to do so.

On a positive note, the Trudeau government has put money and resources toward addressing straight-up tax evasion. It has also reversed some of the former Conservative government’s highly regressive tax plans, such as income splitting, and lowered the amount of money individuals can shelter in tax-free savings accounts—an expensive federal tax expenditure that mainly benefits high-income earners.

The Liberals have created a more progressive Canada Child Benefit, expanded the Working Income Tax Benefit, eliminated a number of complicated boutique tax credits, replaced education and textbook tax credits with a better student grant program, and introduced a new top personal income tax bracket of 33% for incomes over $200,000. All of these measures have improved the fairness of the tax system.

However, the Trudeau government has made much less progress—and taken steps backward—in some other areas. The so-called “middle class tax cut,” for example, undid much of the progressiveness in the new top income tax bracket, since the government’s definition of middle class included many of Canada’s higher-income earners. Cutting the small business tax rate even further (to 9%) will also increase opportunities for tax avoidance by business owners and independent higher-income professionals.

Raising the top income tax rate will also have a limited impact as long as those who pay it can continue to avoid taxes via the stock option deduction—one of the most regressive and egregious tax loopholes in which income derived from stocks is taxed at half the rate of normal income. Corporate pressure led to the government abandoning a promise to set a cap on how much can be claimed through the stock option deduction.

The Liberals stumbled again in 2017 after introducing changes to clamp down on the use of small-business incorporation as a tool for reducing taxes among high-income professionals. Concerted opposition from the small number of people who would be most affected by the tax change gave the government cold feet, and the Trudeau government appears reluctant to follow through with a pre-election commitment to eliminate other “unfairly targeted tax breaks.”

Instead, with a federal election on the horizon next year, and President Trump having slashed corporate tax rates in the U.S. down to Canadian levels, the Trudeau government may be about to provide Canadian businesses with even more tax breaks—possibly by allowing immediate expensing of capital investments—even though, as mentioned before, corporate tax cuts have done little or nothing to boost productive investment.

Ongoing federal deficits and the need for more funding for public services will keep taxes on the agenda leading up to the 2019 federal election. Despite many setbacks, and the resurgence of anti-tax populism in Canada and south of the border, there is still momentum for progressive tax reform.

A progressive tax system will generate funds for important public services, close tax loopholes and opportunities for tax evasion, and provide relief for lower-income earners by taking relatively more from those in a better position to contribute to public revenues. As demonstrated in the Alternative Federal Budget, even Canada’s wealthiest families—whose taxes go up in a progressive system relatively more than they do for lower-income people—would benefit from enhanced public services and a more productive economy.

Looking back at the major financial crisis of 10 years ago, we should appreciate these structural economic benefits of progressive taxation. The 2008-09 crash was a failure of tax policy as well as poor financial regulation. More progressive taxation would discourage hoarding and speculation, both of which create a drag on growth, thereby freeing capital for more productive investments in productivity enhancing equipment and new employment.

It would be economically pointless and socially damaging to try and compete with right-wing populists when we know that more tax cuts will only weaken our ability to respond to the next crisis while further worsening inequality. The best way to prove them wrong would be to make the opposite move: make the tax system more progressive, and watch the benefits truly trickle down.

Toby Sanger has been the economist for the Canadian Union of Public Employees, worked in various ministries of finance, and will start as Executive Director of Canadians for Tax Fairness in October 2018. Stuart Trew is Editor of the Monitor.