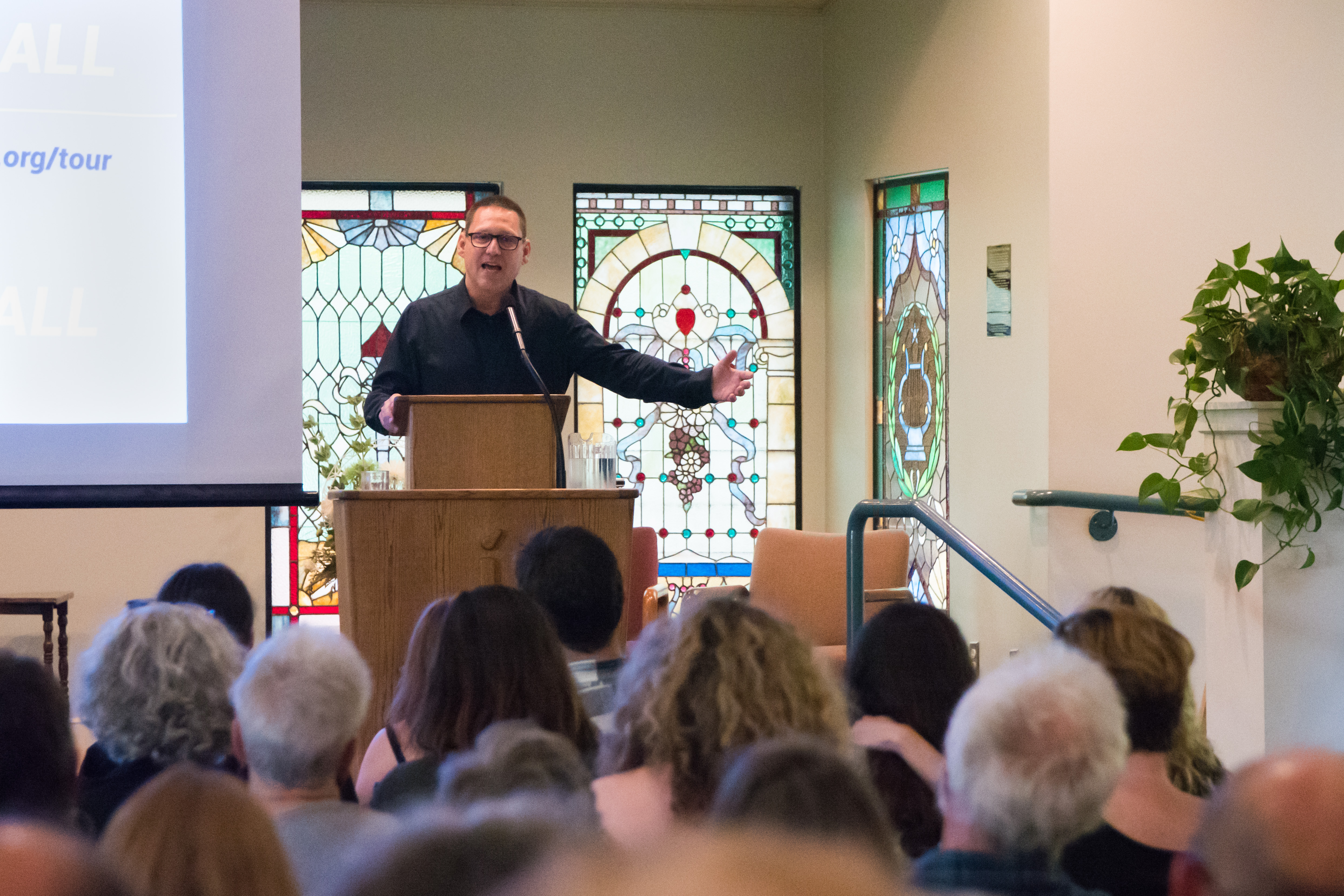 The time for piecemeal reform to fossil capitalism has passed. Cities are suffocating under deadly, record-setting heat waves. Rising, warming oceans are upending traditional weather patterns, feeding cataclysmic storms and unpredictable droughts. We are stretching the resilience of Earth’s ecosystems, testing their breaking point. A handful of people are getting very rich in the process, driving inequality to levels not seen since the days of the robber barons. This situation cannot be sustained.

The imperative for system-wide change has impelled thousands of Canadians to take action. This summer, as a lead up to the fall federal election, climate and social justice activists organized a sold-out seven-city tour in support of “A Green New Deal for All.” The tour, which was led by The Leap, tapped into international enthusiasm for the idea of rapidly building a new economy based on green jobs, living wages, and more and better social programs. In Canada, the movement has prioritized decolonization—the return of land and autonomy stolen from Indigenous communities. A recent Abacus Data poll found that 61% of Canadians like the idea of a Green New Deal, creating the potential for a much more exciting, radical debate in Canada about how we get there.

The “Green New Deal for All” tour this spring and summer hit Toronto, Montreal, Ottawa, Halifax, Edmonton, Vancouver and Winnipeg, where audiences had the opportunity to hear from Maude Barlow, El Jones, Naomi Klein, Pam Palmater, David Suzuki, Harsha Walia and other dedicated activists. The Winnipeg tour stop was organized chiefly by Our Time, a youth-led project of 350.org that is mobilizing an alliance of young people and millennial voters to push politicians to support a Green New Deal in the 2019 election. Our Time is one of 150 organizations in the Pact for a Green New Deal, which held 150 town halls across Canada, starting in May, to develop the principles and action items of a national plan.

The seven-city tour came together quickly, with national sponsorship from a wide range of progressive groups including Briarpatch Magazine, the Canadian Union of Postal Workers, Climate Strike Canada, the Council of Canadians, Courage, Delivering Community Power, and the Migrant Workers Alliance for Change. The Unitarian Universalist Church of Winnipeg, where the Manitoba event was held, along with the CCPA–Manitoba, Manitoba Building Trades, Manitoba Energy Justice, and Manitoba Sustainable Building Council also sponsored the Winnipeg event.

Before things got started, I spoke to Avi Lewis, filmmaker and co-founder of The Leap, about his goals and ambitions for the co-ordinated effort. Lewis explained that the Green New Deal is a roadmap to addressing the interconnected crises of racism, inequality and climate change on a rapid timeline, essentially by transforming our society and economy. Our response to the climate crisis must be on the scale of the response to the Depression or Second World War, he told me. But that will take a social movement big enough and powerful enough to make it real in Canada.

The Green New Deal concept emerged in the United States within the youth-led Sunrise movement and is championed in Congress by the popular democratic socialist representative Alexandria Ocasio-Cortez, who “lit things on fire,” in Lewis’s words.

“The Green New Deal exploded our political imagination on both sides of the border and around the world,” he said. “The Labour Party in the U.K. is having a strong conversation about a Green New Deal. Yanis Varoufakis, the former finance minister under Syriza in Greece, has started a new political party called DIEM25 in the European parliament, which has a Green New Deal for Europe. Everywhere this idea lands it has the potential to ignite when there is an interface between the electoral class and social movements.”

The energy at the Green New Deal for All tour stop in Winnipeg was electric, with cheering and audience responses the whole evening long. Nora Casson, co-director of the Prairie Climate Centre and one of the night’s excellent speakers, explained that climate change means more flooding in the springs, droughts in the summer and forest fires in Manitoba. Jenna Liiciious from Aboriginal Youth Opportunities challenged the crowd to really learn about the treaties, honour them, and for everyone to get in touch with their own indigeneity. Kelly Bado, a francophone Canadian artist born in Côte d’Ivoire, sang her new bilingual song, “Hey Terre,” in which she asks us to “keep on giving it up, so we can keep on living it up.” At eight months pregnant, this was Bado’s last performance before she becomes a new mom and she sent out wishes for a better world for all children. Anishinaabe hoop dancer Shanley Spence (pictured below) finished off the night with an outdoor performance alongside the Assiniboine River.

Lewis told me the tour is providing an important outlet for people feeling “surging climate grief” as we watch smoke season in the west and flood season in the east. This feeling that the climate catastrophe “is real and present and happening” has created “a potent combination, both terrifying and with a huge amount of organizing potential.” If the tour has been “incredibly intense and emotional,” he said, it is because people are fed up with the limitations our politicians have put on our options—most of them “market-based”—for moving forward with a Green New Deal. 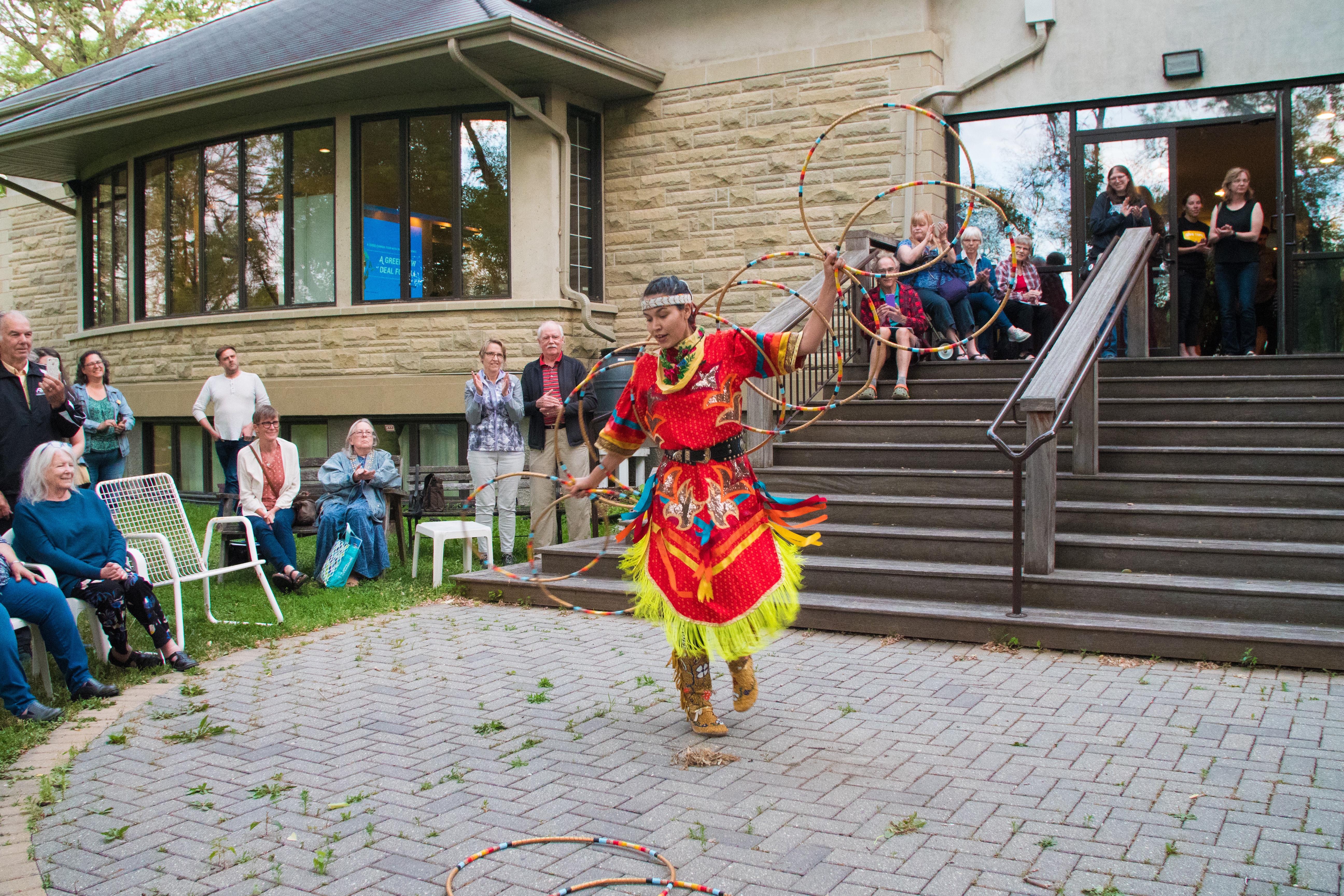 “The narrow focus on the carbon tax has meant we’ve had an insufficient debate on climate action in Canada, which could have disastrous consequences for inaction,” said Lewis. “Even if the [Pan-Canadian Framework on Clean Growth and Climate Change] were to be fully fulfilled, it would only get us two-thirds of the way to the Paris [Agreement] targets, which are only half way where we need to go to cut emissions in half, which doesn’t even begin to deal with our climate debt as a rich country with historical emissions.” Lewis emphasized that the technology and financial resources are there to help Global South countries “leap over fossil fuels.”

The Green New Deal is the left’s progressive antidote to this stale debate. Lewis’s keynote at the Winnipeg stop outlined five reasons why the campaign is workable and winnable in Canada.

Firstly, a publicly funded just transition away from fossil fuels will be a massive job creator, swelling the ranks of unions and increasing workers’ rights for all, especially the most vulnerable. The idea is to double the unionization rate and extend collective bargaining rights to millions of workers. A Canadian Green New Deal can adopt the U.S. idea of a federal jobs guarantee with a minimum wage of at least $15 an hour, and decent holidays and benefits, to “set a floor to change the dynamic between all workers and employers,” according to Lewis.

Secondly, the money that governments will spend under a Green New Deal will be spent anyway to address runaway climate change. It’s unavoidable. “Yes, this will be expensive. Like a war. Or a tax cut for the rich. Or bailing out banks and automakers,” explains a promotional video for the Green New Deal for All tour. But so will climate change–related lawsuits, disaster response and the other effects of climate chaos.

Recent reports show Canada is warming at twice the rate of the rest of the world, and these impacts will be felt differently depending on where Canadians live and their socioeconomic status. “Ignoring the climate crisis will bankrupt us, but the Green New Deal will attack inequality and create a fairer economy than we have now,” said Lewis.

Thirdly, the Green New Deal promises to save and defend life on earth and protect Indigenous land rights. Scientists warn we are already in the “sixth mass extinction,” and that a million species of plants and animals are at risk of going extinct as a result of human-caused environmental disruption. Lewis explained that the United Nations itself advocates for Indigenous-led development, pointing out that a quarter of land on Earth is traditionally owned, managed, used or occupied by Indigenous peoples who have been stewarding that land sustainably, in many instances for millennia.

Fourthly, the proponents of a Green New Deal believe that this plan is the way to meet the needs of everyday people, improve quality of life and address stagnant wages. “It connects reducing pollution to the top priorities of the most vulnerable workers and the most excluded communities,” said Lewis. As a fifth point, he added, “We’re all spending Saturday night together in a church, so let me just say it straight: the Green New Deal will be good for our souls.

“It’s not just a planet’s life support system that is unraveling,” he continued, “it’s our whole social fabric, with the rise of fake news and fascism and conspiracy [and] mass loneliness and isolation of late capitalism, we are lost in algorithms of envy and anger.” The Green New Deal restores a sense of collective purpose, said Lewis.

Can the energy of the “Green New Deal for All” tour ripple out into the public conscience enough to impact this fall’s federal debate? The Green Party and the NDP are already including Green New Deal–like language in their platforms. It’s a start, according to some of the organizers of the Winnipeg tour stop, who plan to heighten efforts in the lead up to the federal election on October 21. Like the Sunrise movement in the U.S., they are calling on candidates to pledge to support a Green New Deal, and for voters to pledge their votes to Green New Deal political champions.

The Pact for the Green New Deal is synthesizing the input from the 150 town halls into a civil society vision for a Green New Deal for Canada. Our Time is calling for a federal leaders’ debate on the climate crisis and the Green New Deal. These mostly young people are part of a global movement that is organizing Friday student strikes for the climate, including a massive global student strike on Friday, September 20. A week of action and an all-out global climate strike are also planned for September 27.

These times call for urgent and radical responses, not half-measures. At the end of our interview, right before he hit the stage, Lewis wondered if we can “locate our revolutionary souls in this moment.” Youth leaders and climate activists have found theirs. They are calling on all of us to do so now.

Molly McCracken is Director of the CCPA-Manitoba.