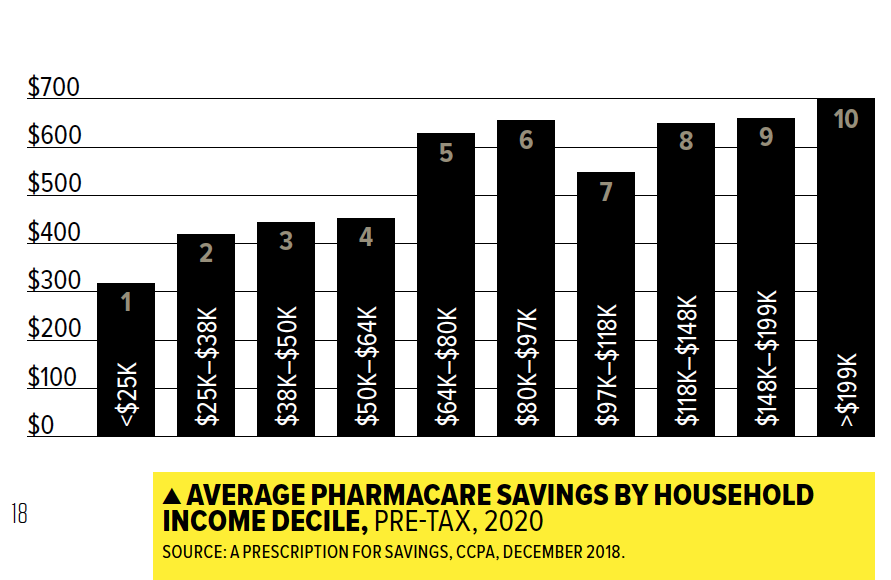 Canada has been debating the adoption of a national pharmacare program for over half a century. Our current patchwork system of drug coverage leaves countless people falling through the cracks. Approximately 20% of Canadians have inadequate drug coverage. Currently, one in four households can’t afford their medications. One million Canadians are having to choose between putting food on the table and getting the medications they need. Canada is the only country in the world with a universal health care system that doesn’t cover prescription medication.

In 2018, the federal government appointed an advisory council led by Dr. Erik Hoskins, a former Ontario health minister, to consider the implementation of national pharmacare. After studying options and consulting widely, in June 2019 the council called for the adoption of a public, universal pharmacare program that would provide equitable access to medications for people across the country. The federal government took steps in this direction by allocating $35 million in the 2019 budget to establish a new Canadian Drug Agency that would negotiate drug prices and develop a national formulary—a list of medications that would be covered by public insurance. But the fate of national pharmacare may ultimately hinge on the outcome of the upcoming federal election.

Although the majority of Canadians already have some form of drug coverage—most often through their employers—the current patchwork system is inefficient and inequitable. There are over 100,000 private drug plans in Canada that provide different levels of coverage. Since these plans are usually tied to people’s jobs, people risk losing their coverage if they lose or change jobs, or if they retire. Many plans have expensive deductibles (out-of-pocket payments before coverage kicks in) and copayments, and some also have monthly or yearly maximum claim amounts. Out-of-pocket expenses can therefore be significant even for people who have drug plans.

Improving access to medication would obviously lead to a healthier population. When people skip their medication because they can’t afford it, they end up getting sicker and often die prematurely. There are over 300,000 extra doctor’s visits every year and nearly 100,000 visits to emergency because people can’t afford to take their medication as prescribed. This results in approximately $7–$9 billion in extra costs to the health care system annually. Universal pharmacare would therefore improve people’s health and take some pressure off the health care system.

Numerous studies have also shown that universal pharmacare would be good for the economy. We could save up to $11 billion per year by negotiating better prices for medications. Canada currently pays the third highest prices for prescription medication among OECD countries. We spend more on medication than we do on doctors. That’s because all the different drug plans currently negotiate prices separately with pharmaceutical companies. By bulk buying medications for the country as a whole, we would have much stronger bargaining power.

These savings can only be achieved with a universal, public program. We shouldn’t just “fill in the gaps” by providing coverage for those who don’t currently have any, since that would simply add yet another layer to our inequitable system. It wouldn’t allow us to benefit from the reduced costs achieved through bulk purchasing and it wouldn’t limit the rising out-of-pocket expenses of those who currently have coverage. It would leave the majority of Canadians vulnerable to losing their coverage if their employment situation changes.

Only a universal, public pharmacare program would ensure that everyone in Canada can access the medications they need. Instead of adopting half-measures and band-aid solutions, it’s time to reform our broken system. Pharmacare is a key missing piece of Canada’s public health care system. This much-needed new program would save money and save lives. It should be a priority for the next government. We have all the evidence we need. Now we need to take action and cross the finish line.

Melanie Benard is the National Director of Policy and Advocacy with the Canadian Health Coalition.