Home › Publications › The Monitor › Extractive populism and the future of Canada

Extractive populism and the future of Canada 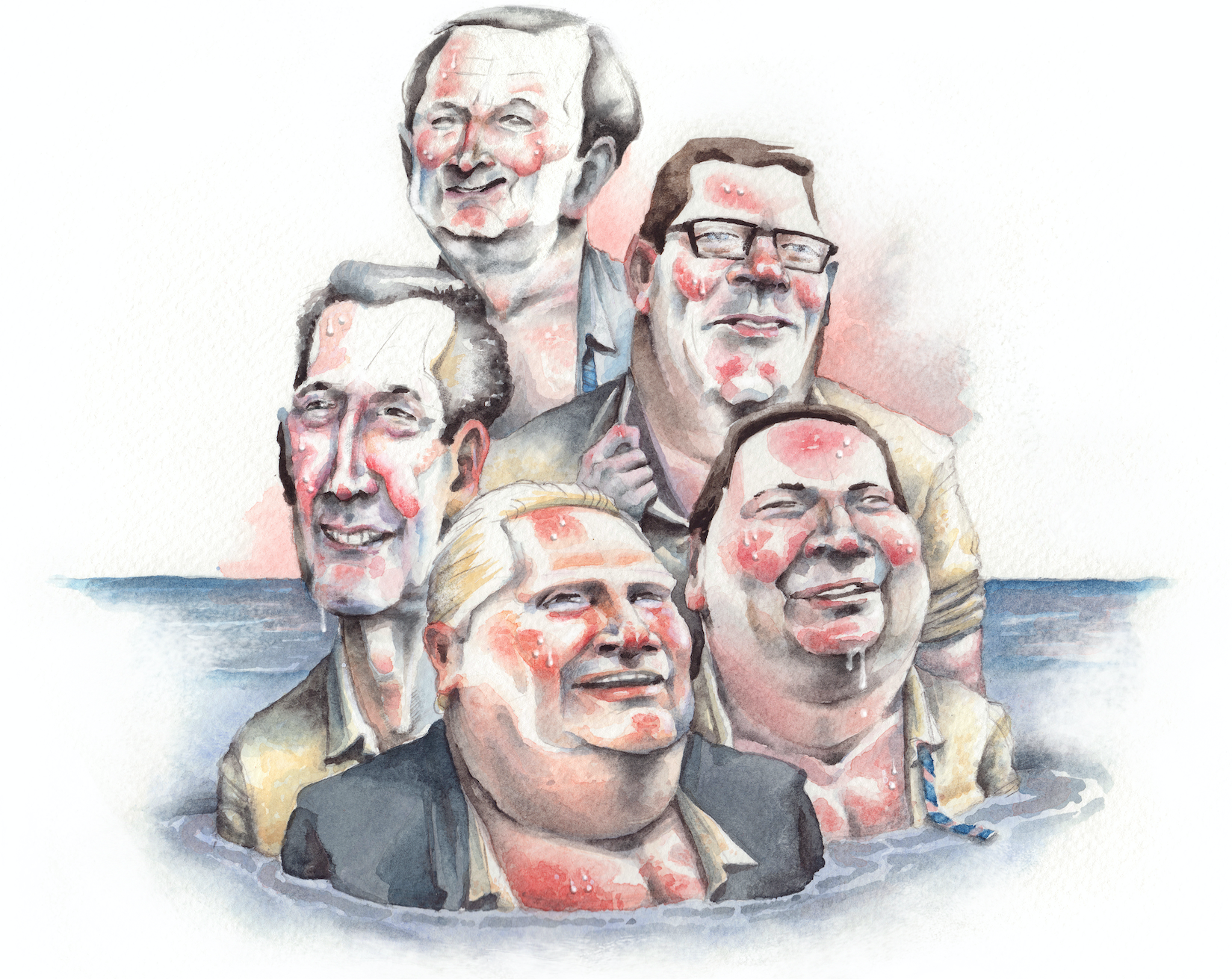 Jason Kenney’s victory in the recent Alberta election is but the latest manifestation of extractive populism, an inflammatory brand of political rhetoric that has increasingly taken centre stage across the country. Understanding how and why this rhetoric works, and developing strategies to challenge it, are essential in building a different vision for Canada—one that sees our well-being as dependent upon a transformative program of decarbonization anchored in principles of social, environmental and Indigenous justice.

The “grand bargain” championed by Justin Trudeau and Rachel Notley, in which support for a modest carbon tax afforded “social licence” for new pipelines and tar sands expansion, has proven a spectacular failure. Instead, those like Alberta Premier Jason Kenney, who seek to rally support for extractivism, are increasingly deploying a populist storyline built upon three core claims.

The first claim of extractive populism is that the extraction and export of resources such as oil, natural gas and coal constitutes the core of the Canadian economy and provides a wide range of benefits to everyone in the country. A robust and healthy extractive sector is positioned as a public good generating high-paying jobs for workers, opportunities for businesses, and revenues for governments and public services.

The recent “Keep Canada Working” campaign from the Alberta government is one example of the hundreds of millions of dollars that have been spent hammering home this basic message over the past two decades. In addition to paid advertising, this first claim of extractivism remains dominant within mainstream Canadian news media, and is especially prominent in the Postmedia chain, infamous for its aggressive and uncompromising advocacy on behalf of the oil and gas industry.

The principal rhetorical strategy through which “the people” and the petro-industrial complex are sutured together is symbolic nationalization. The fossil fuel industry in Canada is a corporate-driven, for-profit capitalist enterprise, managed and operated first and foremost in the interests of (often global) shareholders. Yet everywhere one looks it appears as if this industry has been nationalized and run to serve the interests of all Canadians.

It is worth reminding ourselves how bitterly the fossil fuel industry and Alberta resisted the National Energy Program in the 1980s, a very mild form of nationalization that was promoted at the time as delivering “Canadian oil for Canadians.” While the oil and gas sectors fiercely opposed this “real” nationalization as a threat to corporate profit and private sector–led development, they gradually realized that symbolic forms of nationalization were extremely useful in legitimating the tar sands for publics outside of Alberta.

Consequently, over the last two decades Canadians have been subject to a flood of advertising and public relations, think-tank reports, speeches from politicians and corporate executives, sympathetic news coverage and, most recently, social media campaigns that consistently portray the oil and gas sector as if it had been nationalized, was a public enterprise designed to serve the common good, and that its primary purpose was the provision of jobs and tax revenue and energy security for all Canadians.

Wrapped in the flag, the capitalist logic of the oil and gas industry that puts corporate profits ahead of the public (and planetary) good recedes from view, and extractivism is positioned as a constitutive part of what makes us all Canadian. It is, literally, “who we are and what we do,” as the late Jim Prentice memorably put it in a 2012 speech to the Business Council of British Columbia.

The second claim is that extractivism is under attack, threatened by a small but highly vocal and surprisingly powerful constellation of political forces.

While cultivating fears of external enemies is a common tactic of industry advocates in Alberta, the rhetoric was fully nationalized when former natural resources minister Joe Oliver viciously attacked pipeline and tar sands opponents as “foreign-funded radicals” in January 2012. Environmental organizations and “other radical groups,” he wrote, aim to “stop any major project no matter what the cost to Canadian families in lost jobs and economic growth.” These groups “threaten to hijack our regulatory system to achieve their radical ideological agenda.... They use funding from foreign special interest groups to undermine Canada’s national economic interest.”

Similarly inflammatory rhetoric continues to be prominently featured in corporate media, which regularly affords industry shills such as Oliver, former B.C. attorney general Suzanne Anton and Gwyn Morgan, Fraser Institute trustee and founder of Encana, top billing to peddle this conspiracy theory. Such sentiments sponsor a head-in-the-sands worldview in which the challenges faced by the oil and gas industry are not predominantly driven by climate change or global markets or reduced demand, or even bad planning, but instead are the consequence of insidious forces seeking to sabotage the Canadian economy.

In a forthcoming Corporate Mapping Project–funded study of the pro-oil social media campaigns that have exploded in this country in recent years, the demonization of opponents was the most prominent theme in industry-friendly Facebook groups such as Oil Sands Action, Oil Respect and Oil Sands Strong. Their favourite targets are eco-celebrities such as Leonardo DiCaprio and Al Gore, easy marks that enable these groups to misrepresent any and all criticism of industry as a foreign import, orchestrated by wealthy, liberal, hypocritical global elites who know or care little about Canada. Local activists and groups are positioned as “paid protesters” doing the bidding of wealthy U.S. foundations, thereby defining opposition to tar sands and pipelines as fundamentally anti-Canadian.

Such one-dimensional accounts overlook the diverse and vigorous homegrown resistance to extractivism growing in every part of the country, not to mention the majority of Canadians who recognize the need to transition away from dependence on fossil fuels. More alarming, though, is how toxic such petro-nationalism is in a social media environment that both enables and encourages the episodic swarming of activists, especially women.

The violent, often misogynistic sentiments that are morally licensed by the routine condemnation of environmentalists as traitors to their country—as actively working to undermine the livelihoods of Canadian families—is shocking and among the most alarming and repugnant features of extractive populist rhetoric. It betrays traditions of civility and respectful dialogue that Canadians have long valued as the cornerstones of our political culture.

And it is worth recalling that when this denunciation of external enemies was initially pioneered in Alberta in the 1980s, Canada—in the form of a federal government seeking “Canadian oil for Canadians”—was cast as the villain, not the victim. The “Eastern bastards,” so to speak. Or, as our last prime minister once defined Canada in a 1997 speech to U.S. conservatives, “a Northern European welfare state in the worst sense of the term.”

The conservative, nationalist and extractivist makeover of Canada and what constitutes the so-called national interest is surely among the most significant, shortsighted and corrosive changes to our politics in recent years.

Extractive populism’s third major claim is that collective political mobilization is necessary to defend the “national interest” from the sinister forces that threaten it.

The remarkable success of Indigenous, environmental and local community resistance to pipeline projects, especially Northern Gateway, created a lot of anxiety in the C-suites of the oil and gas industry. Industry groups such as the Canadian Association of Petroleum Producers (CAPP) worried that their traditional tools of corporate power—back-door lobbying, influence over corporate media, big-budget ad campaigns—were no longer as effective in shaping political discourse and opinion around oil and gas. Inspired by initiatives at the American Petroleum Institute, CAPP decided to aggressively mobilize those constituencies most likely to support their agenda: oil industry workers, resource dependent communities, conservatives.

Over the past four years, CAPP has poured significant resources into cultivating what the lobby group describes as “Canada’s Energy Citizens,” individuals willing to actively engage in the public sphere to defend industry through social media, attending rallies, writing their MPs, talking to their friends and neighbours, and so on. Some of this activity constitutes classic astroturfing—the re-presentation of corporate-driven public relations as grassroots campaigning. But it is a mistake to dismiss these efforts as simple industry propaganda.

In fact, the corporate resources going into these initiatives serve to subsidize—to activate, co-ordinate, influence and amplify—the voices of those who have come to believe that their prosperity and way of life is dependent upon extractivism. Channelling the deep and legitimate anxiety that so many feel about the future into support for one of the most powerful (and destructive) industries on the planet may well be the most Orwellian feature of extractivist political discourse.

Extractive populism can and must be challenged on many fronts. Among the most urgent tasks, we need to directly confront the symbolic nationalization that lies at its core, by developing distinctive visions of Canada in opposition to petro-nationalism. We must vigorously contest the presumption that what’s good for Suncor and Imperial Oil and the banks that finance them is good for all of us.

Over the last several decades, much has been done to illuminate the darker corners of our country’s history and politics, exposing the complicity of Canadian institutions in experiences of dispossession, oppression and exploitation. We have a much better understanding of how and why our government has operated, and continues to operate, as a colonial, capitalist petro-state presiding over a legacy of violence, inequality and injustice.

But if that is all that Canada is—if we are willing to accept a petro-nationalist vision in which, as Jim Prentice put it, extractivism really is “who we are and what we do”—it becomes that much harder to challenge one-dimensional accounts that equate our “national interest” with the fossil fuel industry. More importantly, it will be much harder to engage our fellow Canadians in the vital task of imagining what we want this country to become.

“We are not the country we thought we were.” With those words, the late Gord Downie invited us to acknowledge and address the secret violence that lies at the core of our history. But they also serve as a call to action, to build a country and society more in keeping with the values of democracy, equality, justice, diversity, compassion and sustainability—values that so many Canadians continue to hold as the true measure of who we are and what we do.

Shane Gunster teaches in the School of Communication at Simon Fraser University and is a research associate with the CCPA. His research focuses on media and advocacy communications related to the politics of energy and climate. His latest co-authored book is Journalism and Climate Crisis: Public Engagement, Media Alternatives (Routledge, 2017).