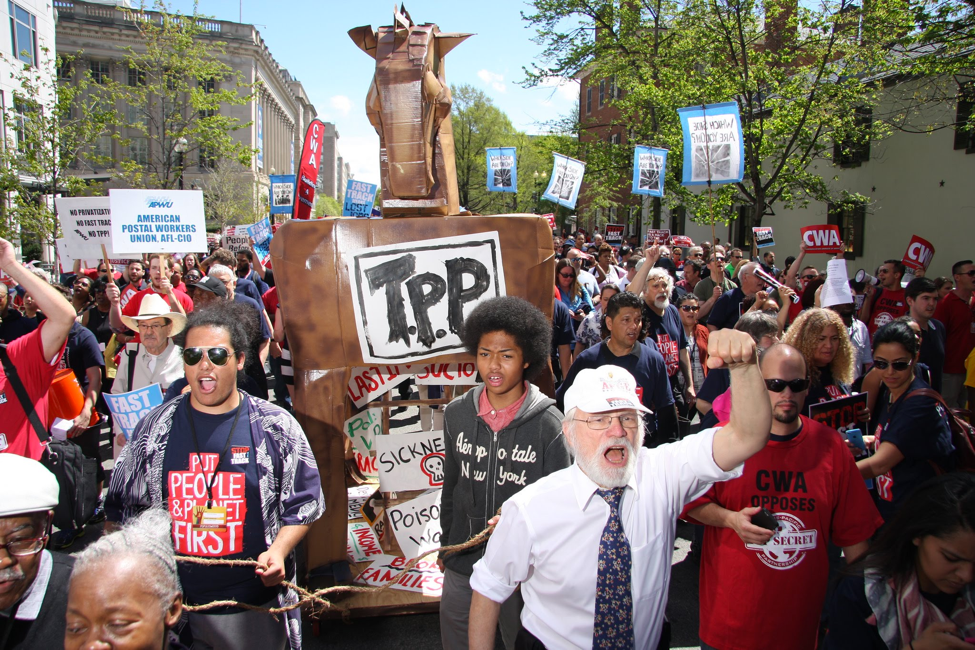 The campaign against the Trans-Pacific Partnership (TPP) in the United States has reached unprecedented proportions. The movement has surpassed its core group of labour unions and activist groups to include members of the general public not traditionally concerned with “trade” issues—because the TPP is not really about trade at all.

That is the key message behind the recent, extraordinary backlash against the status quo, corporate-driven model of trade that the presidential campaign season has unveiled. A “trade” pact negotiated with 500 corporate advisors under extreme secrecy, the TPP has become the primary target of the present day outrage over corporate threats to our democracy.

Both major parties’ candidates oppose the deal, as do most House Democrats and a sizeable bloc of House Republicans. More and more representatives who voted for “fast track” authority for the TPP last year are now responding to their constituents’ demands and moving to oppose the TPP itself. Democratic vice presidential nominee Senator Tim Kaine is in that camp, changing his stance on the deal due to unacceptable provisions in the final text, such as the undemocratic investor–state dispute settlement (ISDS) system.

In the United States, the threat of ISDS became much more real this year. After the historic victory of Indigenous and environmental activists over the construction of the Keystone XL pipeline, TransCanada, the corporation behind Keystone, launched a $15-billion ISDS claim against us. The TPP would also threaten our food safety, jack up medicine prices, and shirk the global community’s responsibility to meaningfully address labour standards and human rights.

Despite the array of horrors in the deal and the growing, trans-partisan opposition to it in the United States, the TPP is not yet dead. Disappointingly, President Barack Obama has been promoting the pact with a passion not seen from this administration on any other initiative, including his signature health care reform—twisting arms and calling in favours to get members of Congress to fall in line.

The good news is the pro-TPP forces still do not have the votes they need to pass the House of Representatives. That so many representatives have publicly opposed the TPP despite the dual pressures from the White House and the business lobby is a testament to the voter outrage over this corporate-rigged pact.

Given the unprecedented level of opposition, TPP proponents know that their only shot at passing the deal, according to U.S. Vice-President Joe Biden, is by sneaking it through in the “lame-duck” session of Congress—the unique moment in the legislative calendar after the November election, when members who have retired or been voted out of office can still make decisions and are the least accountable to their constituents.

American civil society organizations—labour, environmental, faith, consumer, family farm, youth, LGBT, civil rights, senior citizen, public health and other groups—are taking advantage of this critical time before the election. For instance, a cancer patient, mother and activist was just arrested protesting the TPP at the office of an undecided representative; the video of her calm, concise TPP critique while in handcuffs has been watched by hundreds of thousands of people.

Across the country, musicians and other celebrities have been educating and entertaining the public in a Rock Against the TPP concert tour. The goal of this diverse coalition is to get undecided members of Congress on the record right now, when the political price of failing to oppose the TPP can be fully paid, and to continue to educate the general public about the TPP corporate power-grab.