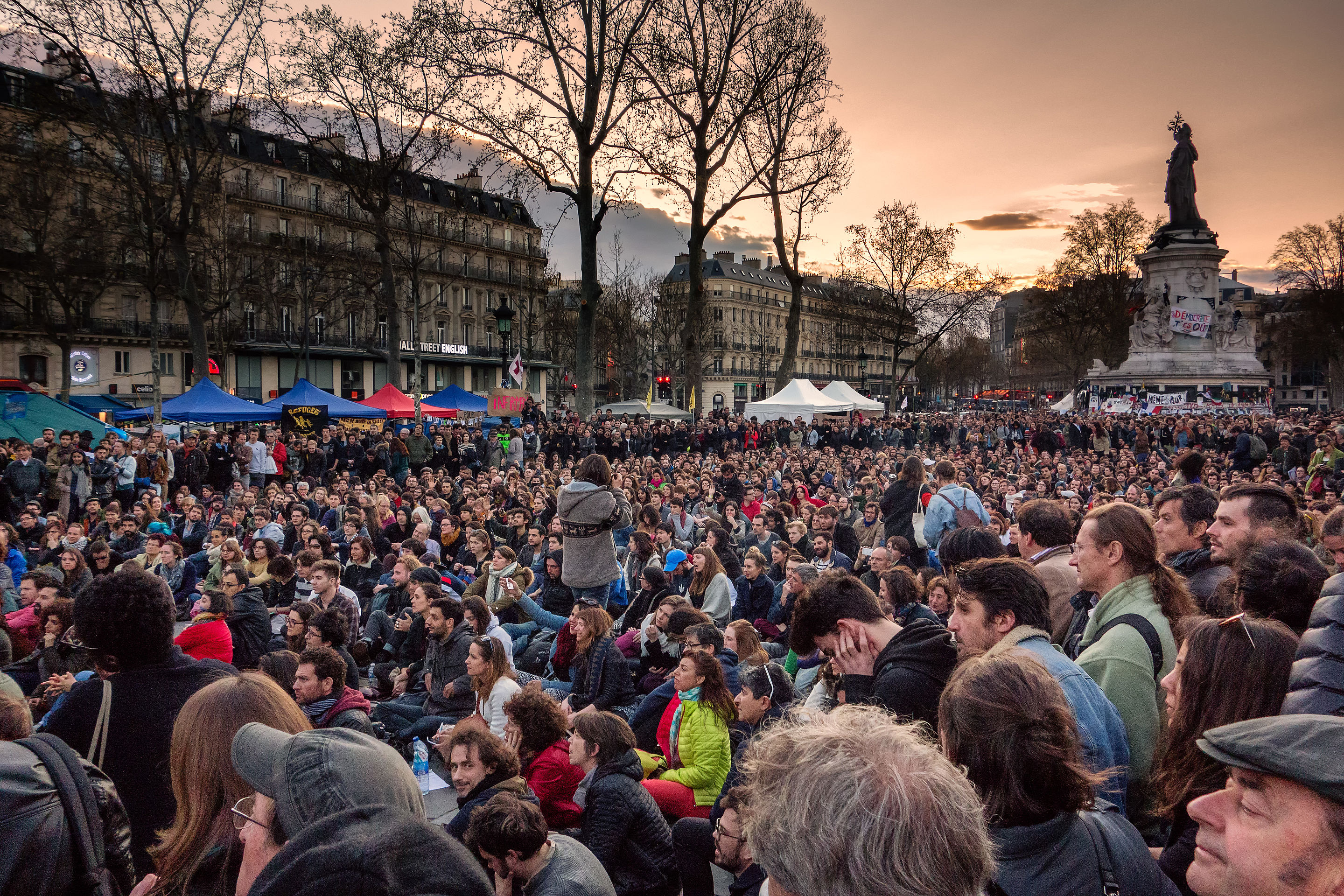 Some of the largest demonstrations and labour strikes France has ever seen spread across the country from March to July. The action is set to continue in September as hundreds of thousands of workers and students protest a neoliberal labour law forced through the national assembly by the ruling Socialist Party (PS) led by President François Hollande.

The government passed the Loi Travail in July without debate or a vote (Hollande invoked a rarely used article of the French constitution that allows the president to rule by decree). The labour reform makes it easier for employers to hire and fire employees, and to impose wages and working hours. Hollande’s reforms, which are opposed by a large majority of the French public, threaten labour rights won by French workers in struggles over the course of the last century.

“This law is not just bad by itself but signifies the destruction of the entire legal architecture protecting workers’ rights in France,” Jean-Yves Lesage explains to me. Lesage is a printer in a newspaper plant who has been a union activist and member of the General Confederation of Labour (CGT), France’s largest union federation, for 30 years. The CGT is close to the French Communist Party and is leading the protests against Hollande’s labour reform.

“This architecture is very important because it gives every worker a minimum standard of labour rights even where the trade union is weak or non-existent,” says Lesage. “The new labour law changes this architecture and accepts that a workplace labour agreement could be of a lower standard than a sector-wide agreement, which in turn could be below that of the national standard for labour rights. The door is then open to force workers and their unions to accept agreements under the level of any existing law. This means that there is no end to the extent to which labour rights can be undermined in each workplace.”

This alarming prospect explains the intensity of the demonstrations against Loi Travail: workers are determined not to submit to what they consider the almost complete abrogation of their labour rights.

The official response has been massive police repression. Since March, 2,000 people have been arrested, demonstrators attacked with rubber bullets, water cannons and tear gas. Hundreds of protestors were injured during the biggest gathering so far (an estimated 1.3 million people) on June 14 in Paris. The police response made parts of the city look like a war zone.

“The state repression of union demonstrations against the new labour law has been super-violent on a scale that I have never seen before in France,” says Florian, a union activist affiliated with the National Confederation of Labour (CNT), an anarcho-syndicalist union allied with the CGT in protesting the labour reform. (He asked that his last name not be included for fear of reprisal from the French government.)

“For the past four months, in these protests several people have lost their eyes due to rubber bullets fired at them by the police, a man has been put in a coma because the police fired a grenade at him which exploded near his face. These grenades have rubber bullets inside them. Another man was injured by a grenade fired at his spine. Police have also broken into a CNT local office in Lille and destroyed it, arrested its members for protesting, and confiscated files.”

The severity of official repression has been facilitated by the state of emergency declared in November 2015 following terrorist attacks in Paris that killed 130 people. The emergency grants police increased powers to act without judicial consent. House searches can be conducted without warrants at any time and house arrests made. Curfews can be imposed, public movement limited and mass gatherings stopped. Public spaces such as bars and theatres can be closed and media can be censored.

A French state of emergency is only supposed to last for 12 days, but the Hollande government has extended it several times. After the Bastille Day attack in Nice this July, which killed 84 people, the national assembly voted to maintain the state of emergency until January 2017.

“The French government is using the state of emergency to suppress labour rights and human rights in France,” says Richard Wagman, co-founder of France’s New Anticapitalist Party (NPA), which has also been an active participant in the demonstrations. “Since the promulgation of the state of emergency and the massive deployment of police, military and paramilitary forces, there have been practically no arrests of suspected terrorists. The first arrests carried out under the emergency were those of ecologists who were put in jail for protesting against the climate conference in Paris last December.

“Since then,” continues Wagman, “numerous trade unionists, social rights activists, anti-racist organizers, environmentalists and other progressives have been arrested, as the police no longer have to offer the same constitutional guarantees in prosecuting suspects for offences which are often imaginary. When terrorist attacks traumatize the country and police powers are increased, it’s the workers’ movement which is pushed back.”

Under Hollande, France’s military interventions abroad have increased dramatically, with attacks on Libya and Syria, and thousands of troops dispatched to Mali and the Central African Republic. According to Lesage, the terrorist attacks in France can be connected to the Syrian and Libyan campaigns, but “it is also linked to our colonialist history, our Muslim immigrants and the discrimination they suffer.”

Muslims in France are treated “violently” by the police, says Florian, who agrees the roots of terrorism lie in France’s foreign policy, especially its attack on Syria. “France needs to stop creating chaos in the Middle East and selling weapons all over the world if its government wants to end terrorism on its soil,” he says.

France’s largest business lobby—the Movement of the Enterprises of France (MEDEF)—enthusiastically backs the reforms and has long pressured the Socialist Party to lower labour standards in the face of prolonged recession and 10% unemployment. Hollande, who alongside Angela Merkel of Germany pressed Greece and other European countries to impose austerity on workers, was bound to pursue the same agenda at home.

“All EU governments faced with the pressures of globalization are enforcing austerity to reduce the living standards of their workers down to the level of China and India,” says Lesage. “Euro-capitalists now need a state better able to control the waves of public anger unleashed by this destructive process.”

This anger is particularly widespread in France. Hollande came to power four years ago by declaring that his enemy was “high finance.” But he proceeded to serve precisely this sector by enacting unprecedented neoliberal measures against the working class.

This betrayal has created widespread disillusionment with politics in France, leading to the phenomenon of Nuit Debout (“Rise Up All Night”). As part of the labour demonstrations over the summer, thousands of people have occupied public squares overnight to discuss politics and economics, and what kind of society they would prefer to live in.

“The convergence of struggles was the main theme put forth in Nuit Debout,” says Wagman, “bringing together workers and youth from different sectors in democratic, non-hierarchical debates, as well as initiating a number of militant initiatives to support ongoing struggles in different sectors.”

The phenomenon, which was inspired by the 2011 Indignados movement in Spain, has spread to other countries in Europe. “It is a modern form of proletarian internationalism in terms of class consciousness and democratic forms of organization,” Wagman says.

“People are tired of voting for progressive policies and being deceived. They can see that the political system does not work,” says Florian, who attended Nuit Debout in Place de la République, Paris, where the movement began. “When people do not agree with neoliberal measures and make this clear, the government passes these anyway and this is done by a so-called socialist government which keeps lying and working against the public interest.

“Nuit Debout shows that the French people crave politics, but a genuine socialist politics and the creation of a true participatory democracy that benefits everyone and not just the corporate elite. They want to be involved in fashioning such a democracy and refuse to be marginalized and manipulated by the economic elite.”

Hollande has become so unpopular in France that he could not even trust his own party members to vote for the labour reform legislation, which is why he rammed it through the national assembly on July 20. Christian Paul, a deputy in the assembly who leads a dissident faction of the Socialist Party, warned this “would be politically devastating.” He told Prime Minister Manuel Valls in early July that “he risked further alienating left-wing voters if he overrode parliamentary opponents and forced the labour reform bill onto the statute books by decree ahead of legislative and presidential elections in mid-2017.”

While the Socialist Party appears headed for a significant loss in those elections, no formidable alternative exists on the left. The Left Front, a coalition of the Communist Party, Jean-Luc Mélenchon’s Left Party and the Unitarian Left, has only 15 seats in the national assembly out of a total of 577 (the far left is better represented at the regional and departmental level). The major opposition party, with 199 seats currently, are the right-wing Republicans (formerly the Union for a Popular Movement) led by Nicolas Sarkozy, who also drew mass protests in response to labour reform proposals when he was prime minister

Sarkozy has called Hollande’s Loi Travail “far too weak to solve the problems, but stinging enough to arouse the passions of the left. The government has proven its weakness faced with the protests.” (The Republicans are one of several groups challenging the legislation as unconstitutional.) Sarkozy would also prefer that the police had even more leeway to address terrorism. “We must be merciless,” he said at the end of July, “the legal quibbling, precautions and pretexts for insufficient action are not acceptable.”

The CGT has reacted with defiance to the imposition of the labour reform and large demonstrations are planned for September.

"We're going to maintain the climate that we've known for the past four months and are thinking very concretely of other [protests] in the fall," Philippe Martinez, the CGT secretary-general, told the newspaper L’Humanité. "I would remind you that there are laws that have been passed, but never applied."

Asad Ismi is an independent journalist and activist who covers international affairs for the Monitor.

This article was published in the September/October 2016 issue of The Monitor. Click here for more or to download the whole issue.