Home › Publications › The Monitor › Is the future human?

Is the future human?

By transforming us into Smart Citizens, surveillance capitalism threatens our ability to think, act and resist.
Author(s):
Meagan Bell
May 1, 2019 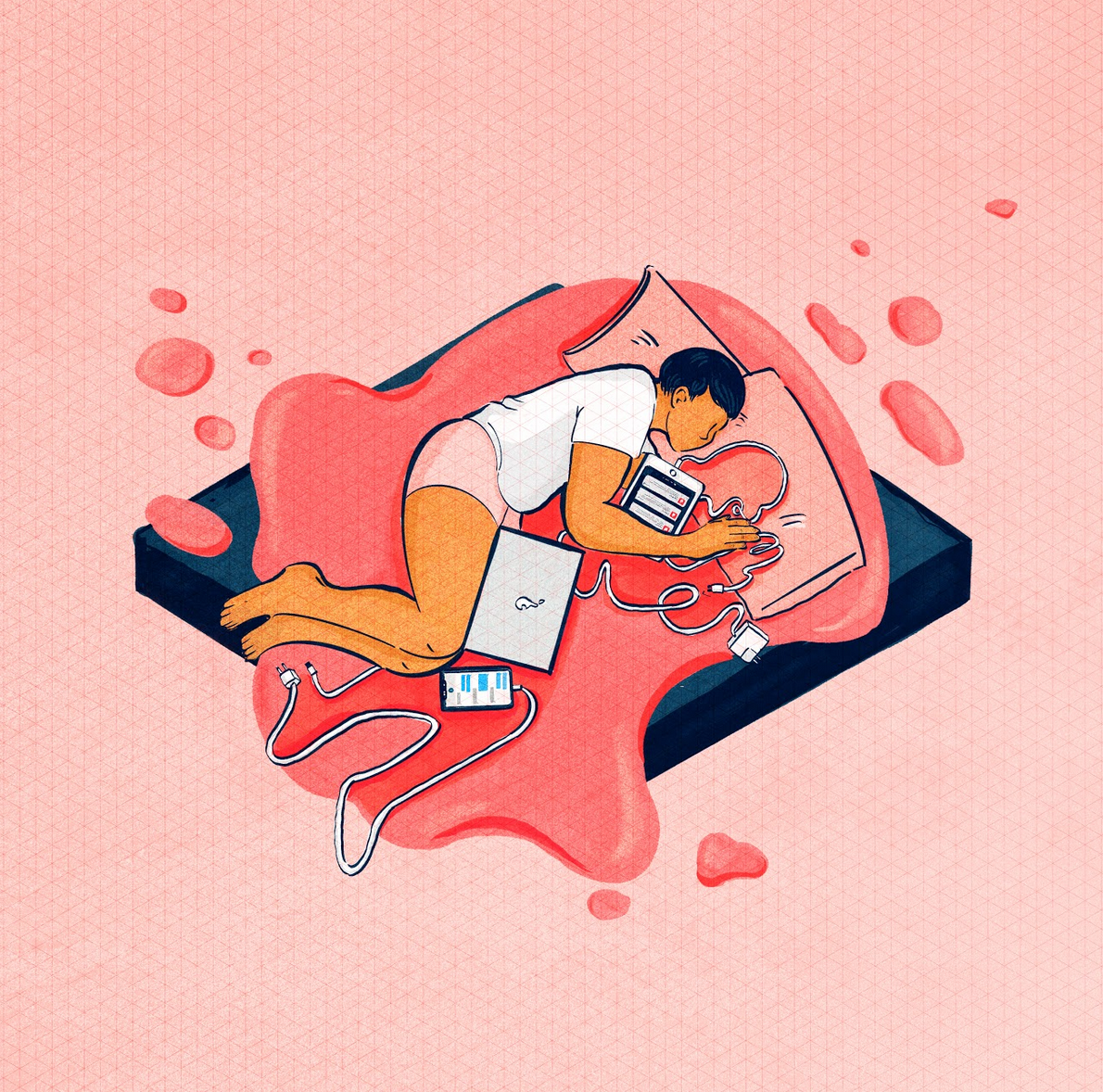 In the age of surveillance capitalism there lives a new type of citizen. Surrounded by tracking chips, sensors, microphones and cameras, the Smart Citizen feels at ease. They are never late for work; the sensors in their beds are sure to wake them on time, with coffee brewing in anticipation. Their devices know everything about them and predict their wishes accordingly. But how much does the Smart Citizen know about their devices? How much can they know?

We are told, in preposterously long terms of service, that smart devices and their applications must record and store information about how and when we use them, in varying combinations or relationships with our other online activities. The companies who offer these products and services are even less clear about what is done with all this fragmentary information about our lives.

When disaggregated, all these bytes of personal data have a limited utility: they tell its possessor practically nothing. But when combined with other little pieces of information from other devices associated with a user or group of users, this behavioral data forms an extremely detailed portrait. This theory of intelligence gathering is aptly known as the “mosaic effect.” In practice, whether at Google or the CIA, thousands of pieces of seemingly innocuous data about past behavior can be complied and fit together to create a shockingly clear portrait of a subject—a mosaic that can be useful for predicting and even modifying future behavior.

In The Age of Surveillance Capitalism, Shoshana Zuboff casts a bright light on the power this seemingly benign data holds over our collective social and political future. Once extracted, analyzed and packaged by corporations, private human experiences become an information-rich commodity called behavioural data. Much like other commodities, our private experiences are then brought into the marketplace to be bought and sold. Zuboff calls this the “behavioural marketplace,” which found its humble beginnings in the early 2000s with Google’s online targeted advertising techniques.

No longer bound by the collection of user clicks and browser data, the behavioural marketplace has swallowed our exercise and eating routines, television show preferences, purchase records, psychological profiles (through insidious Facebook quizzes), political leanings, etc. Almost every economic sector is getting into the market for your data. Through “the internet of things” everyday objects have increasingly become interconnected devices with smart capabilities. Our cars, phones, watches, thermostats, televisions and mattresses all leak deeply predictive information about our lives.

In order to have a meaningful public dialogue and make informed choices about privacy, citizens must have access to information grounded in fact and legal reality. Yet, as Zuboff and many others point out, it’s impossible to know, understand or discuss something that has been crafted in secrecy and designed to be fundamentally illegible. In that way, the ideology demonstrated by surveillance capitalists is postdemocratic. The system is designed to keep us ignorant. Armed with data, companies like Google represent themselves as authorities on our collective future. They know what we cannot know, and they are incentivized to conceal their behaviours and practices.

How do surveillance capitalists get away with this? Why hasn’t the Canadian government strengthened our privacy laws and found ways to regulate the behavioural marketplace to better protect citizens? The Age of Surveillance Capitalism is a story that cannot be told without recognizing the complex relationship between corporate and government entities.

Zuboff offers multiple explanations for how we might have arrived in this dangerous place. In one account, she identifies the attacks on the United States of September 11, 2001 as a cataclysmic moment that marked a turning point in the way governments would interact with these developing corporations.

Following 9/11, governments and intelligence agencies were inclined to “nurture, mimic, shelter, and appropriate surveillance capitalism’s emergent capabilities,” she writes. Government rhetoric concerning privacy protections in both Canada and the United States dramatically shifted to enable and normalize exceptional surveillance practices that could lead to total awareness of alleged threats to the state.

This is not to say that without 9/11 governments and surveillance capitalists might not have found ways to work together. Rather, the attack and response to it marks an immediate and determinate shift in how the Canadian and U.S. governments publically discussed privacy legislation and safeguards for citizens.

Zuboff identifies the neoliberal framing of government regulation as state tyranny as another important factor in the growth of surveillance capitalism. The imperative to not stifle innovative industries enabled a hands-off regulatory regime covering internet and other digital economy companies.

The idea was that, by acting in their own best interests, self-regulating companies would simultaneously benefit their customers/users. It has now become apparent that users in a surveillance-capitalist economy are not like customers seated at the dinner table. They are the meal that’s being served.

In Canada, like in the United States, instead of developing a robust system of privacy regulation with effective oversight bodies, the state has permitted communications corporations to self-regulate. One key method of corporate self-regulation has been the public dissemination of so-called transparency reports.

Pioneered by Google in 2010, the transparency report has become a commonly used tool for telecommunications and internet-based corporations to disclose how often they are compelled to hand over user data to government and law enforcement agencies, or when they have removed content entirely. The transparency report acts as a point of disclosure to reassure users that something is being done to protect their privacy rights. On the other hand, the reports also highlight how frequently that user data is retained by communications corporations and disclosed to governments and law enforcement agencies.

At best, these disclosures give users a sense of the size and scope of government surveillance through the use of warrants, but they are silent on the existence of other methods of interception. As reported by University of Ottawa law professor Michael Geist in 2015, Canadian telecom companies were advising the government that they could build “surveillance ready” networks using equipment from leading telecom equipment manufacturers, including Cisco, Juniper and Huawei.

In a 2013 memo to government quoted by Geist, Canadian providers argue that "the telecommunications market will soon shift to a point where interception capability will simply become a standard component of available equipment, and that technical changes in the way communications actually travel on networks will make it even easier to intercept communications."

At their worst, transparency reports obscure what we can know about government and corporate practices, perpetuating and amplifying a top-down approach to surveillance and behaviour-shaping in which the object of surveillance has little agency to understand and meaningfully challenge these existing inequalities. These reports allow the surveillance capitalists to decline real participation in public discussion, debate or questioning regarding their collection and use of behavioural data.

The German cultural theorist Eva Horn has written, “Power is that which is neither subject to debate, nor forced to justify itself.” By using transparency reports as a key method of self-regulation, surveillance corporations like TELUS, Rogers and Google are able to claim to be acting with transparency while simultaneously exercising their power to remain silent.

The story of the Smart Citizen in the age of surveillance capitalism at times feels nightmarishly complex. Like characters in a Kafka novel, we may wonder if we have entered into a surreal world in which control patterns and the ways we configure our behaviour seem to fall apart. As we struggle to understand and resist the new surveillance capitalism, it becomes apparent the methods we once employed to confront power are perhaps not up to the task, our tools too blunt.

In Canada, a number of activists and academics have begun looking for new modes of understanding and resisting elements of surveillance capitalism that reject cursory prescriptions such as encryption and toggling on/off privacy settings. For citizens/users, it is critical to understand that these issues are not contained within the realm of technology and digital privacy rights. These are political battles in which a great deal is at stake.

For Zuboff, our expectation of sovereignty over our lives, of authorship over our experiences, is deeply threatened by surveillance capitalism’s unchecked exploitation of behavioural data. If that is true, we risk losing both our inward experiences and the public spaces in which to act. The battle, then, is not only over our democracy, but also our right to a human future.

Meagan Bell is a master's student at Carleton University’s Institute of Political Economy where she is researching internet regulation in Canada. She is currently an executive for CUPE 4600, Carleton’s union for teaching assistants and contract instructors.