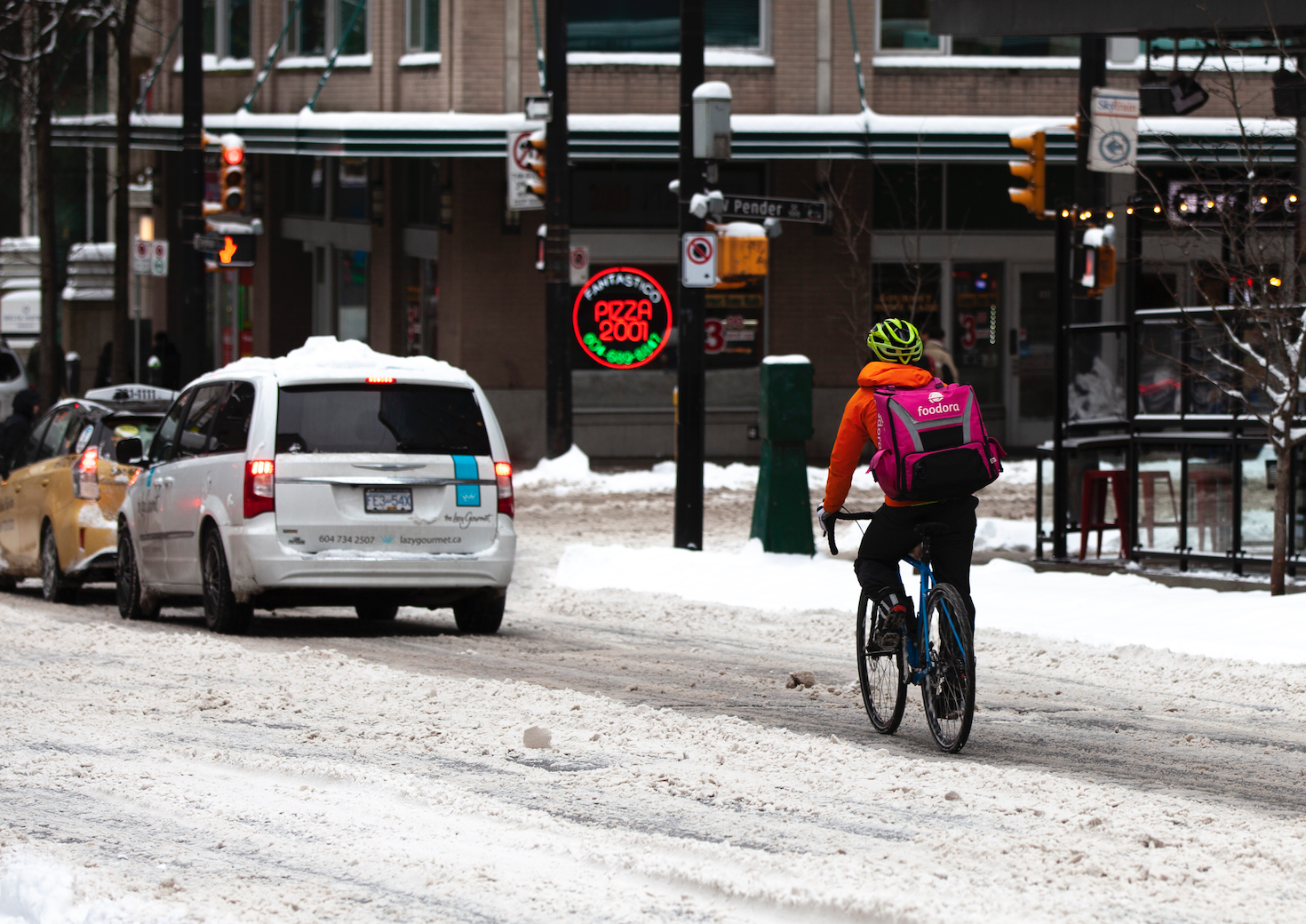 [Editor's note: Foodora, the Berlin-based food delivery app service, announced on April 27 that it is pulling out of Canada, citing "strong competition in the Canadian market." The courrier union Foodsters United responded on Facebook that the company's action "demonstrates a complete disregard for the wellbeing of us workers in an already extreme and uncertain time. Foodora has left restaurant partners, as well as couriers, without significant notice."]

Setting the stage for a potential transformation of the gig economy, Foodora couriers recently won the right to unionize.

In February 2020, the Ontario Labour Relations Board dismissed the food delivery company’s arguments that its delivery couriers are independent contractors. Instead, the board ruled that the couriers are dependent contractors. This is a category of workers who are more like employees and who are allowed to unionize under Ontario’s Labour Relations Act.

“The gig economy as a whole is a scam,” said Alex Kurth, Foodora courier and union organizer, in an interview with the CBC last August. “It's founded upon misclassification of workers in an attempt to shirk basic legal responsibilities and basic workers' rights.”

Indeed, far from sharing the fruits of their labour in the so-called sharing economy, multibillion-dollar corporations like Amazon, Lyft and Uber have argued in courts and tribunals across the world that these workers are independent contractors, and thus not entitled to unionization, living wages, paid sick leave, discipline and termination protections, or unemployment insurance, among other rights and benefits.

In the same CBC story, Foodora spokesperson Sadie Weinstein expressed the concern that unions “could be detrimental to most participants in the gig economy, including newcomers to Canada.” In fact, the above protections are essential for all gig workers, including and particularly low-waged immigrant workers forced into gig work precisely because of systemic barriers to other, more stable forms of employment.

The labour board’s decision to agree with the Canadian Union of Postal Workers that Foodora couriers are dependent contractors was based on a number of interrelated considerations.

Foodora’s Toronto couriers had actually already voted on whether or not to join CUPW before the decision came out. But before their votes could be counted, the board first needed to decide if Ontario’s labour laws allow gig economy workers to cast unionization votes in the first place. The results of the Foodsters’ vote remain outstanding, now pending the board’s determination of other legal issues in dispute. If that vote ultimately proves successful, Foodora couriers could become Canada's first unionized app-based workforce.

Regardless, while this is the first decision from a Canadian labour board about how to classify gig workers, it likely won’t be the last. Since 2018, Amazon has been embroiled in a legal fight with Local 175 of the United Food and Commercial Workers Union Canada about the unionization of its delivery drivers. UFCW Canada, meanwhile, is in the process of organizing Uber Black drivers, and workers at many other app-based workplaces continue to push for recognition as full employees.

Workers and employers at social media platform will be monitoring the repercussions of this case closely. A unionized workforce presents a curtailment on the ability of software companies to exploit vulnerable workers for corporate profit. This exploitation has become especially stark under COVID-19 quarantine.

Over the past two months, people have increasingly turned to food and grocery delivery couriers to avoid infection in crowded stores. Despite that potentially lifesaving function, couriers do not receive sick pay or even protective gear. Besides representing unfair workplace policy, this is also a clear public health failure.

The gig economy is notorious for fracturing the traditional, physical workplace, where workers could naturally congregate, into a nebulous virtual sphere controlled by faceless algorithms. Against those isolationist odds, the Foodsters were nevertheless able to organize each other for what remains a long legal fight. They have been unflagging and have inspired workers at other companies, despite the fact gig economy workers are “dispersed, precarious, and sometimes short-tenured, and they are working in an industry where unions are demonized,” as Ryan White, one of CUPW’s lawyers in this case, noted on Twitter.

Against COVID-19’s shadow, we need to be prepared for at least some of our workplaces to grow even more fissured. With people increasingly physically isolated from each through social distancing directives, the organizing lessons we can learn from the Foodsters about how to build real-world solidarity and trust in an online age are arguably more important than ever.

Fathima Cader is a lawyer, academic and writer, and was co-counsel on the unionization of delivery drivers servicing Amazon in Toronto.