How Canada can tackle gender inequality through trade 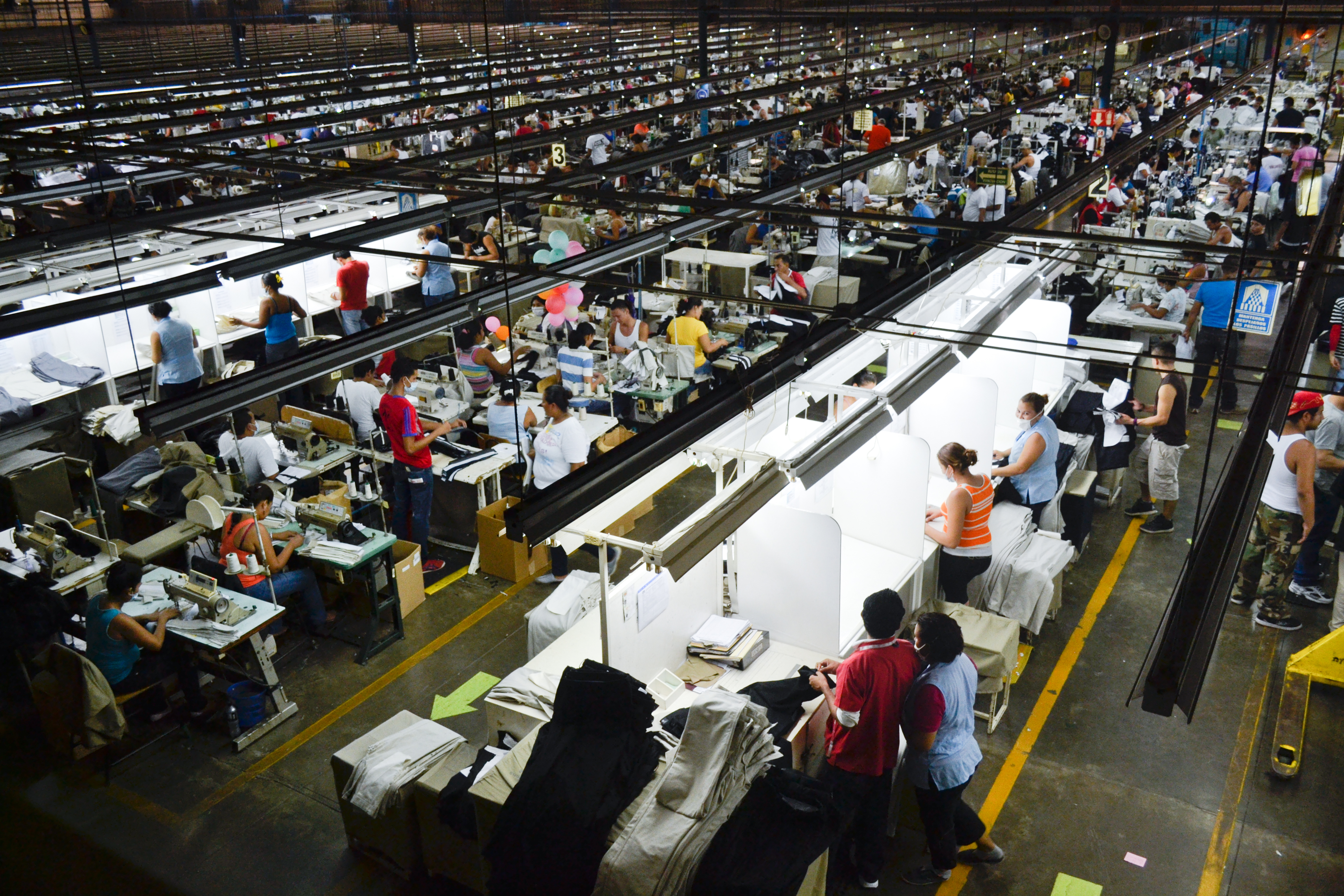 The Trudeau government’s feminist international assistance policy is a bold step forward. But it cannot stop there. Canada’s ambition to be a global champion for women’s rights can only be achieved through a robust feminist foreign policy and unrelenting championing of women’s leadership. This must absolutely include a focus on trade, and a commitment by Canadian trade negotiators to put gender equality at the heart of their work.

In Canada and around the world, gender inequality persists when it comes to access to decent work and wages, and responsibility for unpaid care work. Applying a feminist lens to trade policy is a crucial way to ensure that the benefits of trade are shared more equally with those at the bottom of the economic ladder, the majority of whom are women.

Women in the labour market consistently earn lower wages than men—40% less in some countries—with pay gaps made worse by other forms of discrimination such as race and immigration status. Although 70% of women report a desire to find paid work, the International Labour Organization estimates that more than half are out of the job market. Even when women do find paid employment, they tend to be concentrated in low-wage roles with little job security, and without access to basic rights and protections.

There are obstacles even for those who own their own businesses. Many female entrepreneurs and small-scale producers face particular barriers to seizing trade opportunities. Marginalized women have limited access to resources such as capital, land and credit. They also have difficulty getting the training and technology they require to help grow their companies. This puts them at a huge disadvantage when it comes to marketing their products and getting them to export markets.

Trade can be a tool for poverty reduction, but Oxfam has found that rather than break down these structural inequalities, the liberalization of trade in recent decades has only reinforced inequalities by lining the pockets of big multinational companies predominantly run by men. These deals are often inked without any thought to how they will affect women and men differently, and they all do. If we want to maximize the gains for women, trade rules, agreements and support programs must all address the specific issues that female workers, entrepreneurs and consumers face.

To meaningfully deliver on its feminist promise, the government would need to consider gender in all aspects of its trade agenda. That includes a commitment to protecting women’s labour and human rights, stopping the race to the bottom on tax policy, conducting transparent and inclusive processes, and listening to the voices of women’s rights organizations. Here is how Oxfam believes this can be done.

Apply a gender lens across all trade agreements and programs

A dedicated stand-alone chapter sets an important precedent by acknowledging the gendered impacts of trade. Women’s rights activists have produced much evidence on this, but it is rare that specific language on gender equality is actually incorporated into trade agreements. That being said, a closer look at the Canada–Chile gender chapter reveals that it is not tied to a particular timeline, goal or indicator that would allow us to measure whether it is actually making a difference. It also focuses primarily on supporting women so they can benefit from trade, while doing little to recognize the potential harmful impacts of free trade on their rights.

The chapter holds Canada and Chile to their existing commitments on gender equality, referencing the Convention on the Elimination of all Forms of Discrimination Against Women (CEDAW) and the Sustainable Development Goals (SDGs). However, it lacks any ex ante analysis of how the trade deal as a whole will affect those commitments. How might the deal impact different groups of women specifically? How will it impact women’s unpaid care work responsibilities, violence against women and female leadership? These are core components of SDG number 5 on gender equality, for which women’s rights movements fought hard.

The chapter sets up a committee to lead on gender and trade initiatives between the two countries, such as building women’s networks, improving labour standards, and supporting the specific needs of women to help them take advantage of the agreement. While it is great to have a dedicated group of people looking at the issues and moving things forward, the committee needs to have a strong mandate and resources behind it to be effective. Ensuring representation of women’s rights organizations, labour movements and leaders will help keep their concerns on the table.

A key weakness of the gender chapter is that activities remain entirely voluntary, and it is not clear what success would look like or how it will be measured. The chapter could be strengthened by adding concrete requirements to keep parties accountable. At a minimum, both countries should be required to conduct a poverty and social impact analysis (PSIA) or a gender trade impact assessment (GTIA) to explore the possible gendered impacts. This analysis could lead to a better understanding of where the needs are, and whether gender equality gains are being achieved through the agreement. The findings could guide the gender committee in its activities, but members should also have the authority to make recommendations for the wider trading relationship and how it can support gender equality. Keeping gender equality in a silo with no impact over the rest of the policy is not going to be effective.

Over time, the government’s goal should be to develop provisions on gender equality in all trade deals that are binding and subject to a dispute settlement process, to give women recourse if they have been negatively impacted. It is also worth noting that the government continues to implement agreements that do not have specific provisions on gender equality, such as the Comprehensive Economic and Trade Agreement (CETA) between Canada and the European Union. Strong leadership will be needed to ensure gender issues are addressed in these trade relationships as well.

Commit to transparency and include women’s rights organizations in talks

In the past, trade negotiations have been criticized for their lack of transparency and limited opportunity for civil society and labour groups, who are often shut out or their recommendations discarded. Under the previous federal government, the international trade committee produced two reports on CETA without even mentioning gender, and less than a fifth of witnesses in the committee’s study were women. Even when women’s voices are taken into consideration, it’s often only the concerns of female business owners; rarely does the government consider a feminist take on overall macroeconomic policy.

Improving the representation of women and gender equality experts in meaningful consultations would help achieve the Liberal government’s stated objective of making trade deals progressive. For example, the government could ensure that a women’s rights expert is included in all committee consultations, and bring together stakeholders to discuss a shared approach to gender equality in trade.

Supporting and funding women’s rights organizations that advocate for fairer trade and economic policies would contribute importantly to the development of a feminist foreign policy. A study by the African Women’s Development and Communication Network in five African countries concluded that increasing partnerships between governments and women’s groups that analyze and advocate for gender-based analysis was a key to ensuring trade deals were gender sensitive.

For trade deals to really address gender inequality, they must look beyond simply integrating women into existing economic opportunities and address the various ways trade policies create and maintain inequality. While the liberalization of trade has brought more women into paid employment, particularly in developing countries, too often these jobs are precarious and underpaid.

From hotel housekeeping to garment production, Oxfam has found that women are concentrated in industries with low pay and exploitative working conditions. Countries that use export-led growth strategies need to compete in a globalized market by offering cheap labour, usually provided by women who have lower bargaining power and status. For example, in Mexico women make up the majority of workers in the maquilas (manufacturing centres frequently on or not far from the U.S. border) where labour rights abuses are well documented.

Women also experience work in different ways and need specific measures to ensure that jobs are actually empowering, such as non-discrimination on the basis of gender and flexible parental leave provisions. Addressing labour rights in trade policy is therefore a key feminist issue. Canada should ensure that labour provisions it proposes in trade agreements are analyzed from a gender perspective, and that specific measures are put forward to address women’s labour rights. Labour chapters should include binding language that specifies commitments to address gender inequality in labour markets, including pay equity and access to decent work. Canada should also propose strong language on non-discrimination, gender-based violence at work, child care, and parental and flexible leave.

Policy-makers must also pay special attention to the power dynamic created by trade deals. Investor-state dispute settlement (ISDS) mechanisms in these agreements have given corporations more power than workers and individuals. Companies can sue governments for implementing policies that infringe on their profits, but those they employ have no such recourse if they are made worse off. Governments, including Canada’s, must ensure that their duty to protect and promote women’s rights is not curtailed through trade policy, and be prepared to carve out or shield human and environmental rights from ISDS to protect the public interest. That includes safeguarding investments in public services that benefit disadvantaged workers.

Stop the race to the bottom of the tax ladder

Though corporate tax rates remain at all-time lows in Canada, trade negotiators are always looking for ways to lower costs for business. For many governments around the world, that often involves the removal or lowering of tariffs to attract new investments. Countries focused on export-led growth often offer tax breaks for companies operating in export processing zones to stay competitive. These policies reduce the costs of international trade and production for companies, making it easier to manufacture and sell cheaper goods. However, they also reduce the revenue collected by governments.

This lost tax revenue means less investment in public services such as health care, education and child care, which are crucial for gender equality and women’s rights. Without these services, women often end up filling in the gaps with higher loads of unpaid care work, which impedes their ability to access full-time paid employment. Women in developing countries are particularly affected by this trend of decreased investments in public services.

Governments often try to make up the shortfall in public revenue through regressive tax measures, such as  consumption taxes. These measures disproportionately impact the poorest people in society who end up paying a higher percentage of their income in tax. Because women are concentrated in these lower-income groups and are responsible for a higher proportion of household spending, they are hit hardest by these regressive tax policies.

When pursuing future trade deals, Canadian negotiators should be mindful that their efforts to get a better deal for business do not come at the expense of services for hard-working women living in poverty.

The Trudeau government says it wants to pursue a different kind of trade agenda, with Minister Freeland stating “We believe in progressive trade that works for working people.” In order to achieve this vision, Canada must put gender equality and human rights at the heart of its mandates for new trade and investment agreements while addressing the unequal power dynamics that free trade deals create.

It’s also high time corporations took responsibility for ensuring that workers—and women in particular—are not made worse off by their dogged pursuit of profits. That is what inclusive growth is really all about.

This article was published in the November/December 2017 issue of The Monitor. Click here for more or to download the whole issue.