Home › Publications › The Monitor › How Canada gets people tortured

How Canada gets people tortured 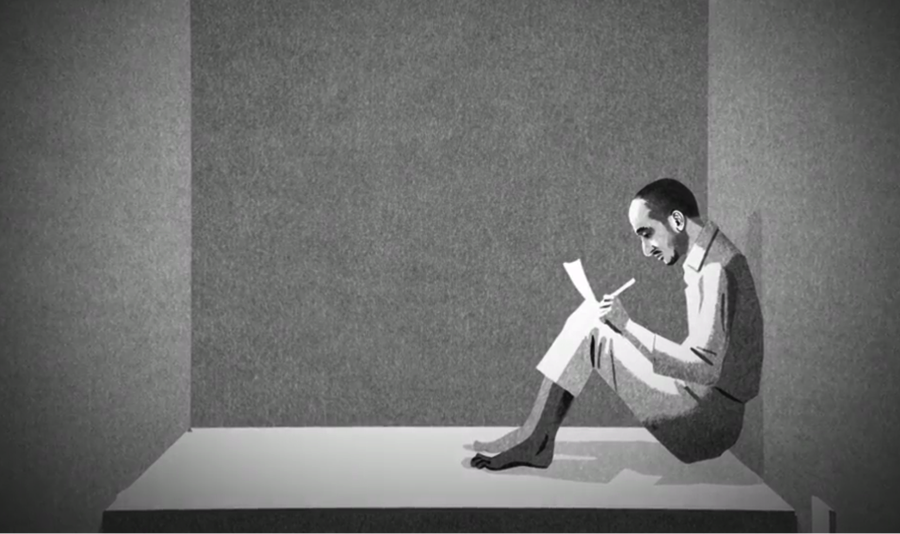 Screenshot from a short film about Guantánamo Diary (see http://guantanamodiary.com/).

Following December’s release of the U.S. Senate report on American complicity in torture, Prime Minister Stephen Harper quickly declared, “It has nothing to do whatsoever with the government of Canada.” Despite the CIA’s close relationship with Canadian state security agencies, as well as two judicial inquiries finding Ottawa complicit in the torture of Canadian citizens in Syria and Egypt, Harper preferred to ignore the facts.

At about the same time, a stunning memoir was published that paints another damning portrait of Canadian authorities from even before September 11, 2001. Guantanamo Diary was originally composed by hand in 2005 from a cell at the infamous U.S. torture camp, which remains open despite President Obama’s promise to close it eight years ago. It tells the remarkable story of Mohamedou Ould Slahi, a Mauritanian national who remains detained there despite a 2010 U.S. release order.

In English learned by listening to his kidnappers and torturers, Slahi elegantly relates a tale of human resilience under the most appalling conditions. His book is filled with wisdom, humour, and heartbreaking moments of despair produced by unending months of round-the-clock torture. The memoir would have been available sooner had it not been classified secret and subjected to a six-year legal battle over its release. It contains an incredible number of redactions, from single words to whole pages. But in a remarkable comment on the cultural shift, where today torture is almost accepted as reasonable and inevitable, most of the sections detailing his brutalization appear intact.

Slahi’s troubles began in Montreal, in 2000, where, after 12 years in Germany, he lived as a Canadian permanent resident for just over two months. At the time, he was subject to an RCMP/CSIS “disruption” campaign of harassment. Two cameras were implanted in the wall of his Montreal room, and he was followed in an obvious manner, “to give the message that we are watching you.”

Slahi’s very first interrogation was at the hands of the RCMP. He describes being “scared to hell” as he was questioned about a fellow Montrealer he’d never met. The police wanted information on Ahmed Ressam, who was eventually convicted in the U.S. for planning to bomb the Los Angeles International Airport

Flying home around this time, Slahi was intercepted and twice detained at the behest of U.S. officials, first in Senegal and then when he arrived in Mauritania, where he was repeatedly interrogated about alleged involvement in Ressam’s so-called Millennium Plot. Slahi was released in February of 2000 then arrested again in September 2001, questioned, cleared, and released.

In one of the earlier Mauritanian interrogations, Slahi recalled that things seemed to be going smoothly, “but when they opened the Canadian file, things soured decidedly.” His case illustrates how Canadian state agencies were participating in the U.S.-led rendition-to-torture program at least 20 months before 9/11, which contradicts CSIS and RCMP claims that similar human rights violations they committed in 2002 and 2003 were mistakes resulting from confusion and fear after the U.S. attacks. This was all, it appears, standard operating procedure for Canada’s security agencies.

Indeed, readers familiar with Canadian human rights abuses against Arab Muslims will recognize in Slahi’s memoir a similar pattern that reveals the dangers of “information sharing” with foreign governments, “intelligence” data dumps that are full of inflammatory and false allegations, “co-operation” with secret police, and using the fruits of torture.

Slahi’s decision to voluntarily show up for another round of Mauritanian police questioning in November 2001 led to his self-described rendition world tour. It hit Jordan, Afghanistan, and Guantanamo Bay, Cuba, the human hellhole reserved for “the worst of the worst.” By the time Slahi arrived at the U.S. base, in 2002, the Los Angeles Times was reporting that Guantanamo contained “no big fish,” but hundreds of innocents who had been turned in by Afghan bounty hunters seeking rewards from Americans who paid good money and never confirmed the truthfulness of the hunters’ allegations.

Indeed, as Associated Press reported in 2013, there were ongoing efforts between 2002 and 2005 to recruit Gitmo detainees as spies and double agents. Slahi himself describes a facility where intelligence agents came from around the world, including Canada, to interrogate their “nationals” or refugees who had escaped their clutches.

The basis for suspecting Slahi appears to be twofold. First, in the eyes of the U.S. administration of the day, he fit the profile of an alleged threat because be fought against the Soviets in Afghanistan in 1991-92 with a little-known, U.S.-funded group called Al Qaeda. The second factor is that, although Slahi left Al Qaeda in 1992, a distant cousin, Abu Hafs, became a member of the group’s shura council. Opposing the 9/11 attacks, Abu Hafs served some time under Iranian house arrest and is now a free man.

But with those two links providing little traction, it appears the sole basis for Slahi’s eventual detention is the alleged Millennium Plot connection, even though the plot’s singular member, Ressam, never implicated Slahi when he freely cooperated with U.S. authorities (and later recanted about those he did try to implicate). Remember that Canadian security agencies notoriously lost track of Ressam, who was only caught because of an attentive U.S. border guard.

“Canadian intelligence wishes I were a criminal, so they could make up for their failure when [NAME REDACTED, but clearly Ressam] slipped from their country to the U.S. carrying explosives,” Slahi writes in his diary. “The U.S. blamed Canada for being a preparation ground for terrorist attacks against the U.S., and that’s why Canadians (sic) Intels freaked out. They really lost their composure, trying everything to calm the rage of their big brother, the U.S. They began watching the people they believed to be bad, including me.”

As in most cases of Canadian targeting and profiling over the past two decades, Slahi was presumed guilty by association, no matter how many degrees of separation there were between him and anyone looking to allegedly plot a terror attack. Mirroring the experience of Ottawa’s Maher Arar, who was the subject of a massive data dump of inflammatory falsehoods that, when shared with the Americans, led to his being branded a threat and a target for Syrian torture, Slahi writes: “I stayed less than two months in Canada, and yet the Americans claimed that the Canadians provided tons of information. The Canadians don’t even know me!” Notably, the Germans provided nothing towards Slahi’s interrogations.

Without providing the full conversations, which Slahi believes Canada should have refused anyhow, there is no opportunity to provide context, and so the Americans fixated on what they believed to be code words in his phone calls: “tea” and “sugar.”

One interrogator tells Slahi “your only problem is your time in Canada. If you really haven’t done anything in Canada, you don’t belong in jail.” He is also interrogated by one of the men who interrogated Canadian teenager Omar Khadr after the youngster had been “softened up” by weeks of torture.

The Canadian Slahi file must be bulging with references to Canadians who may have unwittingly suffered surveillance, interrogation, and detention. To cite one of many possible examples, Slahi agreed that he planned to blow up Toronto’s CN Tower, even though he had no clue what it was. (He describes writing out over 1,000 pages of false confessions to try and end the torture at Gitmo.)

Did this “confession” lead to RCMP/CSIS targeting of Canadian Kassim Mohamed after he took photos of the landmark to share with his five children, then living in Egypt? That targeting certainly caused Mohamed’s harrowing two-week detention in Egyptian custody during a 2004 family visit. How many other people in Canada had cases built around such tortured confessions?

“Whenever they asked me about somebody in Canada I had some incriminating information about that person even if I didn’t know him,” writes Slahi, noting that use of the phrases “I don’t know” or “I don’t remember” only invited more torture. Threatened with being disappeared forever, he “took the pen and paper and wrote all kinds of incriminating lies about a poor person who was just seeking refuge in Canada and trying to make some money so he could start a family. Moreover, he is handicapped.” Slahi feels horrible, taking solace that “I didn’t hurt anybody as much as I did myself [and] that I had no choice [and] I was confident that injustice will be defeated.”

The torturous act of “confession” about things and people he knows nothing about was the culmination of endless rounds of sleep deprivation, sexual assault, beatings, immersion in severe cold, humiliation, degradation, and a starvation diet. The psychological war—informing Slahi his mother is detained at Gitmo and likely to be violated in the all-male environment—is all-pervasive, but throughout he maintains a combination of defiance (refusing to speak or throwing snarky replies at his interrogators) and spirituality, even though he is forbidden to pray and punished when he tries to do so. “I hate torture so much,” he writes, but adds that waiting for torture is worse than torture itself.

Remarkably, Slahi maintains a sense of ironic humour, comparing his huge number of interrogations to the list of women Charlie Sheen has dated, and likening the repetitive nature of interrogation to the Hollywood film Groundhog Day. He develops relationships with his guards, debating religion and popular culture. One guard cries shamefully when he leaves Guantanamo, believing that he will go to hell because he prevented Slahi from praying. Others have him fix their VCRs and PCs. Slahi’s ocean of tears is one day interrupted with paroxysms of laughter when he reads The Catcher in the Rye—“such a funny book,” he writes.

Slahi estimates that over six years he spoke to more than 100 different interrogators, including Canadian agents. “You know that I know that you know that I have done nothing,” he tells one American. “You’re holding me because your country is strong enough to be unjust. And it’s not the first time you have kidnapped Africans and enslaved them.”

Is Slahi still at Gitmo, 13 years after being dumped there, because Canadian intelligence agencies don’t want him released? Could holding him be quid pro quo for Canada accepting Omar Khadr and taking that public relations nightmare off U.S. hands?

Unfortunately, Slahi’s request for disclosure of his RCMP/CSIS files, as well as the notes from Canada’s Gitmo interrogations, was turned down when a Federal Court judge ruled that the Charter of Rights and Freedoms did not protect him, even though Slahi’s nightmare began because of two months in Canada. The Supreme Court of Canada refused to hear Slahi’s subsequent appeal to find out what Canada actually has on him, if anything.

Canadians wondering what the future will look like with passage of new anti-terrorism legislation (Bill C-51) have another frightening roadmap with Slahi’s must-read memoir.