Home › Publications › The Monitor › Labour unions in the 21st century?

Labour unions in the 21st century?

The preservation of past experience in cultural memory too often fails to stick, with serious social consequences. Without an adequate understanding of the past we are bound to misunderstand the present. And misunderstanding the present hampers our ability to realize future goals. But can we forget something we did not sufficiently understand in the first place?

The legitimacy of North American labour unions is being called into question. Surveying the continental scene, we find conservative politicians in multiple jurisdictions attacking union security. But as the most recent Ontario election results suggest, the Tim Hudak-style attack on organized labour can easily backfire. Here’s why: despite all the anti-union rhetoric these days, unions and collective bargaining are a crucial ingredient in in the formation and maintenance of a shared prosperity.

In Alberta, Bill 45 criminalizes the very threat of a strike, simultaneously undermining freedom of association and speech. In Saskatchewan and Ontario, Premier Brad Wall and the aforementioned former Progressive Conservative leader Hudak indicated their desire to shred the Rand Formula—mandatory union dues to avoid free riding on union benefits—despite recently backing off such an extreme position. In Newfoundland and Labrador, Bill 22 terminated card-based certification. The Harper government’s Bill C-525 also eliminated card-based certification, thus opening the door to de-unionization in federally regulated industries such as telecommunications, railways and airlines.

The recent move by Republican state governors Scott Walker and Rick Snyder to outlaw collective bargaining in Wisconsin and Michigan is particularly perverse, since it comes on the heels of a Wall Street-induced global financial crisis. Instead of reining in the recklessness of financial speculators, opportunistic politicians in the former heartland of the U.S. labour movement have scapegoated organized labour.

While many opponents of the labour movement readily concede that unions played an important historical role in elevating the conditions and compensation of work, their concession is invariably followed by the assertion that today’s unions are an impediment to economic progress. Is this true?

Average hourly earnings, adjusted for inflation, are a good approximation for the level of social prosperity and for the ‘health’ of the middle class. Over the past century this metric has more than quadrupled in Canada, though the rate of growth has varied dramatically from one period to the next. How do we account for the level and pattern of wage growth?

Orthodox ‘neoclassical’ economics argues that the market for labour is like other commodity markets insofar as the price of labour—the wage rate—is determined by the demand for, and supply of, labour. These ‘market forces’ govern short-term fluctuations in wages. In the long run, the ‘absolute’ wage rate and the national wage bill reflect the productivity of labour, such that the income fetched by a particular labourer and the share of national income going to workers as a whole are shaped by the share of output attributable to the given ‘input.’

In a competitive labour market, says neoclassical orthodoxy, people get their due. Whether one earns $10 per hour or $10 million annually, each level of remuneration reflects proportional productive contribution. The free market outcome is both efficient and fair. Despite the near universal acceptance of this set of claims by professional economists, the historical facts tell a different story.

A second reason for assuming a causal relationship between density and hourly earnings is the relationship between the rates of change of each variable. Comparing the absolute difference in union density with the rate of change of inflation-adjusted average hourly earnings, with both series smoothed as a ten-year moving average to capture the cyclically-adjusted or ‘secular’ trend, yields a correlation of 0.52 over nine decades. This is quite strong given the breadth and duration of the two series.

The national wage bill began to trend upward after 1930, peaked in 1977, two years after the level of unionization peaked, and then trended sharply downward over the past three decades. The two series—wage bill and union density—have a correlation coefficient of 0.78 over the past century, which is statistically significant. It isn’t a historical accident that average hourly compensation stagnated and the national wage bill declined from the mid-1970s onward. The main driver of a shared prosperity—unionization—declined after 1975. The decline of unions since the late 1970s has been associated with the stagnation of hourly compensation, and if hourly earnings do not increase then the gains from growth go elsewhere. Hence the shrinking national wage bill. The fact that the proportion of national income going to the working and middle classes closely tracks union density strongly suggests that density is a causal element.

Some might cast doubt on the generalizability of the Canadian experience and hence on the validity of the claim that unionization has a middle-class forming and income inequality-reducing property. If the U.S. wage bill were to track U.S. union density, this fact would lend considerable weight to the argument that unions have redistributive effects. 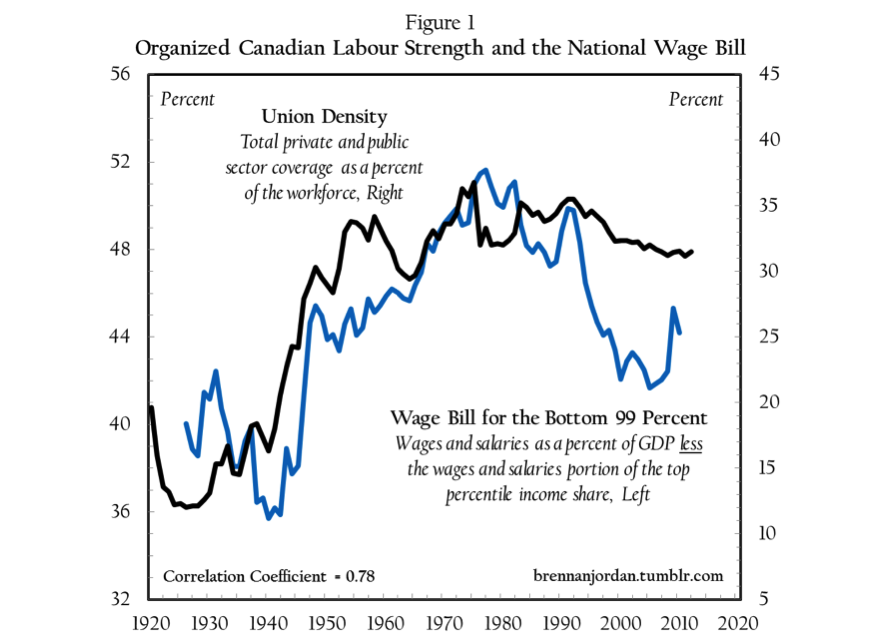 The fourth reason for supposing a causal relationship between the strength of organized labour (as manifest in union density) and labour compensation is captured by the facts in Figure 2, which contrast union density in the United States with an adjusted U.S. national wage bill from 1929 to 2012. The adjusted national wage bill for the United States is measured as wages and salaries plus supplementary labour income as a percent of GDP less the wages and salaries portion of the top percentile income share. Density is measured as union membership as a percent of employed workers.

The two series in Figure 2 are even more tightly correlated than those in Figure 1. In the decades when U.S. labour unions were growing, the national wage bill tended to increase. Absolute union membership and the wage bill for the bottom 99% of the U.S. workforce both peaked in the 1970s and trended sharply downward in recent decades (and show no sign of stabilizing). Note: both density and the adjusted wage bill are higher in Canada than in the United States, which is consistent with the notion that the strength of labour unions increases the share of national income going to the working and middle classes (even though the trend in both countries is similar). 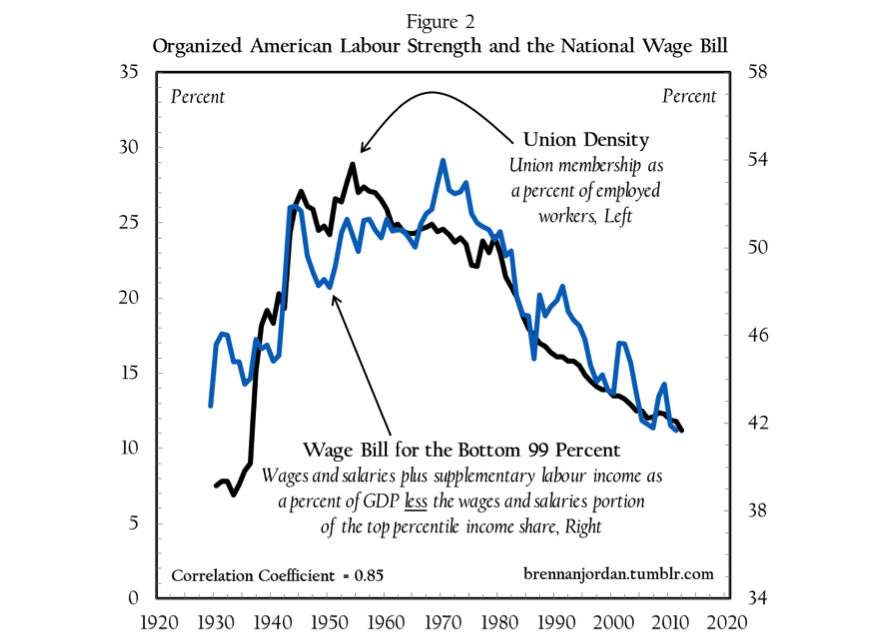 While union density has an absolute floor, namely zero, the national wage bill is a more flexible measure. Classical political economists like David Ricardo and Karl Marx argued that working class incomes would trend towards subsistence levels. The floor below which labour income could not be pushed any farther was the income required to replenish the working class as a whole. The influence of the subsistence theory of wages tended to wane in the 20th century. But as the facts in Figure 2 suggest, in the absence of strong and growing unions, the overall share of national income flowing to employees will trend downward, i.e. towards the culturally determined subsistence level.

The adjusted U.S. wage bill peaked at 54% in 1970 and as of 2012 had fallen to 42%— the lowest level on historic record. In other words, the U.S. working and middle classes have never received a smaller proportion of the national income they work to create since record keeping of this kind began. The systematic weakening of U.S. labour unions seems to play a causal role in the decline of a shared prosperity in the United States.

The Great Recession of 2008–09 provided the opening to contest the validity of neoclassical economics, which since the fall of the Berlin Wall had thought of itself as an eternally valid understanding of human society. The Occupy Movement then made income inequality a pressing political issue. Thomas Piketty’s bestselling Capital in the Twenty-First Century is one of the outcomes of this political-economic shift. There has been plenty of political chatter about middle class stagnation amidst the rise of the ‘One Per Cent.’ Looming in the background of this narrative is declining unionization.

Using econometric techniques we can determine what impact a change in unionization has on the national wage bill and hence on average annual per person earnings. It turns out that for every percentage point change in Canadian unionization (up or down) the average income of the bottom 99% of Canadian workers is adjusted by nearly $500. This implies that if unionization were to be halved from its current level, falling from 32% to 16%, resulting perhaps from a dramatic change in labour laws of the kind proposed by conservative politicians in multiple jurisdictions, average incomes for the bottom 99% of the workforce would decline from $48,062 to $40,560—a 16% reduction.

Why? As the ranks of organized labour swell and collective bargaining pushes up labour compensation, corporate earnings margins are squeezed and the corporate profit share of national income is reduced, leaving less firm revenue for executive compensation and dividends. Weaker unions, by contrast, translate into stagnant wages and provide the opening for increased executive compensation, plush dividends and heightened inequality.

The importance of strong unions for societal well-being is not confined to Canada. Ironically, much of the top scholarship in the field is being driven by researchers in U.S. universities, despite the barely detectable presence of unions in the U.S. political economy.

U.S. scholars have found that higher rates of state-level unionization help reduce working poverty in unionized and non-unionized households and that the effects of unionization are larger than macro performance and social policies in those states. Research shows that the decline of U.S. unions between 1973 and 2007 explains one-fifth to one-third of the growth in U.S. wage inequality—a magnitude comparable to the growing stratification of wages by education. A 2010 study used data from 14,000 respondents in 14 countries and found that life satisfaction is directly related to the level of unionization and that union members report higher life satisfaction than non-union members.

Given the foregoing, ‘unionization’ provides an answer to two questions: ‘What drives income inequality?’ and ‘What can we do about it?’

Union renewal will be difficult in the current political climate, given the hostility governments currently express to the very idea of collective bargaining. The optimistic assessment is that governments are attacking unions despite the fact that unions play a progressive role in middle class formation. The more cynical assessment is that governments are attacking unions (cheered on by factions in the corporate sector) because they understand the role that unions play in building a shared prosperity.

In either case, if unions are going to continue their historic role as elevators of working conditions and lifters of living standards, governments must cease their attacks. But the absence of government hostility will not be enough for unions to flourish in the future. Instead, a supportive policy environment where union security is not only tolerated but nurtured is a crucial ingredient in union renewal.

Canadians built that squishy social entity known as the ‘middle class’ in the decades between 1940 and 1980. The security and comfort associated with Canadian citizenship was not a gift from the gods nor was it bequeathed by enlightened capitalists. We do a disservice to tradition and to truth by failing to recognize the role labour unions play in generating and sustaining mass prosperity.

Jordan Brennan works as an economist for Unifor, Canada’s largest private-sector union. He is the author of the CCPA study, The Creation of a Shared Prosperity in Canada, which develops this argument in greater detail and is available at www.policyalternatives.ca.