Home › Publications › The Monitor › Less on their Plate

Less on their Plate

"The Federal Reserve has done, and will continue to do, everything possible within the limits of its authority to assist in restoring our nation to financial stability…"

It took us far too long to realize the connections between the actions of the U.S. Federal Reserve to the riots in Yemen and Tunisia, and between the immense political gift to Canada’s richest people and the food crisis facing our poorest residents. It goes something like this:

Once the supply chain accordion unwinds, look out below!

We are now in this curious period where we know why a phenomenon has occurred. We all understand the crash and how central bankers have temporarily reversed its effects. We just don’t seem to understand exactly how it is affecting people living in poverty in Canada.

But we can understand much more about what is happening to Canada’s very poor by looking at what has been going on in Ontario through the lens of welfare rates, inflation, and the infamous welfare diet for single persons devised by the Harris government in 1995.

Two years ago, I found a copy of the public letter from Social Services Minister Dave Tsubouchi to Bob Rae from October 1995 and have shopped the attached welfare diet several times at my local superstore, along with a “no holds barred” power shop at my local “no frills” store.

More about that later.

The Welfare Diet of 1995, introduced by then Minister of Social Services Dave Tsubouchi, is a useful tool to measure the changes of the cost of food since 1995. It is not a good diet in its own right. The Toronto Star noted, “Back in 1995, the opposition Liberals scorned the Mike Harris government's ‘welfare diet,’ which purported to show that a single person on social assistance could eat for $90 a month… That meagre Tory shopping list… included pasta but no sauce, and bread but no butter…”

In dollar terms, the chart below shows that, with accelerating food price inflation, fast increases are taking place. The welfare diet increased by $8.43 in just the first four months of 2011. In contrast, Budget 2011 in Ontario announced a 1% social assistance rate increase, an amount less than core inflation, let alone “all items” inflation. The single welfare rate in 1993, had it been adjusted for inflation, would now stand at $932 a month, yet currently sits at only $592. It would take a 63% increase to keep pace with 1993 — and that’s based on the lowly CPI. 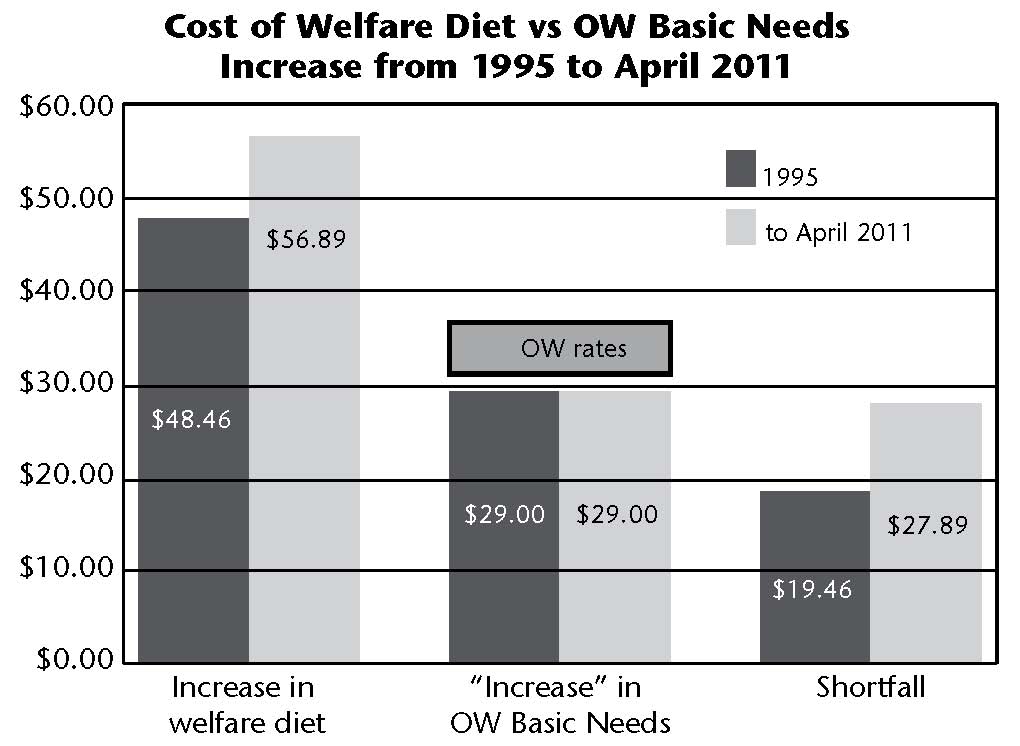 It is sometimes said that “the poor eat calories, the middle class eats nutrition, and the rich eat presentation.” If we leave presentation out of the conversation for the moment, we could conclude that the poor eat less nutritional food because they can’t afford it. There is likely some truth in that, but fresh fruit and produce have been going up in price less rapidly than food with high caloric content.

On the face of it, it appears that the poor could eat better food because it is cheaper. But we know that they don’t. Some attribute this to the unavailability of good food in local convenience stores and fresh produce, fruit and fish that are only available at larger grocery stores that are inconveniently located and often require a car to access. Many claim that food deserts — areas where supermarkets are at more than 1.25 km from where people reside — also makes it difficult to eat higher quality foods.

But the food desert argument is controversial. Some claim distance from shopping is not a factor in consuming good food, and there is little evidence to prove that food deserts, to the extent they exist, have any effect on what foods poor people consume.

Another argument surrounds what I call the “big four” — safe, secure, and energy-efficient storage; cooking, freezing, and refrigeration facilities. Produce, fruit and fish spoil fast and, without access to the big four, it is difficult for the poor to consume these elements of a healthy diet. Seldom do persons living in poverty have access to secure storage, consistent and safe refrigeration, appropriate freezing space, and oven, microwaving and stovetop cooking. When they do (as can be the case in subsidized housing), utilities are often overly expensive.

Still others claim that the real problem is food education, or what is sometimes called “food literacy.” The theory is that the poor are less adept at “cooking from scratch” (as our mothers called it) and, insofar as cooking from scratch is usually cheaper and better than “throwing” prepared and processed foods in a microwave, the poor are destined to buy more expensive food that is less nutritious, and containing more of the preservatives like sodium and nitrates that are bad for us.

It is likely that all we can conclude without debate is that the poor consume less of the food groups that are harder to preserve and store and most of which require — with the exception of fruits and raw vegetables — some measure of preparation requiring adequate cooking facilities.

Supply-managed foods like milk, bread, and meat have been going up in price higher than the rate of inflation for some time. There are many reasons for this phenomenon, but it is important to note that bread, milk, and meat are easier for the poor to buy and consume. They can be frozen easily, they be can be consumed without preparation (except for uncooked meats), and each can be processed in ways that allow for easier, refrigeration-free storage. Going stale is definitely different from going bad. One you can eat — the other you can’t.

The Poor and Inflation 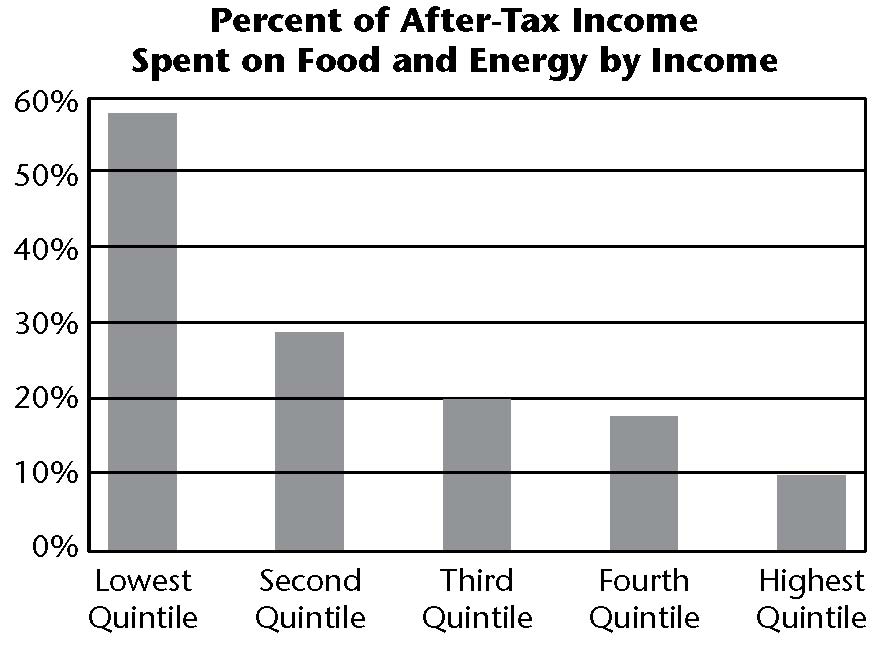 The poor often buy the most expensive, “easy to store” foods, and they are hit by the double whammy that the hardest to store foods tend to come from the cheapest food groups. Now let’s take a look at inflation as measured by the Consumer Price Index or CPI.

In the CPI release that comes out from Statistics Canada each month, there is a disclaimer in the top right-hand corner of the release. Each month, it reads as follows:

“The Bank of Canada’s core index excludes eight of the Consumer Price Index’s most volatile components (fruit, fruit preparations and nuts; vegetables and vegetable preparations; mortgage interest cost; natural gas; heating oil and other fuels; gasoline; inter-city transportation; and tobacco products and smokers’ supplies) as well as the effects of changes in indirect taxes on the remaining components.”

The problem is that commodities, especially over the last two years, have not been volatile at all. Volatility presupposes that something goes up and down in erratic ways. The reality for commodities over the last two years — as a group — is that, with the exception of a small pullback in April 2011, they have simply gone straight up. Between 2009 and 2011, commodity prices doubled.

With no recognition of this fact in core CPI, we have the curious situation where we are continually told that inflation is not a problem because the core measure is low. The problem is that the “all items” inflation measure has a trajectory that (in recent months) is approximately 45% higher than core.

For the poor, the inflation they experience is much higher than core for two reasons. First, they spend much more of their non-shelter incomes on the items not measured by core inflation (including food and energy) and for local transportation which is one of the higher elements contained in the definition of core inflation. Secondly, the fastest rising food groups within the measure of food are the easiest to store and often the foods that the poorest among us are forced to consume.

When the Toronto Star published my shopping basket for the welfare diet in March, 2011, several readers countered with claims that the welfare diet could be shopped more inexpensively. I jumped into the fray and quickly agreed.

There are several ways to do it, I pointed out. First, you could ignore the fact that brand names were used in the welfare diet such as “Primo pasta” and “Quaker Oats”. That alone would be one way to knock about a dollar off the monthly bill.

You could also shop the same articles in bulk and buy them all in one place at one time. However, the weight of the welfare diet is somewhere between 80 and 100 pounds of food. Just think of the weight of 16 litres of milk, 12 cans of beans, and 10 pounds of potatoes alone. I have watched lone parents with children pulling their buggies just up from my local Superstore, across a bridge over the 401 with the wind howling and the snow blowing straight sideways. It’s a lot of fun! But I’m guessing the people who write these comments in the newspapers just may possibly have cars.

And on the topic of cars, power-shoppers routinely drive their cars and vans to different stores to pick up bargains. But they seldom count the 30+ cents a kilometre cost to run their cars that nullifies $3 in hard-fought bargains while travelling five kilometres out of their way (each way). Bargains cost money to access through transportation that the poor — and especially those receiving social assistance — either don’t have or must pay for.

But undeterred, I tried the power shop of the commentariat beelining for the bargains and lost leaders, ignoring the weight of the food, ignoring my transportation costs, substituting the lowest-cost, cheapest weight items in all instances, and assuming I had the safe, secure, and energy-efficient storage, freezing, refrigeration, and cooking facilities the poor seldom have.

There are just two problems. Social assistance has been increased by about only one-third of inflation since 1995. And with food prices skyrocketing, it will be the last chance for the inflation-equivalent power shop.

So, to all you power shopping commentators: “Enjoy it while you can!”

(John Stapleton worked for the Ontario Ministry of Community and Social Services for 28 years in the areas of social assistance and policy and operations. He now serves on the Board of Directors of the Daily Food Bank.)