No excuse for any Canadian to be poor, hungry, homeless
Author(s):
Ed Finn
March 1, 2007

Mathematics is not my forte. I was always more interested in words than numbers. But working closely with researchers and economists has made me appreciate the importance of statistics. Most of the policy alternatives the CCPA develops are grounded as much in figures as in facts—and rightly so. The most effective way to promote any change in economic or social policy is to prove, statistically, that such a change is financially feasible.

At the end of this article you will see a lot of dollar figures in a table that records the increase in Canada’s Gross Domestic Product (GDP) from 1970 to 2005. More importantly, the table lists the increase in per capita GDP. This is the amount that each Canadian man, woman and child would receive if the GDP—the total wealth produced by our economy each year—were divided equally among all the country’s inhabitants.

Keep in mind that the annual increase in GDP shown in the table is in constant dollars. All the amounts have been converted into the value of the Canadian dollar in 1997, to adjust for the effects of inflation. So the dollars in the 2005 per capita GDP have exactly the same value, or purchasing power, as the dollars in the 1970 figure.

Now, nobody is suggesting that the GDP could or should be divided into equal shares for everyone. There are plausible reasons why some people are paid more than others, having to do with different levels of skill, experience, risk-taking, responsibility, leadership, and a host of other variables. But the figures in this table still make it crystal clear that the wealth generated in Canada—most of it by workers--is being inexcusably maldistributed.

Maybe it’s Utopian—even foolish--to think that every individual Canadian, regardless of his or her age or contribution to the economy, is worth $36,000 a year. But surely it is far less justifiable that a few Canadians are wallowing in wealth while millions of others are mired in poverty.

The statistics in the adjoining table also decisively demolish the often-heard excuse that Canada can’t afford more social spending--can’t afford a national child care plan, or national Pharmacare, or tuition-free post-secondary education, or higher public pensions, or more generous UI benefits, or any other improvements in our social programs.

These figures don’t lie. Our economy is producing more than twice the wealth, in real terms, than it did in the 1970s, when most of our social programs were at their peak. No one asked then where the money was coming from to build and maintain these bulwarks of a welfare state. No one—except for the odd right-wing ideologue--claimed we couldn’t afford them. But today, when the country is more than twice as rich, we’re being told by our political and business élites that we don’t have the money to make life secure and decent for millions of Canadians.

It’s not that the money doesn’t exist; it’s where it winds up: more and more of it in fewer and fewer pockets. Even worse, the most affluent among us are not paying—not being compelled to pay—their fair share of the tax revenue needed to raise social spending.

Look at this table again. What it screams at us is that, in a nation with so much money, the prevalence of poverty, hunger, homelessness, and every other social ill is inexcusable. Canada could easily achieve—even surpass—the levels of social and economic equality now enjoyed by the citizens of the Scandinavian countries.

Financially, in other words, the attainment of social justice in Canada is well within our reach. We may lack the vision. We may lack the resolve. We may even lack the motivation. But what we most definitely do not lack, as a nation, is the money.

It took nearly two months to dig up the data in the table on the opposite page. You won’t find it anywhere else, certainly not in the mainstream media, so clip it out or photocopy it and keep it in your wallet or purse. And the next time anyone tells you any proposed social betterment is beyond our country’s means, take it out and show it to them.

With figures like these to back up your words, you won’t lose the argument. 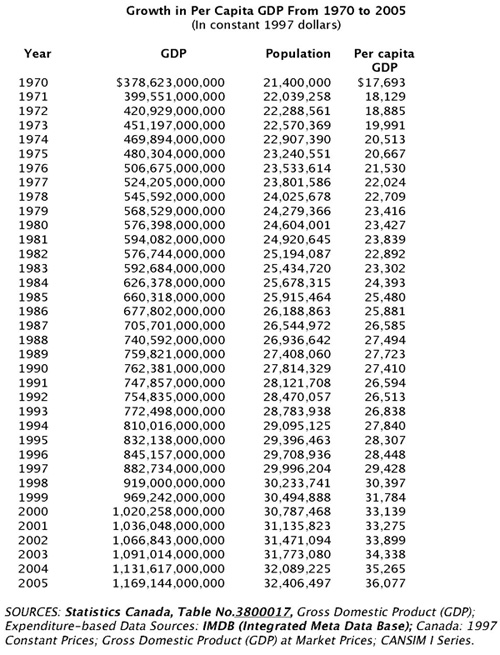