Ten years after the crash, is any aspect of our daily lives unfettered by the influence of finance capital? It is clear enough that neoliberalism has permeated most layers of public governance, most social interactions, to create a legacy of starved public services, wealth inequality and powerful global capitalism. Surely art has been spared, especially in the contemporary form, which can be an expression of emotion and beauty, or even a space where criticism, resistance and subversiveness are not only allowed but expected. Max Haiven argues instead that art and money cannot be disassociated; that art is in fact dependent on capitalism and in no way apart from it.

In Art After Money, Money After Art, Haiven explores the many intersections of money and art. He starts his new book with a review of artists who have used money to challenge the economic system—in the 1970s, when neoliberalism was still an experiment, and in today’s reality. Haiven applies definitions of financialization to art to see how far the process has spread to more creative spheres and to determine its workings. Financialization—the growth in importance of finance in the economy, and market relationships in most social interactions—is both a goal and an outcome of contemporary art, he claims. And yet art, and what he calls the “radical imagination,” can resist this outcome.

Haiven argues that the history of art as we know and experience it is intrinsically linked to access to wealth and money. The space allowed for contemporary art to grow as a form of creative human expression was facilitated, not impeded, by capital. This should concern anyone hoping to build an alternative to financialized capitalism, Haiven argues, since it makes it harder for artists today to be on the frontlines of anticapitalist resistance.

On the one hand, finance capital celebrates the “creative class,” using money to “art wash” their public image and prey on new markets opened up by gentrifying creative urban neighborhoods. The individual artist, on the other hand, more often than not remains precariously employed, laying the groundwork for what is frequently called the gig economy. While the financialization of art may only represent a small share of the world’s markets, if social movements are going to take up the mantle of expressing resistance through art, they must be aware of these risks, pitfalls and contradictions, says Haiven.

It is one of the book’s strengths to have documented and categorized real-life artworks that can serve to inspire younger critical artists to continue challenging the dominant state of things, while recognizing the limits of the discipline of art itself. Haiven provides many examples of artists who have, over many decades, used money (cash, coins, bills) as their object and dared to create a counternarrative to capitalism.

For example, the late American artist J.S.G. Boggs was well known for replicating banknotes using pen and ink. He would replace the official signature on the bills with this own, or even put his image where the appropriate former president’s should go. In these and other ways, Boggs toyed with the idea of value that comes from selling drawings of money as art. 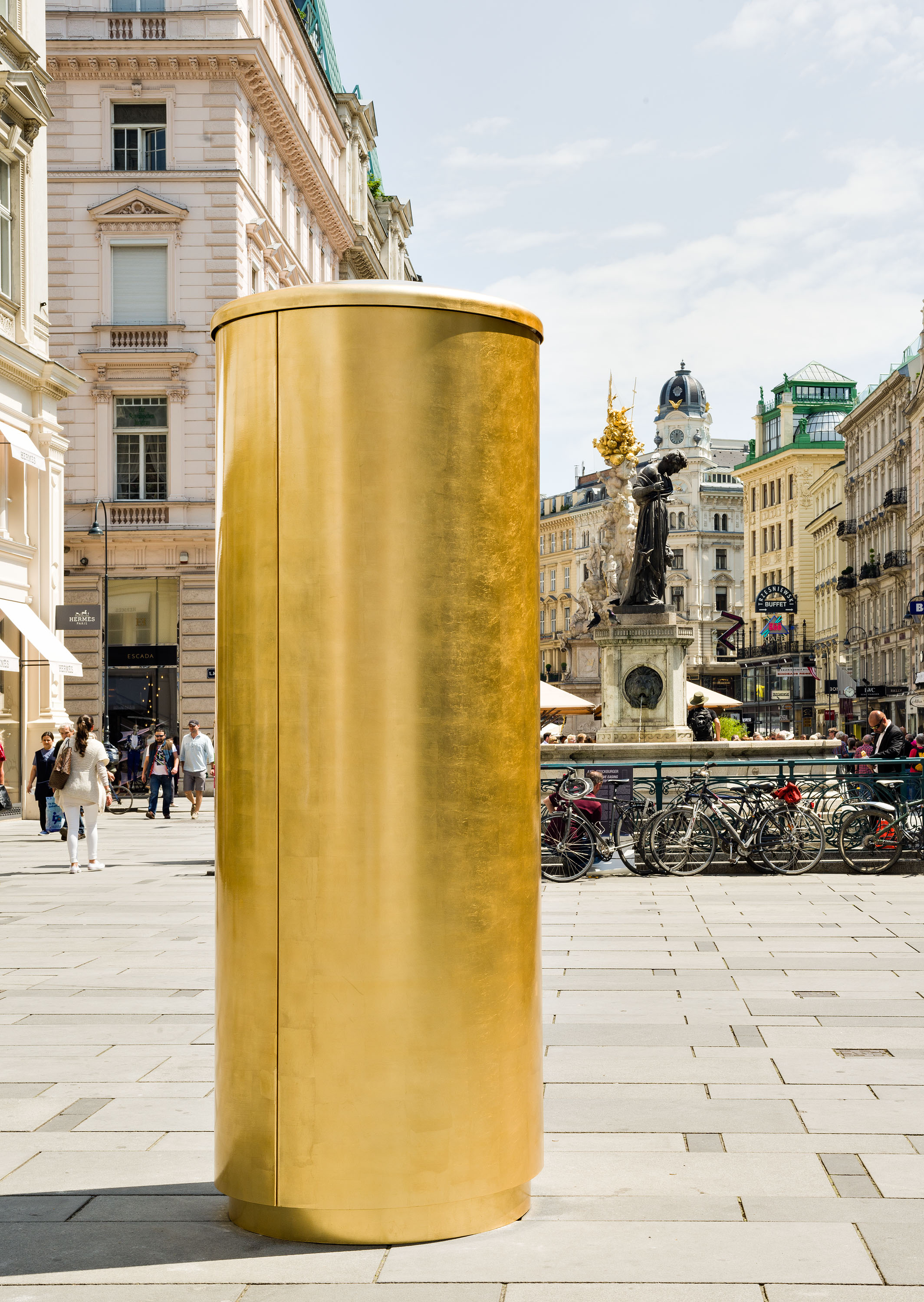 In Axel Stockburger’s 2014 Quantitative Easing (for the street) (pictured), the artist installed a large golden pillar in the busy centre of Vienna. At random intervals the structure would spit a one euro coin onto the street. Passersby grappled with the choice of either reaching for the rarity that is free money, or watching others expect more unpredictable wealth to be ejected from such a mysterious, material donor. Haiven sees in Stockburger’s creation the cruel optimism brought upon by capitalism and depicted by art.

Haiven focuses on contemporary art because of its polyvalent qualities—as a conduit for finance capital. Ultimately, the author believes both art (contemporary/financialized) and money should be abolished rather than saved. To get there, he draws inspiration from Black Liberation struggles, especially abolitionist thinkers such as Angela Davis and Ruth Wilson Gilmore, and aims to provide a pathway to develop strategies that will “work within, against and beyond dominant institutions.” Haiven concludes by advocating an approach that combines ideas from feminism, Marxism, anti-colonialism and anti-racism to imagine a future beyond art and money.

This is a book that looks imaginatively beyond the possibilities of today. Instead of allowing the 10-year anniversary of the financial crash to discipline readers into further abandonment to the bleak, destructive current state of the world, Art after Money, Money after Art is a reminder that through all means possible, resistance and resilience are human traits as old, beautiful and powerful as artistic expression.

Roxanne Dubois is a labour activist, Franco-Ontarian and occasional writer. Based in Toronto, she spends most of her time organizing, educating and activating young people and precarious workers.