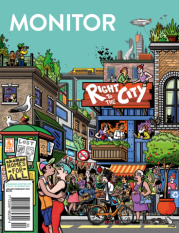 Ten years ago the political geographer David Harvey wrote, “The freedom to make and remake our cities and ourselves is…one of the most precious yet most neglected of our human rights.” With roots in 1960s civil rights struggles, Henri Levebvre's concept of a "right to the city" was revitalized by Harvey and others in the heat of the 2008 financial crisis and Occupy Wall Street. Since then, it has grown into a global movement for the “right of all inhabitants, present and future, permanent and temporary, to use, occupy and produce just, inclusive and sustainable cities, defined as a common good essential to a full and decent life.”

Contributors to this new year's edition of the Monitor find examples of the "right to the city" at work in Canada alongside formidable challenges to its collaborative, democratic vision for our urban centres. Here's a sample of what you'll find inside:

To receive the Monitor at home, please make a donation to the CCPA.