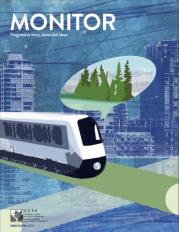 In the two years since Canada’s pandemic experience began, transit ridership across the country has plummeted. Or perhaps, more accurately, riders who had the ability to work remotely or the ability to find alternate transportation to work did so. Early in the pandemic, ridership in Toronto, for example, declined as much as 85% resulting in a $21 million per week revenue loss for the Toronto Transit Commission (TTC). In turn, the TTC laid off 450 employees and reduced service. Calgary saw a similar drop of 90%, while Vancouver reported an 83% drop in ridership early in the pandemic.

The result, the CBC reported, was TTC buses operating with passengers riding shoulder to shoulder for their ride, unable to safely distance themselves for their commute. The reporting journalist also noted that the communities most affected by overcrowded buses were the same racialized communities disproportionately impacted by the pandemic.

In August 2020, Statistics Canada reported “The vast majority (94%) of commuters who used public transit before the pandemic and who were not comfortable going back to their usual place of work cited "fear of using public transit" as a concern when they return to their workplace.

In Ottawa, the city’s P3 light rail train system, which had been unveiled just prior to the pandemic, has quite literally derailed during the pandemic. Initial investigations into the derailment have revealed that the private firm responsible for the train’s upkeep performed inadequate maintenance, leading to the LRT’s derailment.

A transit “death spiral” occurs when there is declining ridership on a transit system, which causes the system to post a deficit. The deficit triggers service cuts and/or fare hikes, which, in turn, lead to an even greater decline in ridership due to the inadequate service and steep cost to ride.

At the same time, the 2021 annual report from the UN Climate Change Conference of the Parties (COP26) advocated for a net-zero scenario, which would give humankind the greatest chance of surviving and mitigating the ongoing climate crisis. But achieving this requires a steep drop in demand for fossil fuels by 2030. Achieving this requires thriving, accessible transit systems across Canada.

The March/April issue of the Monitor explores saving, reinvesting in, and reimagining Canada’s public transit systems. What does a thriving accessible transit system look like? Where can we draw inspiration from? What lessons can we learn from Ottawa’s P3 experience?