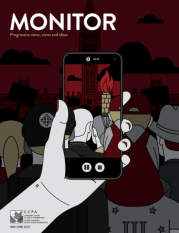 Radicalization has been documented as a process that occurs when “individuals are destabilized by various environmental factors, exposed to extremist ideology, and subsequently reinforced by members of their community.” It’s hard to think of an event in Canada’s recent history more destabilizing than the ongoing pandemic. Public health measures put in place to save lives and reduce demand on taxed health care infrastructures did more than disrupt the financial security of millions of Canadians. It eroded daily social routines and networks that people relied on and amplified the importance of online spaces.

At the same time that this was happening, the underreported but nonetheless scathing Facebook Papers revealed the social media site had an unsophisticated infrastructure for dealing with anti-vaccine misinformation. Whistleblower Frances Haugen revealed in October 2021 that the site’s algorithm was giving greater weight to “angry” reactions, meaning that content that incited angry reactions versus “like” reactions would be five times more likely to appear in a user’s feed.

Facebook was one of several social media sites used to organize both the January 6 Capitol riot and the “Freedom Convoy” Occupation of Ottawa in early 2022, which saw the nation’s capital occupied for 26 days. Facebook and Youtube allowed Occupation organizers to stream from the event in order to share information, encourage more participants to join them and doxx dissidents.

How do we take this moment as a harbinger, address the threat it represents and prevent a broader sea change that makes Canada more amenable to radicalized views?

When we examine how right wing spaces are becoming increasingly radicalized, it is critical to also create space to explore the impacts that this radicalization is having on marginalized communities.

While so much of the Canadian media’s attention was turned to the Ottawa occupation, on the other side of the border, another murder shook Asian American communities. Christina Yuna Lee was killed on February 13 in Lower Manhattan. Her death is one in a pattern of attacks against Asian Americans including the death of Michelle Alyssa Go and Yao Pan Ma. The New York Police Department has not yet named the attack against Ms. Lee a hate crime. However, as of December 2021, the NYPD had reported that anti-Asian hate crimes had increased 361% over the previous year.

In Canada last year, police-reported hate crimes targeting the east or southeast Asian population increased 301%. As we were going to print, more data was released confirming that anti-Asian hate crimes continue to rise, this time in Toronto.

Recognizing that the work of addressing radicalization is long and complicated, how do we centre the communities most affected by hatred and violence? How can we create spaces of safety, even in moments of uncertainty?