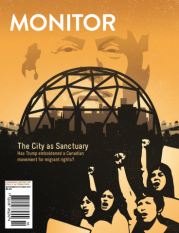 The Trudeau government has shone internationally on a progressive message of tolerance, openness, diversity and inclusive, sustainable economic growth. It says it wants to make globalization fair for everyone, and that, as the prime minister tweeted, Canada welcomes all people “fleeing persecution, terror & war.” But on a number of files the government has bent itself into a pretzel trying to square its beliefs with its actions. An underlying theme throughout this issue of the Monitor is the empty gesture. As migrant justice activists explain in our cover feature on sanctuary cities, it is perhaps more important today—with a self-described progressive government in office—to build grassroots solidarity for social change, without which there is no impetus for our leaders to follow through on their pledges. If we don’t do it, there are a growing number of people on the extreme right—in Canada as well as the U.S.—who think they can.

Here’s a sample of what you’ll find inside this issue. To receive the Monitor at home, please make a donation to the CCPA.