Two Canadian judicial decisions released in late May remind us that national security is incompatible with democracy: the former almost always trumps the latter. When doubts are raised about the fragility of democratic rights, as they were in the cases of Ottawa residents Mohamed Harkat and Hassan Diab, the national security state relies on its courts to provide legal reassurance that torture, indefinite detention without charge, secret trials, overseas military occupation, the iron curtain of governmental secrecy and other crimes of state can be rationalized as necessary byproducts of certain organizations’ duly authorized mandates.

Canadian courts have served this role most obediently. Their decisions almost unanimously start from the proposition that scandal-plagued bodies like the Canadian Security Intelligence Service (CSIS), the RCMP and the Department of Justice are composed of well-intentioned functionaries who may, in moments of excessive zeal, cross boundaries. Although this potentially implicates Canadian officials in severe human rights violations, no one is ever held to account. Despite two judicial inquiries finding Canadian complicity in the torture of four of its own citizens—a complicity usually overseen by justice department lawyers—not one official has been charged, much less tried, for their involvement. Rather, complicit individuals have received promotions or otherwise retired from public life, serving as commentators for the CBC or receiving puff profiles in the Toronto Star.

In the case of Mohamed Harkat, the Supreme Court ruled in May that the security certificate process that has held him in solitary confinement or under house arrest since 2002, on suspicion he posed a security threat to Canada, was “reasonable,” even though Harkat has yet to see the secret allegations or cross-examine the secret informants. Now facing deportation to torture in Algeria, Harkat is left with a poorly composed ruling that contradicts the Court’s own finding in 2007 that security certificates were unconstitutional precisely because the detainee did not know the case that had to be met. The Supreme Court commented on, but did nothing to correct, the fact that by law a judge in a security certificate case may receive into evidence and base their decision on anything not normally admissible in a court of law. This means, in essence, that Harkat, and anyone else subject to these secret hearings, is no longer in a court of law. 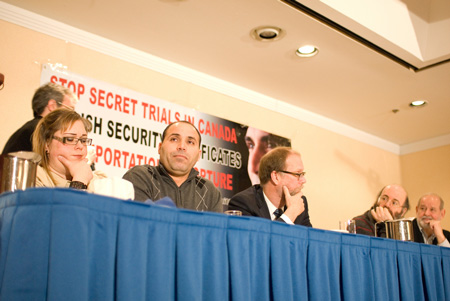 Justice Denied: Mohamed Harkat (second from left) with his wife, Sophie, and the author (second from right) at a 2010 press conference following the Federal Court decision upholding the security certificate against Harkat. (Photo by Secret Trial 5 Productions)

Hassan Diab faced a similarly disappointing ruling in May from the Ontario Court of Appeal, which upheld his extradition to France for alleged involvement in a 1980 Paris bombing, even though he has not been charged and the lower court judge hearing the case found it “weak,” “suspect” and “confusing,” and argued “the prospects of conviction in the context of a fair trial seem unlikely.” Diab’s physical description, finger and palm prints, and handwriting do not match those of the suspect sought by French police, but the Ottawa man serves the convenient role of scapegoat in a manner that has eerie parallels to the Dreyfus affair of a century ago. The low standards of extradition law, like in a security certificate proceeding, mean that basic Charter rights and freedoms are cast aside in the name of security (or pleasing an extradition partner).

The stink of complicity in torture hangs over the rulings. For Diab, it is unsourced “intelligence” which may have been gleaned from the dungeons of Syria, given the country’s historically close intelligence relationship with France. For Harkat, it is the spectre of what may come: the Supreme Court in 2002 left open the possibility that, contrary to international and domestic law obligations, individuals could be deported to torture under certain undefined “exceptional circumstances.”

In an era when the human rights violations associated with national security enforcement rarely make the news—at best, they serve as footnotes to stories marking the anniversary of the September 11, 2001 attacks against the United States—the Harkat and Diab cases are important reminders that the courts, intelligence agencies and a variety of federal departments continue to pursue their own private war of terror against some of this country’s most vulnerable and marginalized residents. CSIS community “visits”—knocking on residences, showing up unannounced in workplaces, spying on mosques, pressuring individuals to become spies in exchange for enhanced status in Canada—continue unabated. Along with the RCMP, the Canadian Border Services Agency and the War Dept., CSIS also operates under agreements allowing them to trade information gleaned from torture.

None of this is news to indigenous communities, for whom rendition to torture, otherwise known as kidnapping and disappearance into the residential school system, is nothing new. Whether it is RCMP repression of communities resisting fracking in New Brunswick or the War Dept.’s counter-intelligence team devoting almost all of 2013 to spying on Idle No More protests, indigenous people continue to be the guinea pigs on whom the tools of repression, demonization and dehumanization are first practised. They have always been subject to the process of becoming unpeople—those outside the community of individuals deemed worthy of universal human rights.

Growing numbers of unpeople in Canada are often found in targeted immigrant communities; they are people who came here to escape such repression. Hundreds of asylum seekers face inadmissibilityproceedings that doom them to indefinite limbo in Canada or eventual deportation to grave risk abroad. While many of these cases involve governmental secrecy—the Supreme Court made no comment about submissions in the Harkat case that showed the government had invoked secrecy in over 100 immigration cases since 2008—others are based on a crass use of the terrorism brand.

Nowhere is that dangerous power more obvious than in the case of José Figueroa, currently living in sanctuary in a British Columbia church. Canada declared him inadmissible because of his association with the FMLN, a former resistance organization that fought the brutal junta in El Salvador during the 1980s and which is now the ruling political party. An immigration bureaucrat decided that the FMLN was a terrorist organization, even though the Canadian government has made no such declaration. In fact, Canada sent high-level officials to the FMLN’s inauguration in San Salvador.

The Immigration and Refugee Board (IRB) member who heard Figueroa’s case quoted from the Salvadoran Truth Commission, saying it: “never referred to the FMLN as a terrorist organization. That’s clear. It referred to the group as a political organization. On the other hand, it did refer to the terrorism through the death squads of the government.” The IRB member then said: “I can’t argue that a repressive regime that makes use of death squads needs to be changed. Nobody can argue with that… What the people appear to have been trying to do was to stop a regime that ran death squads. There’s some legitimacy, I would say, in trying to arrange matters so that death squads can be eliminated.”

Despite these findings, as well as an internal governmental recommendation that Figueroa be granted permanent residency on humanitarian and compassionate grounds, the federal government is insisting that its ideological choices trump both the law and logic. Several other FMLN-related cases are ongoing, and hundreds of Palestinians, Tamils, Iraqis, Kurds, Libyans and others who have resisted tyranny in their homelands also now face “security inadmissibility” hearings after coming to Canada.

Meanwhile, the arbitrary use of the terror brand is afflicting humanitarian aid groups. Ottawa’s naming of IRFAN (International Relief Fund for the Afflicted and Needy) as a terrorist group has shut down a vital contributor of medical and social relief in the Gaza Strip. The government’s decision to declare the Taliban a terrorist entity restricts the ability of aid groups to negotiate the delicate terrain of delivering conflict zone services.

The daily grind of Canada’s immigration system, which imprisons tens of thousands without charge and notches up deportations in equally shocking numbers, reminds us of how the slander of “terrorist,” “security risk,” or “inadmissible” creates exiles who become unpeople to whom anything can be done in the name of national security. If they are of Iranian descent, the TD Bank will close their accounts without notice. If they were born in certain designated countries and come to Canada as asylum seekers, they will be denied health care and an appeal of any negative decision. If they face torture, Ottawa will claim that exceptional circumstances require that electrical charges be placed on their testicles. Even the protection of citizenship can be revoked under new legislation.

Impunity pervades government departments subject to numerous torture-related lawsuits. Benamar Benatta, Abdullah Almalki, Ahmad El-Maati, Muayyed Nureddin and Abousfian Abdelrazik, all tortured with Canadian complicity, continue seeking apologies, compensation, and the clearing of their names in protracted court proceedings designed to wear down their spirit. Even for those cleared, there is no ability to move on. Maher Arar received an apology and monetary compensation for Canadian complicity in his torture but he cannot travel to the U.S. to receive a human rights award. Hassan Almrei, who after almost ten years in solitary confinement was cleared by a Federal Court judge in his secret trial case, now faces inadmissibility proceedings based on the same allegations that have been judicially declared “unreasonable.” Adil Charkaoui, whose security certificate was withdrawn, continues to face smears against his good name, leaked to the media by intelligence agencies.

As in Kafka’s The Trial, even an acquittal brings no measure of relief. And so the long, hard work of walking in solidarity with targeted individuals and communities is needed now more than ever. A key part of that work is refusing to buy into the fear that isolates and marginalizes those in the government’s crosshairs.

Matthew Behrens is a freelance writer and social justice advocate who coordinates the Homes not Bombs non-violent direct action network. He has worked closely with the targets of Canadian and U.S. "national security" profiling for many years.