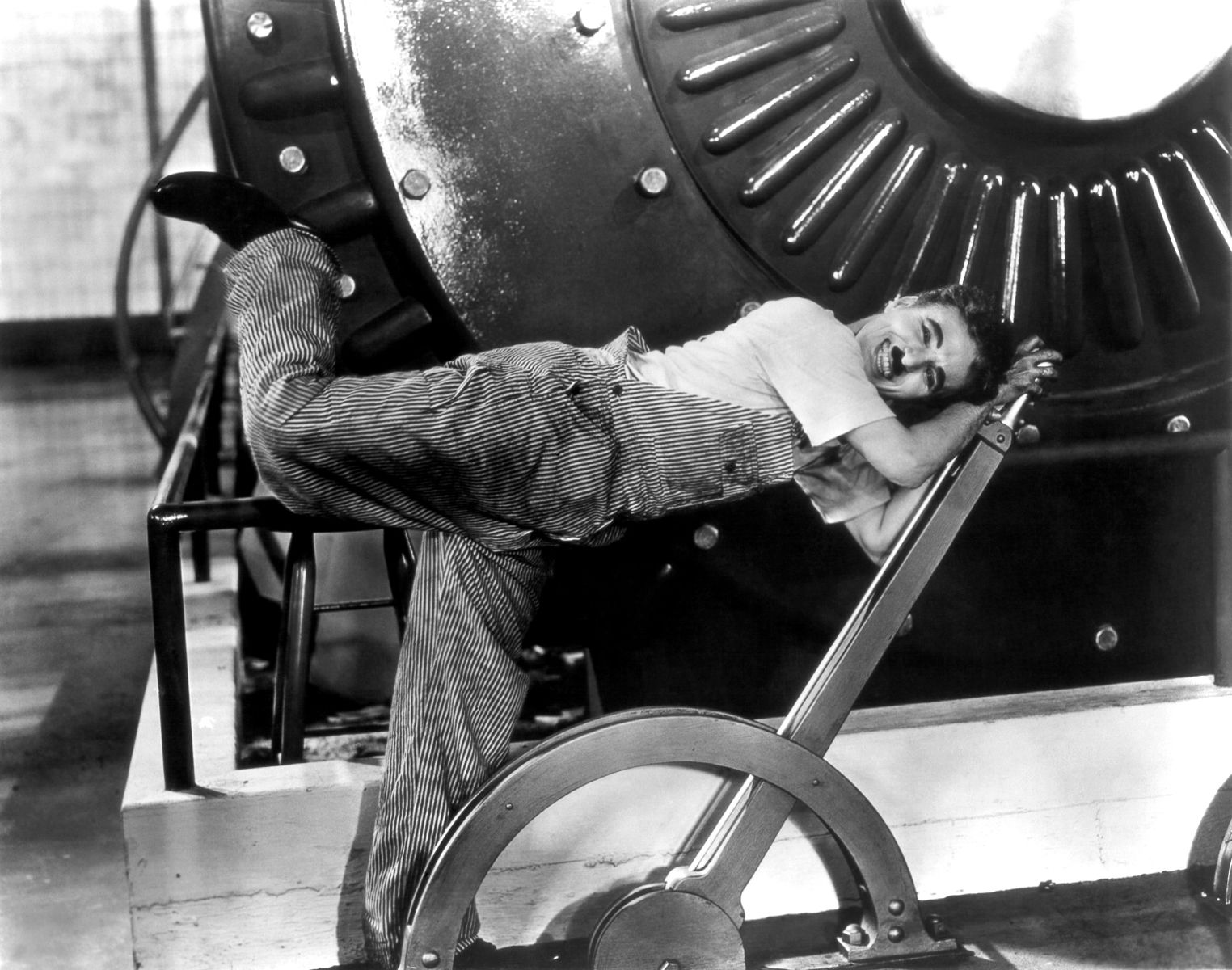 We can all relate to Charlie Chaplin in his classic film Modern Times. As the Little Tramp falls behind on the production line, the conveyor belt pulls him into the factory’s cogs. We might laugh as he winds through the gears, but we too are working in a factory of sorts. It is a vast factory assembling our attention and its output affects how we produce and consume culture.

Canadian media regulators have begun using the term discoverability to describe these new conditions of cultural production, distribution and reception. A recent Discoverability Summit in Toronto, co-hosted by the National Film Board (NFB) and the Canadian Radio-Television and Telecommunications Commission (CRTC), devoted two days of panels to the topic. The CRTC introduced discoverability as a defining feature of an Internet-enabled “world of choice” where “content is available everywhere, on so many platforms.” Eighty-two per cent of Canadians watch or download TV and movies online using services like Netflix, itself a powerful part of the factory built to manage our attention and influence our cultural consumption.

How does Netflix influence what content we watch? Depending on the device, about 50% of the screen will be dedicated to advertising a specific show or movie (usually one of Netflix's own productions). Below Netflix’s promoted content you’ll likely find a few strips containing recommendations under the headings New to Netflix, Saved to Your List, Trending or Recommended for You. The Canadian Media Fund (CMF) calls these the levers of discoverability in a recent study. As regulators seek to understand this new factory, these levers and who pulls them demand more analysis.

Algorithms, suggested the CMF report, are an important lever. These computational functions use data to rank, sort and rate content or decide what’s trending. Algorithms might use data from other customers to recommend a new show. Or they might use metadata to suggest other titles in one of Netflix’s micro-genres, such as Independent Drama Featuring a Strong Female Lead.

We constantly interact with algorithms to discover content, often without being aware of the long-term effects of our feedback. This process has led to concerns about an overly personalized internet as we unintentionally train algorithms to offer a limited set of recommendations.

While most of us pull levers unconsciously, clearly some people know the right ones to pull. Micro-celebrities, clickbait bards and viral video editors are a new kind of elite in the discoverability factory. Their craft differs by platform. Reply Girls game YouTube’s thumbnail system. Search Engine Optimization specialists (for a fee) will boost your website’s ranking on Google. It is not exactly clear how they’re operating the machine, but their success demonstrates the inequities of online attention.

All this talk of algorithms and social media celebrities might obscure the most important piece of the machine: the content discovery platforms themselves. In the attention factory, platforms remain a black box whose workings we don’t really understand. Facebook for years claimed its trending news section was algorithmically curated until Gizmodo and the Guardian U.K. discovered that a team of journalists frequently injectedstories into the list of trends (see article in this section by Davis Carr). We shouldn’t be shocked that humans are involved, but we should debate the accountability of these platforms.

The front page of platforms—or what at the summit was called the First Impression Unit—remains a major lever of online attention. By managing these first impressions, platforms have an important influence on discoverability, not unlike a broadcaster’s power to decide what content appears in prime time. Netflix, for example, uses its front page predominately to promote its own content. Platforms can also sell their influence. Your next smart TV might feature ads on your home screen as device manufacturers find ways to exploit this new revenue stream. That might be the only way independent or other studios can compete with Netflix for attention.

These levers play an important role in the new attention factory and they require continued regulatory oversight. The good news is that Canadian media regulators like the CRTC have a legacy that makes them well-suited to address discoverability as a major issue for broadcasting. While the attention factory might seem newfangled, old questions of media globalization, cultural policy and democratic oversight remain relevant.

Like Chaplin squeezed between two big gears, Canada is in a tough spot, facing significant domestic and global media concentration. If more digital concentration continues, the machine might be controlled by Google, Apple, Facebook, Amazon and Netflix alone, putting a squeeze on local governance. Google and Netflix have publicly flaunted the CRTC’s authority, thereby undermining Canadian democratic oversight. It could be Canada seeks to harmonize oversight of the factory so its global pieces are subject to the same oversight as local ones.

Another approach to discoverability in Canada would be to explore the viability of platform-focused regulations developed in Europe. The EU has called for Netflix and Amazon to ensure that at least 20% of their video libraries consist of European content. Their concern over online media providers offering a new channel for American cultural dominance connects with growing worries about the unchecked economic power of Google, Apple, Facebook and Amazon (or GAFA). The EU has investigated the monopoly power of Google, implemented a “right to be forgotten” so people can opt-out of the platform’s data collection and enforced greater privacy protection of international social media data flows.

A broader first step would be to open up the machine to public oversight. The Discoverability Summit was an important opportunity for the CRTC to publicize these issues. Accountability is a matter of public concern as seen in the debate over Facebook’s trending news, though the scandal seems to have rattled the machine less in Canada than in the U.S. Does the same team of young journalists also manage Canadian trends? The manual leaked by the Guardian suggests so with reference to an ability to change the scope of the trending data and a reference to the Toronto Football Club. Could there be a review of Facebook and other platforms’ mechanisms that decide what’s trending in Canada?

Canadian cultural institutions should continue to have an active role in promoting and supporting Canadian content in this attention factory. Many state-sponsored cultural institutions developed out of legitimate concerns that the economic might of the United States would hinder homegrown cultural industries. The CBC started in response to concerns about American cultural annexation. Could public service media play a meaningful part in this new attention factory?

We would do well to avoid nostalgia for traditional Canadian content in thinking of the new role for public service media. Diversity remains a real issue for the Canadian cultural industries overall, as seen in the lack of coverage for the #BlackLivesMatter movement in Toronto, as well as concerns about regionalism, race and gender representation in newsrooms and television production. These issues abound online.

Taking up the issue of discoverability could encourage new voices, but emerging online platforms might not offer the best venue for them. Toxic cultures like GamerGate and the Red Pill movement have been effective in silencing and pressuring feminist voices too often while we look on. Wikipedia has recognized it has a problem with a lack of diversity among its editors, which negatively influences its content. Could Canadian cultural institutions play a positive role in user-generated discovery in the same way that feminists have led edit-a-thons to promote underrepresented histories and peoples on Wikipedia? No one can discover content if it is not there.

Simultaneously, the conditions of cultural production on these platforms can be economically exploitative, or what’s been called platform capitalism. These necessary new voices might toil away for free in what Tamara Sheppard calls apprenticeship labour. Could a new generation of public service media be a big piece of a better attention factory? Could a better platform be created for Canadian content producers? Could Canada develop a platform that ensures artists receive a greater share of advertising revenue and offers more accountable management of content recommendation? Perhaps the CBC in its redesign of its shuttered comments might create a more supportive community for cultural production? A Canadian Reddit? Maybe an alternative platform might be too much domestically, but perhaps in collaboration with other international institutions?

Discoverability has reassembled the attention factory but not necessarily democratized it or made it more equitable. The worst case scenario would be a world where discoverability is both profoundly confusing and totally lacking in accountability or oversight. That's why the Discoverability Summit was a critical start. In looking ahead, the point to keep in mind, to remember my late colleague Martin Allor, is that “our task is to change the world, not merely to describe it.”

This article was published in the July/August 2016 issue of The Monitor. Click here for more or to download the whole issue.