Home › Publications › The Monitor › Next top, a subway that works

Next top, a subway that works

The provincial election is an opportunity to move away from slogan-based transit planning
Author(s):
Matt Elliott
May 1, 2018 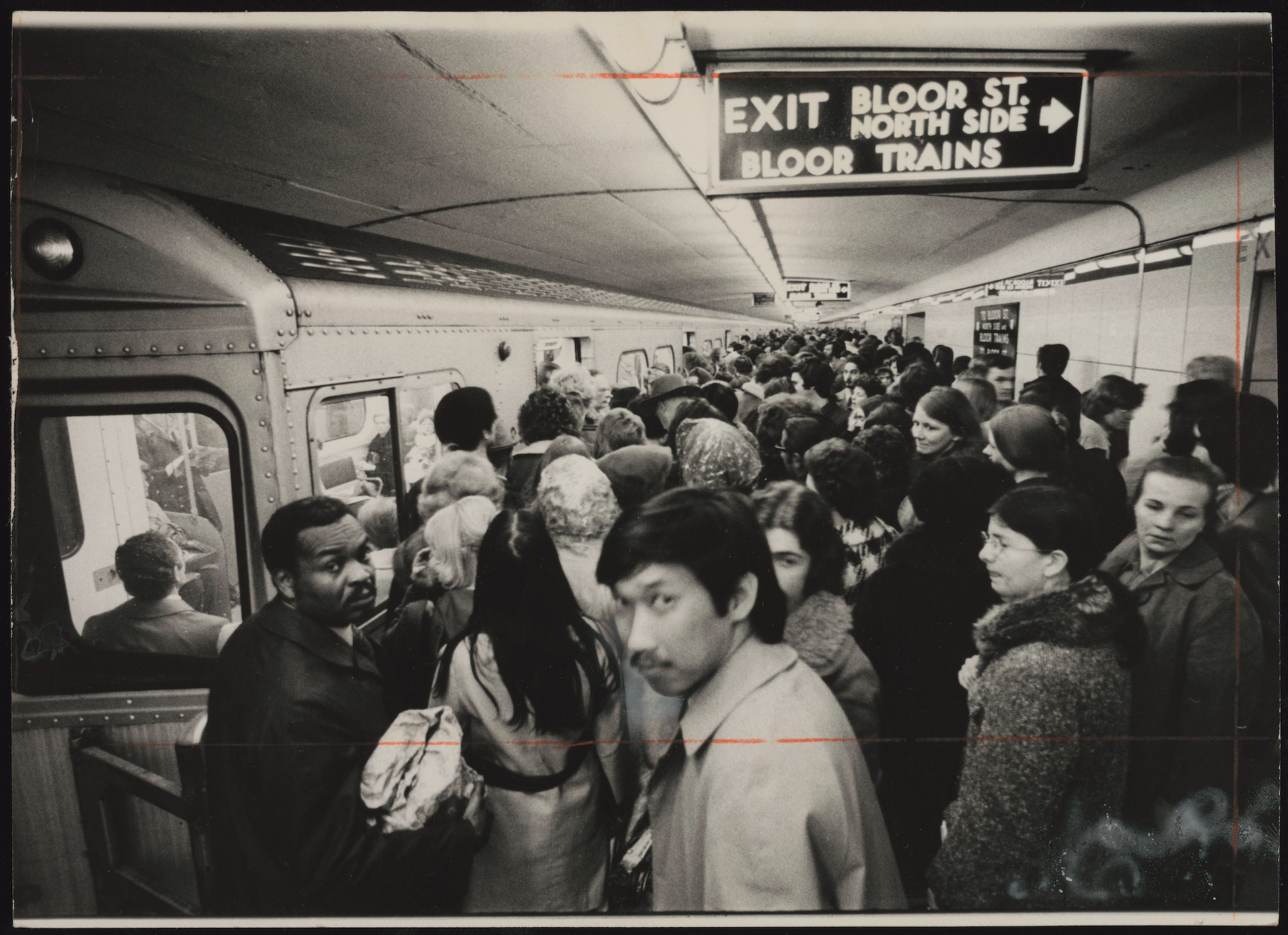 Though Ford’s personal role in this story never went much further than the 2012 soundbite, the mayor’s populist demand for “subways, subways, subways” eventually won support and funding commitments—from all three levels of government—for a Toronto subway link to Scarborough. In the years since, however, the project has become one of the most divisive and heated issues in Toronto politics.

The subway saga is poised to play a not insignificant role in the Ontario election, which is a good thing. Major parties hoping to control Queen’s Park owe it to voters to declare whether they support (politically and financially) the Scarborough subway plan on the books, and how that support fits within their larger transportation plans for the Toronto region.

First, let’s back up. Though recent debates about the Scarborough subway often focus on arcane technicalities and funding disputes, the extension itself is relatively simple.

The existing Scarborough RT transit line, opened in 1985, is in bad shape and requires major refurbishment. Proof that ill-advised Toronto transit decisions are not a new thing, the RT was built using an untested, provincially developed technology whose success in the field was supposed to attract interest—and buyers—from transit systems all over the world. It didn’t work out quite like that.

The RT had trouble in the snow—kind of a problem in Toronto—and few other cities showed interest in the technology, which was bought by Bombardier in a series of hasty deals. Government attempts to work with the company on upgrades to refurbish the RT proved costly and challenging (sound familiar?). And so, in 2006, the Toronto Transit Commission started looking at options for wholesale replacement.

Initially, officials zeroed in on a light rail option, part of a region-wide LRT plan backed by former Toronto mayor David Miller called Transit City. The Scarborough LRT would have followed the existing RT route but with a new northerly extension. The plan was approved and later packaged into a master agreement with the provincial government. As part of the deal, the province agreed to pay all capital costs associated with the project.

Here’s where Rob Ford comes in. The populist’s startling 2010 election win, and his rabble-rousing on subways two years later, sparked a new idea that found majority support on city council and among Liberal legislators (MPPs) looking ahead to a 2013 byelection in Scarborough: what about just building a subway instead?

Extending the Bloor-Danforth subway line into Scarborough would achieve two things. First, because it would have to be built along a new route, the subway option would allow the RT to continue operating during construction, which wouldn’t be possible with the LRT. Second, it would be a subway, subway, subway, and people like those.

Switching from LRT to a subway would cost Toronto about $75 million in sunk costs (to be paid back to the province) and required the city to commit to covering all cost overruns and assuming full responsibility for maintenance. But hey, the result would be a subway. Moving things further along, the Harper government of the day agreed to kick in $660 million.

In the initial proposal, the subway extension was to have three stops. But that plan was approved with only the barest of cost estimates. As the cost climbed, Mayor John Tory whittled the subway down to a so-called express plan, with six kilometres of track and one station located at the Scarborough Town Centre shopping mall.

That’s where the plan remains today. The cost? Well, it depends who you ask. City staff say somewhere in the neighbourhood of $3.35 billion—a whole lot more than the LRT, which was originally pegged at just under $1.5 billion—but with a boatload of caveats, since the estimate was made before any design work had been completed. A revised estimate is due out in 2019. All bets are that it will be higher.

The opening date for the subway is very tentatively set for 2026. But given the roller-coaster-ride history of this project, the odds of that happening, without further changes, are not very good. And this year’s provincial election will surely be a factor in the project’s future.

So, where do the various parties stand? Let’s dig in.

Even with Ford’s enthusiasm, and a majority of Toronto city councillors in favour of the subway option, it would not have become a reality without the sudden and enthusiastic support of the Ontario Liberals.
The Scarborough-Guildwood byelection in 2013 saw the party unceremoniously ditch its previous support for the LRT plan and go all-in on subways. Mitzie Hunter, the Liberal candidate in that election, and Glen Murray, then transportation minister, dubbed themselves “Subway Champions,” while Premier Kathleen Wynne also expressed her support. It worked. Hunter took the day.

Liberal support for the subway also came with another benefit. Whereas under the LRT plan the province committed to paying all costs, the provincial contribution to the subway was capped at about $1.5 billion (in 2010 dollars), with no future obligation to pay any maintenance or operating costs.

From a purely political perspective, the Liberals’ Scarborough subway gambit was a win all around. The party has since shown no sign of changing course, even as the city struggles with mounting subway costs. “I have always deferred to city council in terms of plans,” Wynne told reporters in 2016.

In a bid to demonstrate that Progressive Conservatives are even bigger subway champions than the governing Liberals, short-lived party leader Patrick Brown promised not just to support the Scarborough line, but to pay for the whole darn thing, Toronto’s share and all.

This was music to the ears of Mayor Tory and many councillors who believe costs will continue to mount. But it comes with a catch: the PC platform also calls for Queen’s Park to take ownership of all TTC subway tracks, tunnels and stations, and assume responsibility for planning and building new subway lines. (Wynne’s Liberals have also floated a version of this idea, pledging to study it should they win re-election.)

That would be a big shift for Toronto, cutting the mayor and councillors out of the planning process for subways while leaving the city on the hook for costly bus and streetcar routes.

New PC leader Doug Ford further muddies the waters. The former Toronto councillor, and brother of the mayor who helped launch this saga, has lately described transit as his “speciality” while promising to double-down on the kind of transit politics that led to the Scarborough Subway in the first place.

Talking to reporters on March 28, Ford promised to add back the two stops eliminated from the Scarborough plan and extend the subway further to connect to the existing rail line on Sheppard Avenue. It’s unclear exactly how much this would cost, or who would pay for it, or how many would ride this new transit infrastructure.

Despite running Adam Giambrone—the former TTC chair who was instrumental in developing the LRT plan—in the Scarborough-Guildwood byelection in 2013, the Ontario NDP also jumped on board the Scarborough subway support train. In fact, NDP candidates in Scarborough have consistently boosted the project, and party leader Andrea Horwath has not called for modifications let alone cancellation.

There are some signs the NDP view may be shifting. Felicia Samuel, who is set to run for the party this year in the riding of Scarborough-Rouge River, signed her name to a TTC Riders petition formally asking the Liberals to conduct a study comparing the LRT with the subway.

And the NDP’s new platform omits any mention of the Scarborough subway, focusing instead on the much-needed relief line subway through downtown Toronto. The platform also admonishes Wynne for “ripping up Toronto’s ambitious Transit City plan”—a plan that included the Scarborough LRT instead of the subway.

It’s not like better transit strategies don’t already exist. The relief line plugged in the NDP platform, a subway project first proposed more than a century ago, would run through the east side of downtown Toronto, providing an alternate route to the core. Former TTC CEO Andy Byford called it his top priority, claiming it’s the only project that would relieve the constant—and often dangerous—overcrowding on the Yonge Street subway line.

Despite a clear need for the line in Toronto, the project hasn’t found enough champions. To date, the provincial and federal governments have committed only to paying for preliminary planning costs, but it’s been a challenge to find politicians willing to commit to covering a real share of the approximately $7 billion needed to build the line.

Making that pledge, as the NDP do in their election platform, makes a statement. Even better would be for a provincial party to spend the campaign period establishing its commitment to transit planning based not on political considerations but on evidence, including ridership data, which strongly supports the relief line. That kind of commitment would include taking a fresh look at the merits of the Scarborough subway relative to the LRT plan.

Mostly, though, it would mean finally moving on from the transit populism of the Rob Ford era. Evidence-based transit planning may not be as smooth a slogan as subways, subways, subways, but it would be better at moving people around a busy and growing city.

Matt Elliott is a city columnist and blogger with Metro Toronto and a professor of journalism at Humber college.